This past weekend, members of the Santa Clara Vanguard, along with the Vanguard Cadets, Vanguard Alumni Winter Guard, Vanguard brass ensemble and the Children's Adventure in Music (a program Santa Clara-area children from ages 4 to 12 learn a variety of dances genres) entertained almost 300 guest as part of its annual "Cultural Concert," held at Mission College in Santa Clara, Calif. 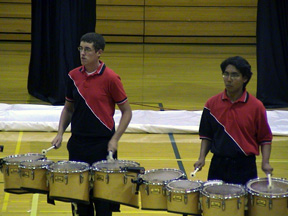 Members of the SCV Cadets's quad section perform at Mission College.
"Cultural concerts have been part of the organization since I was a member," said Santa Clara general manager Dan Vannatta. "I participated in a few back then. "This concert went extremely well, as it was the first time the Children's Adventure in Movement as well as the Alumni Winter guard took part in the performance," Vannatta said. Vannatta also took time to comment on how the Santa Clara Vanguard is progressing this season. "The spring is progressing well for the organization. Camps have been running smoothly, with Vanguard playing their entire brass book by December. The first full corps camp is scheduled for the end of April after WGI has completed their season. We are very excited about this coming season," Vannatta said.