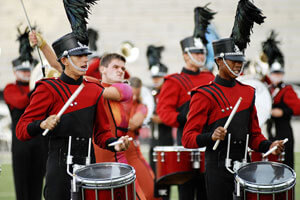 The Academy
DCI Houston presented by THE exSIGHTment OF SOUND, was hosted at Berry Athletic Complex in Cypress, Texas on July 16 and 17. The two-night event brought 22 corps to the field as part of the DCI Southwestern Series presented by Jupiter Band Instruments. The Houston scores were averaged together with the scores from Dallas in order to determine the order the corps would perform at the DCI Southwestern Championship in San Antonio on July 18. Both nights were stacked with talent and high expectations. Coming out on top the first night in Houston was the Holy Name Cadets, besting Carolina Crown for the first time since the DCI Premier Event in Annapolis, Md. earlier in the season. DCI Dallas presented by the North Texas Festival of Drums and Bugles, saw Blue Devils remain at the top of the field with the only score in the 90s at either of the Thursday events. Night two of the Houston series brought even more hope and anticipation as the lineups traded venues to compete again. In Houston, Blue Devils stood their ground to retain the top spot; however, the Cavaliers joined them in the exclusive 90s club. In Dallas, Holy Name Cadets continued to stay ahead of Carolina Crown, but only by .6 on the score sheet. View photos from the DCI Houston events. Photos by Craig Olear