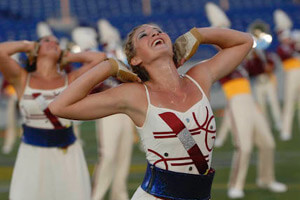 The Cadets
DCI Salutes America kicked off on June 20 in Annapolis, Md., as the first of several Drum Corps International Premier Events scheduled for 2009. The Saturday event was particularly special with a preshow ceremony dedicated to the announcement of DCI's new educational partnership with MENC: The National Association for Music Education. The U.S. Marine Drum & Bugle Corps was also on hand for an exhibition, in addition to the competitive performances of five World Class corps in attendance. The Holy Name Cadets, who are celebrating their 75th anniversary in 2009, took top honors for the night as they continue to set their sights on the season ahead and the DCI World Championships in Indianapolis August 6-8. View photos from this event. Read more about DCI Salutes America. Photos by Johnny Gilbert.