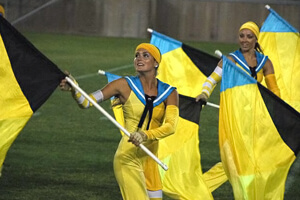 Blue Devils
The end of the first full week of competition on the DCI Tour was capped by an exciting West Coast performance in Stanford, Calif. The June 27 event had something for everyone, with All-Age, Open Class and World Class corps competing. Eleven corps took the field and showed the crowd that even though it was early in the season, they came to compete. The Blue Devils impressed the judges that night, earning their second score in the 80s in two consecutive nights. Santa Clara Vanguard and Bluecoats were right behind the Devils, their scores only separated by a few points. All of the corps are starting to feel the excitement as the season continues to roll along, and everyone has their sights set on World Championships in Indianapolis this August. View photos from this event Find an upcoming DCI Tour event near you! Photos courtesy Chris Maher, corpsreps.com