After a "difficult" opening weekend in California (the corps scored 70.50 in Hayward, and 71.75 in Pleasant Hill) according to director Sal Leone, the Seattle Cascades are "happy to be back in the Northwest where the weather is cooler," Leone said. 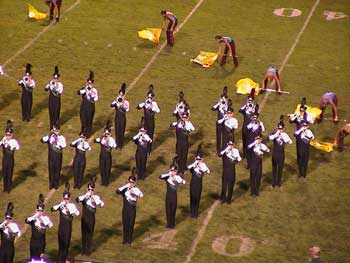 The Seattle Cascades perfrom in Stockton, Calif., last Friday night.
Back on the familiar soil near its home, the corps scored 71.40 in Woodburn, Ore., last night, behind the winning Blue Devils (82.25) and ahead of the Troopers (62.00). Back to last weekend. The record 100-degree temperatures severely affected the time the Cascades could practice, the corps' housing site for the Stockton show was 80 miles away from the contest venue, and the corps' equipment truck was delayed at the Oregon-California border for seven hours and was consequently late to the rehearsal site. These events proved to be exhausting for the corps. But despite the less-than-ideal conditions, Leone is happy with the corps' progress thus far. "We were very pleased with our start. We had problems with the weather and had vehicle problems, but after all is said and done, we're pleased," Leone said. Audiences are receiving the Cascades' 2003 program well, according to Leone. "Last year we were a big surprise. This year, people are expecting more. We don't have the surprise reaction anymore. They've reacted well to our powerful punch," Leone said.