From a Seattle Cascades press release: Flying high from the weekend, the Seattle Cascades completed their first camp with great success. More than 150 students journeyed to Seattle, despite an ice storm, snow-covered passes and vehicle breakdowns, to conduct the strongest camp in Cascades history.

Despite the absence of 14 people who were absent due to weather-related problems, the Cascades' brass section over the weekend contained 63 players, a corps camp record. 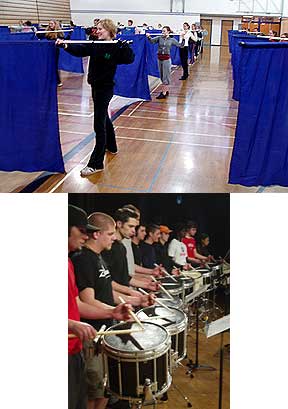 Scenes from a wintry weekend in the Pacific Northwest.
New brass caption head John Lack did an exceptional job of leading the brass section through the first camp of 2005. After the new technique exercises, the brass worked it way through the corps song of "Imagine" and through four minutes of Tim Salzman's wonderful arrangements. The students were even treated to Tim Salzman himself, as he lead two of the music ensemble rehearsals.

Guard members achieved a great turnout as well, considering it is winter guard season. 41 potential members thrilled in seeing each other again and were ready to sweat. "Clearly, with the strength of the returning vets and all the new talent, this is the strongest guard Seattle has ever had. I'm just so excited for us," stated guard caption head Jason Flores. The members got their good-byes in, as this is last camp for the guard until April.

The auditorium was the hub for the percussion section this weekend, an appropriate place for the anticipation of continued auditions. With the talent level raging, the percussion staff managed decisions in all sections, including narrowing the snares down to nine candidates. An older group than last season's percussion section, they delved into the opening piece of the program with the strength that maturity brings.