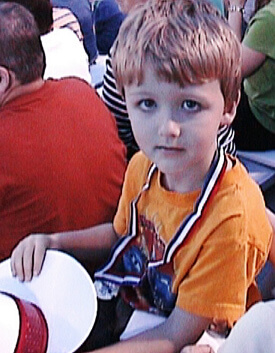 Four-year-old Ethan Tye was amazed when Madison Scouts Drum Major Steven Smith asked him to hold his hat and gold medal while Smith conducted the Scouts' encore concert and a vocal rendition of "You'll Never Walk Alone" at Drums Along the Red Cedar in Menomonie, Wis., on Father's Day. Ethan was even more amazed when Smith returned after his conducting duties, retrieved his hat and told Ethan he could keep the medal! Smith was probably not aware that Ethan's daddy was a member of the 1991 Star of Indiana World Champions. With this kind of major encouragement, Ethan may become a second-generation member of the drum corps fraternity. Thanks, Dan! The 2006 drum corps season is here, and we want to see your best shots! E-mail your pictures to forzato@dci.org, along with a description of where and when the photo was taken. Send some biographical information about yourself as well. We'll give you full credit.