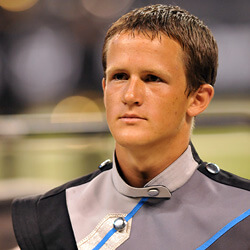 Craig Rude
Craig Rude, 18 Southern Illinois University Edwardsville Legends Front Ensemble, 2010 How did you choose your corps? I originally auditioned for Blue Stars for timpani and Capital Regiment for a keyboard position. Playing a board all summer was definitely my first choice. Unfortunately Capital Regiment was not able to field a corps last year, so many people had to go look elsewhere for a possible spot. I learned about Legends through a veteran member who was the marching tech at my high school. He suggested the corps and that I should audition for them. I contacted the pit caption head, Bill Boswell, and asked if there were any openings. Surely enough there were. I went to the next audition camp in January and before I knew it I was offered a spot. If one corps doesn't work out, opportunities are everywhere, you just have to go out there and find them. What was the experience like the first time you auditioned for a corps? At first I felt a little shy and nervous, and I kept thinking "Woah, this is drum corps." Once we started playing at my first camp with Capital Regiment, it was a very relaxed environment. What's the best way to prepare for an audition? By far, the best way anyone could prepare for an audition is to have all of the audition materials learned and memorized. Also, if you are reading this, you're doing the right thing by seeking testimonials. Before I auditioned, I did the same thing and that advice helped calm my nerves. What would you say to someone who is unsure whether or not to audition for a drum corps? Simple: Go to an audition camp. If you like the experience, keep working for it! Learn more about corps audition dates, locations and additional info.