Phantom Regiment director Pat Seidling and three other DCI veterans will be featured clinicians in Brazil during the next two weeks. 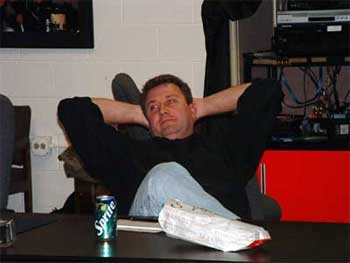 Pat Seidling listens intently at a recent DCI finance committee meeting.
Joining Seidling will be Clay Wacholz, a longtime Madison Scouts member and brass staffer (1985-1998) now living in Argentina, and John Grant, a former member of Blue Devils (1996), who currently lives in Brazil. Also part of the clinic will be native Brazilian Leandro Pascui, who was in the Blue Stars' front line in 2003. Seidling will be a featured clinician for a band camp that is much like the BOA Summer Symposium (it's summer in Brazil right now) and later will be teaching at a weekend camp with the Collegio Progress Marching Band, a group he has been working with since 1998. Wacholz, Grant and Pascui will join him for these events as well. To take a look at the Collegio Progress Marching Band Web site, go HERE.To look at the Web site for Brazil's version of DCI.org, go HERE. Several Brazilian band directors will be visiting the Phantom Regiment on our tour this summer, and one student is hoping to get visa clearance in order to come on tour and work the metronome while learning about American-style drum corps.