Cooper Ottum of the Oregon Crusaders sent this one in: 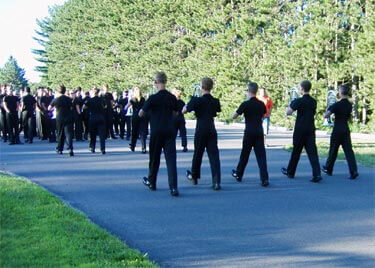 This is an image of, left to right respectively: Greg Parlee (trumpet), Josh Smeltzer (mellophone), Kyle Thompson (trumpet), myself (baritone) and Josh Kubo (euphonium). We all marched together in the 2005 Oregon Crusaders and this picture was taken during our visual warm-up before the Chippewa Falls, Wis. show. The picture was taken by our horn captain, Stephanie Reger (mellophone). Before almost every show during visual warm-up, one of our visual caption heads would choose a group of five people to retreat to the back of our block when we were doing line-by-line marching. This group was meant to be an exemplary performance for the rest of the corps and often used to display the talent or progress of specific members of the corps visually. This particular "back line" was chosen by visual caption head Nick Benson. Nick, along with my other caption head Dylan Thompson were possibly the two people who have had the greatest influence on me and the entire corps throughout the summer. They didn't simply teach us how to march; they taught us how to become good corps members and good people. This coming summer, some members of this back line will be moving on, with Kyle, Kubo and Reger joining the Blue Devils. Both caption heads and the rest of the back line will be returning. We look forward to another difficult, yet wonderfully life-changing summer this coming season. Thanks Cooper!