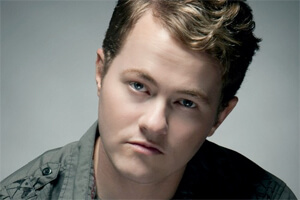 Shaun Canon
International singer, songwriter Shaun Canon, the creator of Live for Music recently wrapped shooting his latest music video which he hopes will strike a chord with kids across the country and inspire them to pick up an instrument. Canon, who has long been a big advocate for music education and himself a former member of the marching band at his school, knew the direction his "Live for Music" video should take after meeting with Drum Corps International. "I wanted to create a music video that would motivate students to join their school band, orchestra, marching band or local drum corps. I wanted the music video to highlight the benefits of playing an instrument," Canon said. The "Live for Music" video slated for release on YouTube Saturday, May 19, features high school students, drum corps performers and footage from the DCI World Championships. To musically energize the video from start to finish Canon called upon longtime friend, YouTube sensation from "America's Got Talent," Lindsey Sterling. Sprinkled in throughout the music video are other YouTube standouts including Danielle Lowe and Brianna Barnhart, who joined forces with Canon to musically represent and support music education. Respected director Dane Larsen was contacted and after hearing Canon's song, "Live for Music," was sold on the project. Larson says, "I had a clear vision of where the video should go. "Live for Music" is a song that's relevant to everyone because we all love music which lifts us up when we're down and celebrates love and passion for life. All that needed to be done through the camera lens was to show real life moments of people living for music and genuinely enjoying the music. Throughout the video we show Shaun's fans singing and dancing. As it moves along more and more people are showcased. It was a simple way of illustrating how Live for Music is spreading." After learning about Drum Corps International Canon had no doubt that this organization and its participants needed to be highlighted in the music video. "It's great to be a part of such a fantastic organization like Drum Corps International. I've been working with them for the past few months and have been highly impressed by the young students and their dedication. Drum Corps International is doing amazing things for young musicians around the country. I am thrilled to support such an organization," Canon said. "Drum Corps International couldn't be happier to be working with Shaun Canon. He has the ability to reach those involved in the marching music world as well as attract new interest and new people," said DCI Director of Business Development John DeNovi. "We appreciate the video paying tribute to anyone who is or has been in the marching music world. With Shaun's passion and vision for this project we are excited about the doors he can open for both students and teachers." With the help of NAMM, the NAMM Foundation and its SupportMusic.com music education advocacy efforts, School Jam USA, Drum Corps International and the popularity of YouTube, the goal is to reach the members of the 22,000 marching bands nationwide and the approximately 8 million individuals involved with various music programs coast to coast. Larsen feels the video will be a big success. "Shaun is truly passionate about the song and the music. He lives and breathes it. You can see and feel it when he sings to kids in the classroom. His charisma is contagious; people are drawn to him and his voice. He's like the nice guy next door who happens to kick it as a singer. It's an unexpected surprise when he sings to someone for the first time. They're instantly a fan of both him and his music. That's what happened to me," Larsen said. "I hope to inspire kids who might be sitting on the fence about joining band to do exactly that," Canon said when asked why he put so much time and effort into the "Live for Music" video. "I want all band kids around the country to feel a sense of pride when they watch this video. I hope all who aren't in band gain a greater appreciation for those who are. It's cool to be in a drum corps! It's fun and exciting to be a part of something so competitive." On May 19 students of all ages, teachers and the general public can go to YouTube.com/liveformusictv and decide if Canon will accomplish his goals with his latest video, "Live for Music." Learn more about Shaun Canon at ShaunCanon.com. Learn more about Canon's Live for Music Tour.