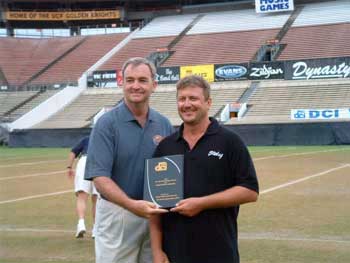 DCI executive director Dan Acheson (left) and Pat Seidling.
Pat Seidling of the Phantom Regiment was named the Division I Corps Director of the Year on the Saturday of finals week in Orlando. "This is very humbling," Seidling said. "I'm not so sure I deserve it. I'm honored, no question about it," Seidling said. "My father was a corps director. This one's for him," a moved Seidling said. Earlier this summer, we ran this lighthearted interview with him that appeared in DCI Today. Name: Pat Seidling
Age: 39 (ugh)
Family: Lovely and patient wife Attica, two nutty dogs Buster and Jake.
Education: Education degree from Louisiana State University
Current occupation: Director of the Phantom Regiment
Drum corps background: marched Wisconsin Sundowners 1973-1981, Pioneer 1982, Madison Scouts 1983, 1984. Have taught and managed corps in Louisiana, Wisconsin, Kentucky and Illinois, including a five-year stint as assistant director of Madison Scouts and director of Southwind.
Favorite recent film: "We Were Soldiers"
Favorite actor or actress:Dustin Hoffman
Favorite pig-out food: Chips and salsa
The last good book I read: "April 1865," about the last month of the Civil War. VERY cool!
Two CDs I'd have if I were stranded on a desert island: Anything by Lyle Lovett or Trisha Yearwood
Most prized possession: Aside from my health and my family, my collection of gifts and artifacts from all the international students that have stayed at my home.
Favorite non-drum corps activity: Reading, traveling and hanging with my dogs.
If I weren't a corps director, I'd be: Hmm ... tough one. I intended to do this since high school. I guess either traveling with a country band or running a shelter for homeless pets.
Best advice I've ever been given: I taught school for a few years, and left one school for another. The principal at the new school said "I'll judge you on the work you do here." That made an impression -- as life goes on and people come and go -- to judge people on how we treat each other. And hey, life is built on second chances, right?
The thing I like most about my job: Great friendships, travel and the daily freedom of the job.
The thing I like least about my job:E-mail.
Two people I admire the most: My father, and all my fellow corps directors.
I'd give anything to meet: Johhny Cash
Favorite drum corps show ever: A tie (why not?) -- Blue Devils 1976, Phantom Regiment 1989
Best drum corps anecdote: Way too many -- but I'll start with a story of a very bizarre trip on the Madison Scouts staff bus going from Moab, Utah, to Reno, Nev., in the summer of 1998. It's too weird to put into print, but I CAN say it involves a crazy driver and two hitchhikers. We'll leave it at that for now.
Favorite drum corps memory: Here too, WAY too many -- the excitement of seeing the "big" corps at my first DCI show in 1975, the great bus rides over the years, hanging with the members after rehearsals, nights on the staff bus "bonding" with crazy, creative and good people, late night beers at the food truck with the drivers and cooks, watching the Phantom Regiment walk onto the field. Just too many good times and laughs to single out.
A Phantom Regiment motivational speech in 15 words or less: 15 words? Oh man, I'm just warming up at 15! But this is a worthy challenge. Here goes: "Cherish your moments in Regiment, they will impact your life deeper than you'll ever imagine."