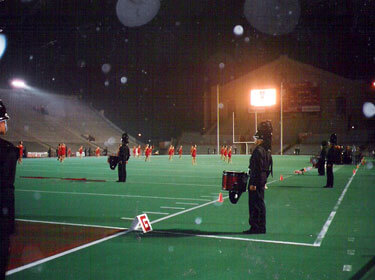 My name is Kevin Boyce. I was a marching member of Magic of Orlando in 1996 and 1998. I am currently in the "Commandant's Own", U.S. Marine Drum and Bugle Corps. This is my last year in the Marine D&B Corps before I move on to become an officer in the Marines.

I actually remembered the recent Fanfare article about Phantom Regiment playing in the rain in 1996. It was the first time I had seen them and the Cavaliers live. It was amazing to me. My first year in drum corps, and the only corps I have ever actually seen perform was myself marching in Magic! That night was something else and as I was watching Phantom, I took this picture where I was standing. I guess being a marching member in a DCI corps has its privileges. I love this picture.