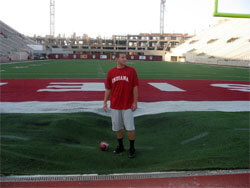 HeraldTimesOnline.com
Bloomington, Ind.'s Herald Times today reported that storms and flooding that pummeled Indianapolis and surrounding cities on Wednesday, were the cause of a sinkhole in the south end zone of Indiana University's Memorial Stadium underneath the artificial turf playing surface. Memorial Stadium in Bloomington is scheduled to be the location of the 2008 DCI World Championships from Aug. 7-9. The Associated Press reported in an interview with Indiana athletic director Rick Greenspan that the stadium's playing surface is affected from the south end zone to the 30- or 40-yard line, and that the university is still uncertain how much it will cost to fix. "We were in contact with stadium officials today and received assurances that repair efforts are already being put into action," said Dan Acheson, DCI executive director and CEO. "No matter how solid your planning is, there are certain events that cannot be foreseen, and this is one of them. As something we hadn't considered as part of our planning process, we're confident that this will turn out to be nothing more than a minor inconvenience and will not delay our ability to prepare for this year's World Championships. We'll know more as soon as the stadium has additional information for us late next week."