By Allison Owen We had been running on no sleep, which made missing our 7:50 a.m. flight that much worse. It was the morning after finals, when our long summer had reached its bittersweet end.

Mr. Dye, Jonathan, Holly and Jessica had come all the way from home to Foxboro just so they could see us compete during finals week. Since Southwind didn't make finals, I got to spend even more time with them just being "normal."   However, Crown obviously made finals, so we got to cheer our recently graduated classmates on. I had watched their show all summer, so it was amazing to see how the show had progressed since the early weeks of tour. Following the only retreat of the summer, the typical mass chaos consumed the Gillette Stadium parking lot as everyone prepared for their goodbyes. I had already checked all my stuff out the night before, so the rest of us just waited on Taylor, Devin, Sean and Tom. Tom is a Madison Scouts guard member from our area. 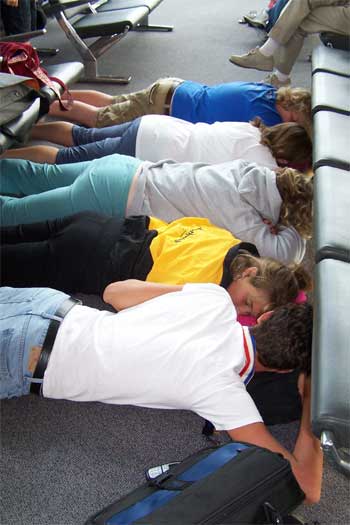 Allison and company, asleep at Logan Airport.
After our last goodbyes with those we held dearest, we were done. The summer of 2005 was officially over. Two down, five more to go.

No eating establishments were open in the early hours of this particular Sunday morning, but Taylor, Tom and I were definitely starving. I think that after three months of a regimented schedule we were used to eating after a certain amount of time. That designated time had long passed us by, so our bodies definitely wanted some nourishment. We were finally able to locate a Dunkin Donuts with its lights on. Several other corps members had found it before us, so we saw other people whom we had just said goodbye to at Gillette Stadium. Before we knew it corps jackets and medals filled the small shop. We each got some form of coffee. It wasn't until an hour or so later that we would realize that this was not the most intelligent idea when we were already limited on sleep. At the time, the coffee went well with the massive amount of doughnuts the small woman with the penciled-on eyebrows behind the counter gave us. Unfortunately it wasn't until later when we tried to eat the doughnuts that we would realize that she was just trying to get rid of the stale ones so she could make put a fresh batch in the window. The caffeine started to kick in by the time we got to the hotel. We attempted to eat the doughnuts as we talked and realized how exhausted our bodies were. Much to our misfortune, we were wide awake at the same time. I also had the bizarre realization that I had to be at school in a little ore than 24 hours. Mr. Dye and Tom actually slept in their room. Jonathan, Holly, Jessica, Taylor and I just sat around and talked for a couple hours. We had passed the sensible point in time and we were to the point when everything was absolutely hilarious, so we were just sitting around laughing aimlessly at anything and everything. Eventually -- and all too soon -- we had to leave for the airport. It was still dark out at 5:30 a.m., and I realized how unbelievably exhausted I actually was. We couldn't find the rental car place anywhere, so we drove around for more than an hour to try to find it. Finally we saw it and then had to rush to the airport. By the time we ran to the check-in counter they had already closed our gate. We had missed our flight. Actually, Tom was on time for his 9 a.m. flight, because he had booked his separate from ours. At least it worked out for one of us. Luckily we were rescheduled free of charge and had a decent amount of time before we had to board our new plane. This was the perfect opportunity for me to sleep! Mr. Dye, Jonathan, Holly and Jessica went off in search of food -- still feeling slightly empty after the doughnut disaster -- while I set my pillow down and crashed. I didn't care how many people had walked on the carpet of Boston Logan International at that point; I was so tired I barely even noticed. Soon Taylor joined me, and eventually Jonathan, Holly and Jessica did as well. I ended up getting about 30 or so minutes of sleep before we had to go sit on the plane and wait to leave for Charlotte. This made us late to our connecting flight and thus we missed two flights in one day, but that's another story in itself.

Apparently random people took quite an interest in five teenagers sleeping on the floor of a busy airport. I personally don't see what the big deal is, but I was really tired at the time. I do remember wishing I had a blanket in the air-conditioned terminal. My body was not used to such luxuries since I had spent all day everyday out in the summer heat. The shade of my skin was definitely living proof to having rehearsed outside for so long. When Taylor or I were near Jonathan, Holly or Jessica, it was obvious who had marched corps.

All in all, our little stay at the Boston airport was a good wrap-up to my three months away from home. I got to spend a little more time with some friends from school before heading back to the reality of the "real world" the next day.   Ultimately I didn't mind the lack of sleep and it was nice to take a little nap with some great friends. Allison Owen, 16, is a junior at Sullivan Central HS in Blountville, Tenn. She's in assistant conductor for Southwind and enjoys dancing, writing, English, guard, photography, having fun and performing. For college she would love to attend the University of Oklahoma and major in journalism or English; however, she'll probably end up at the University of Memphis for in-state tuition's sake.