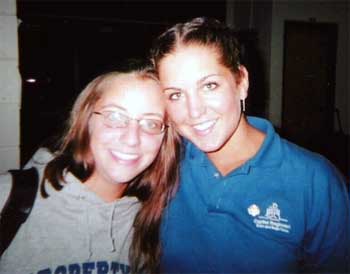 Alessandra Souers of the Capital Regiment sent in this one.
"I'm the mellophone section leader at Capital Regiment this year. I met Shannon Franks (left), a guard member, last year and we became best friends immediately. We always slept next to each other at housing sites, and this was usually the only time we got to talk since she was in the guard and I was in the horn line. "We definitely helped each other get through the summer! This picture was taken after Finals in Orlando last year, right before Shannon was leaving for the airport. Thankfully, we've been able to see each other a few times since drum corps, since we both live near Indianapolis. I'm going to miss her this year!" Thanks Allesandra!
E-mail your Forzato submissions -- and we will get to them all, in time (and we're posting them in the order they were received) -- to content@dci.org along with where and when the photo was taken. Send some biographical information about yourself as well. We'll give you full credit. Also, let us know if you want your e-mail address included, to get feedback from other drum corps fans.