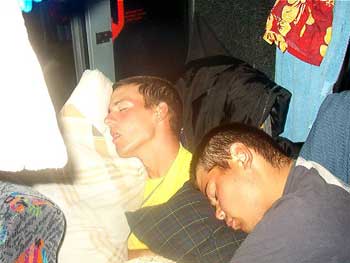 Matt Detch, who marched Contra with the Bluecoats during the 2004 season, sent in this one.

"This is a picture I took of Scott Patterson (left) and Chris Kucharski (right), who were also members of the Bluecoats contra Line. I took the picture sometime in July when the bus was stopped at a rest stop in God-knows-where. Chris and Scott didn't always get along, but you can see that by the time they had to get back on the bus they resolved their differences -- until the next day.

"They're both awesome guys and they made my summer a great one. Go Blue!"

Thanks Matt!
E-mail your Forzato submissions -- and we will get to them all, in time (and we're posting them in the order they were received) -- to dave@dci.org along with where and when the photo was taken. Send some biographical information about yourself as well. We'll give you full credit. Also, let us know if you want your e-mail address included.