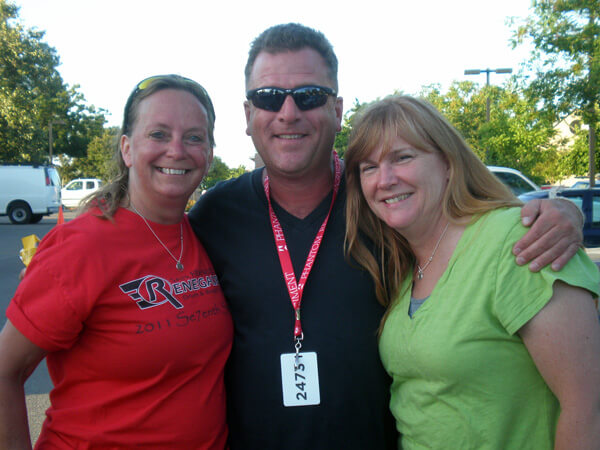 This photo features Madge S., KC M., and Lee S.. KC and Madge went to Fairview High School together in the early '80s in Boulder, Colo. Almost 25 years after they last saw each other, they met up at the Moonlight Classic Show in Stockton, Calif., on June 26, 2011.

Lee and Madge are members of the San Francisco Renegades, and KC is the visual coordinator for Phantom Regiment. KC was first introduced to drum corps when the Blue Devils stayed at his junior high school in 1977 (the same year Madge's husband, Ray, was practicing with the Anaheim Kingsmen on the very field that Madge and KC would later march on with their high school band!). Lee was a member of the BD rifle line at the time.

KC's mom was so impressed with what the activity was doing for young adults and how it inspired her son to pursue music and marching that she wrote a letter thanking the Blue Devils for their contributions to the activity. Lee's mom, in return, sent a thank-you note back. It doesn't get much more "small-world" than that!