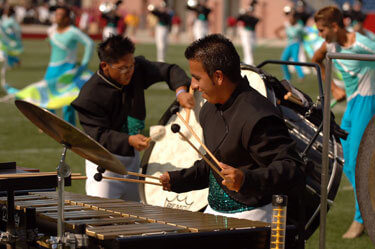 Bakersfield, Calif. plays host to the Bakersfield Sounds of Summer DCI event. Experience the beautiful outdoor sites of this city situated at the southern end of California's San Joaquin Valley as you make your way to the Ridgeview High school stadium for the show.

Corps at the Crest
Walnut, Calif.
Saturday, June 24
5 p.m. Walnut, Calif., home of the Corps at the Crest event, is a suburb of Los Angeles that holds a rural charm with close access to the big city. The show is held at the Hilmer Lodge Stadium at Mt. San Antonio College, a respected venue to host the best West Coast corps in DCI.