Name, hometown: Patty Casey, Fitchburg, Mass. Which corps do you volunteer with, how did you get started and how long have you been at it? I volunteer for the Spartans. After the Fitchburg Kingsmen folded, my daughter still wanted to participate in a drum corps, so we headed over the state border to Nashua, N.H. in the fall of 1999, and I have been there ever since. My older daughter aged out from drum corps in 2004, and I still have a 17-year-old daughter playing soprano with Spartans. What kind of work do you do with the corps? I run the food truck support staff and also do all of the shopping to keep the members well fed. I stay with the corps every weekend to chaperone and to cook. I am also the horn line bus mom, and I will do most anything that is asked. During the fall months, others and I recruit members for the corps at band shows throughout New England. 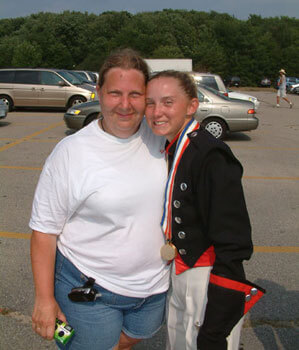 Patty Casey with daughter Colleen right after the 2005 Division II & III Championships in Brockton, Mass.
What is your favorite part of being a volunteer? I enjoy the kids. I enjoy seeing them work hard and being part of a larger team to help them succeed. What is the most difficult part of being a volunteer? Being tired after spending three-and-a-half weeks on the road. Do you have any favorite memories or anecdotes from your years as a volunteer? I have many memories from my years as a volunteer. I can remember when the refrigerator tipped over inside of the food truck taking most of the cabinets with it and losing all of the food in it in 2002. Later that day the corps had a police escort to deliver enough Dominos Pizza to feed everybody at the show site in Pennsylvania. Also, often times to take the edge off of things, the food staff has theme nights. The members never know if they will walk up and see us all wearing Hawaiian costumes or other things. What are you most looking forward to during the 2006 season? Working with the new parents and keeping the members healthy so they can enjoy the season and hopefully bringing another gold medal home to Nashua. What advice do you have for those who would like to get involved as a volunteer with a corps? Find a corps with the right mix of people, because the people make all of the difference. Remember that it is all about the kids. Add anything else you'd like. I was a member of the Leominster Joanettes from 1963-1975 and with the Senior Fitchburg Kingsmen from 1988-1990. I also was the manager of the Fitchburg Junior Kingsmen from 1992-1999. So as you can see, my life has been filled with drum corps.