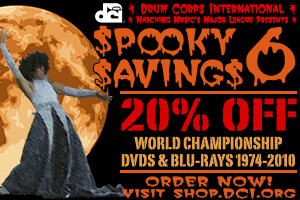 Pumpkins aglow, and a sale that sizzles!

These deals are frightfully good, but will only be available through All Hallows Eve, Wednesday, Oct. 31. Order today ... if you dare!

Offers cannot be combined with other promotions or discounts. Promotion expires Thursday, Nov. 1, 2012 at 12 a.m. (ET) and excludes all 2011 and 2012 video products and Essentials Collection Blu-ray. Offers not valid on prior purchases. Drum Corps International reserves the right to modify or cancel promotion at any time.