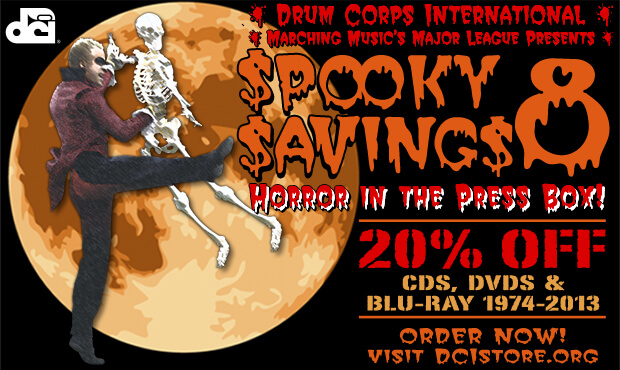 Double, double, flams and diddles; Pumpkins aglow, and a sale that sizzles!

This season's sale offers you 20 percent off World Championship CD, DVD and Blu-ray sets spanning 1974 to 2013, including all three volumes of the brand-new and ultra-popular Essentials Collection!

Take a peek at just a few of the spooky deals to be had at DCIstore.org …


These deals are frightfully good, but will only be available through All Hallows Eve, Friday, Oct. 31. Order today ... if you dare!

Offers cannot be combined with other promotions or discounts. Promotion is valid through Friday, Oct. 31, 2014 and excludes all 2014 World Championship audio and video pre-orders. Offers not valid on prior purchases. Drum Corps International reserves the right to modify or cancel promotion at any time.