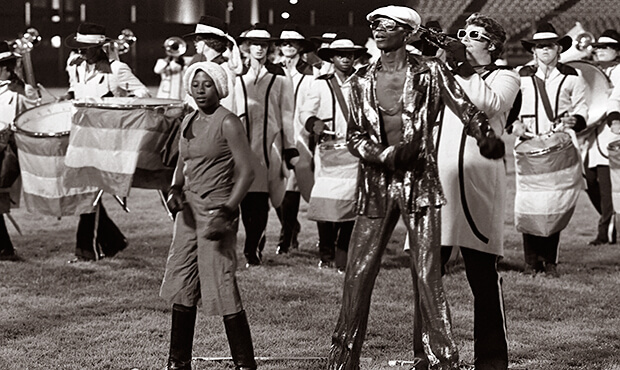 1977 Bridgemen
In 1977, the DCI World Championship Prelims competition was held at the University of Colorado's Folsom Field in Boulder, with the Finals held at the now demolished Mile High Stadium in Denver. Blue Devils won the title for the second time with almost perfect General Effect marks, and the Crossmen made the Finals for the first time. Due to a tie for 12th in Prelims between the Garfield Cadets and Kilties, 13 corps went on to the Finals. Originally the Bridgemen were not going to be allowed to perform at all due to a controversy involving an interpretation of the overage member clause in the DCI rulebook, however, the corps performed even though disqualified from the competition. Prior to the first note of music played by the '77 Bridgemen, members of the brass section opened up their yellow uniform coats to spell out "WELCOME BACK, MY FRIENDS, TO THE SHOW THAT NEVER ENDS," lifted from the opening lyrics of Emerson Lake & Palmer's "First Impression, Part II." The official opening of the show began with the percussion performing the Chiquita Banana jingle. This was a humorous self-referential statement to the corps' long yellow jackets—introduced in 1976—causing the corps to be referred to as "The Bridgemen Bananas." The song was a jingle written by Len MacKenzie and Garth Montgomery in 1944 while they worked for the ad agency for what was later renamed Chiquita Brands. The jingle was conceived to help Americans learn how to ripen and eat bananas, which at the time were still considered a novelty from South America. The second part of the percussion introduction was "We Have No Bananas," written by Frank Silver and Irving Conn for the 1922 Broadway revue, "Make It Snappy." During both of these banana songs, the arms of the brass players were knocking at an ever-advancing door. It was a motion drum corps audiences had never seen before and there was no plausible explanation for it, other than it was a Bridgeman thing to do. Opera composer Ruggero Leoncavallo wrote "Pagliacci" in 1892. The corps next played the Maynard Ferguson arrangement of the segment "Vesti la giubba," which translates to "put on the costume," referring to the opera's lead character, a clown. To that end, the Bridgemen drum major sat at a makeup table at the front of the field, put on a clown costume behind a screen, and applied clown make-up. The screen then dropped to the ground and the drum major, now in clown attire—complete with big red nose—directed the corps while facing the audience. Chuck Mangione's "Land of Make Believe" came next and was from the 1973 album of the same name that also brought us the drum corps classics "Legend of the One-Eyed Sailor" and "El Gato Triste." Bridgemen formed eight small circles around one big circle of drums, a drill idea that flew in the face of traditional standstill formations of arcs facing the stands. The addition of two dancers up front during this segment was also atypical of the time period. Next was "A Salute to Abe Beame and the Big Apple," referencing the then-current mayor of New York City. A noisy traffic jam—with horns blaring like car horns—featured corps members exasperating a traffic cop holding a stop sign. After he threw the sign on the ground in frustration, the cop handed a ticket to a not-so-happy drum major as the corps played a short fanfare of "New York, New York" from Leonard Bernstein's 1944 Broadway musical, "On the Town." Next was the theme to "42nd Street," a 1933 Warner Brothers film musical directed by the famed Busby Berkeley, with music by Harry Warren. After the brass players assembled a "NYC" formation, the percussion took over the theme. The next segment of the medley was a searing rendition of "Harlem Nocturne," written in 1939 by Earle Hagan and Dick Rogers. The final work in the medley was "Give My Regards to Broadway," written in 1904 by the famed George M. Cohen for his Broadway musical, "Little Johnny Jones." National Public Radio has deemed it among the 100 most important American musical works of the 20th Century. The musical, though now forgotten, also introduced "Yankee Doodle Dandy" to the world. The lengthy production ended with the color guard members on both sides of the 50-yard line opening up their coats to spell "New York," with an apple between the two words. 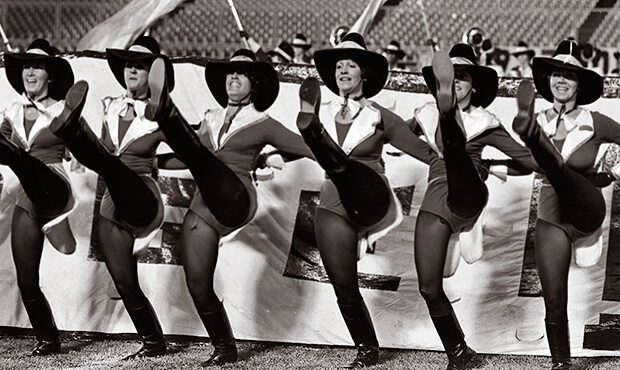 1977 Bridgemen
The Bridgemen closed out this production with selections from "A Chorus Line," the 1975 Broadway musical written by Marvin Hamlisch and Edward Kleban that was set on the bare stage of a theater during auditions of 17 dancers for a Broadway show. Opening with "What I Did for Love," the work segued into "One" as 17 dancers hid behind a large banner reading "Bridgemen." The members stripped down to theater leotards and unveiled themselves as the banner fell down, proceeding into a high-stepping kick line routine. With no apparent segue, the corps ripped into the famous theme from "William Tell Overture" by Gioachino Rossini, premiered in 1829 and the last of the composer's 39 operas. Many know this theme for its use in the opening of "The Lone Ranger" radio and television series. At the very end, the long banner went back up and the clown, traffic cop and two dancers from earlier came out from behind to make a curtain call. The final two notes of the show were a cheeky reference to the Garfield Cadets who caused their own controversy in 1977 by challenging the judging community by singing "Amen" at the end of their show—at a time when vocalizing wasn't exactly permitted in the rulebook. The Bridgemen delivered the notes with an astounding volume as the banner fell again and the chorus line dancers waved to the audience.

For this week only, you can save on the Legacy Collection DVD that contains this complete Bridgemen performance, along with all finalists from the 1977 DCI World Championships.