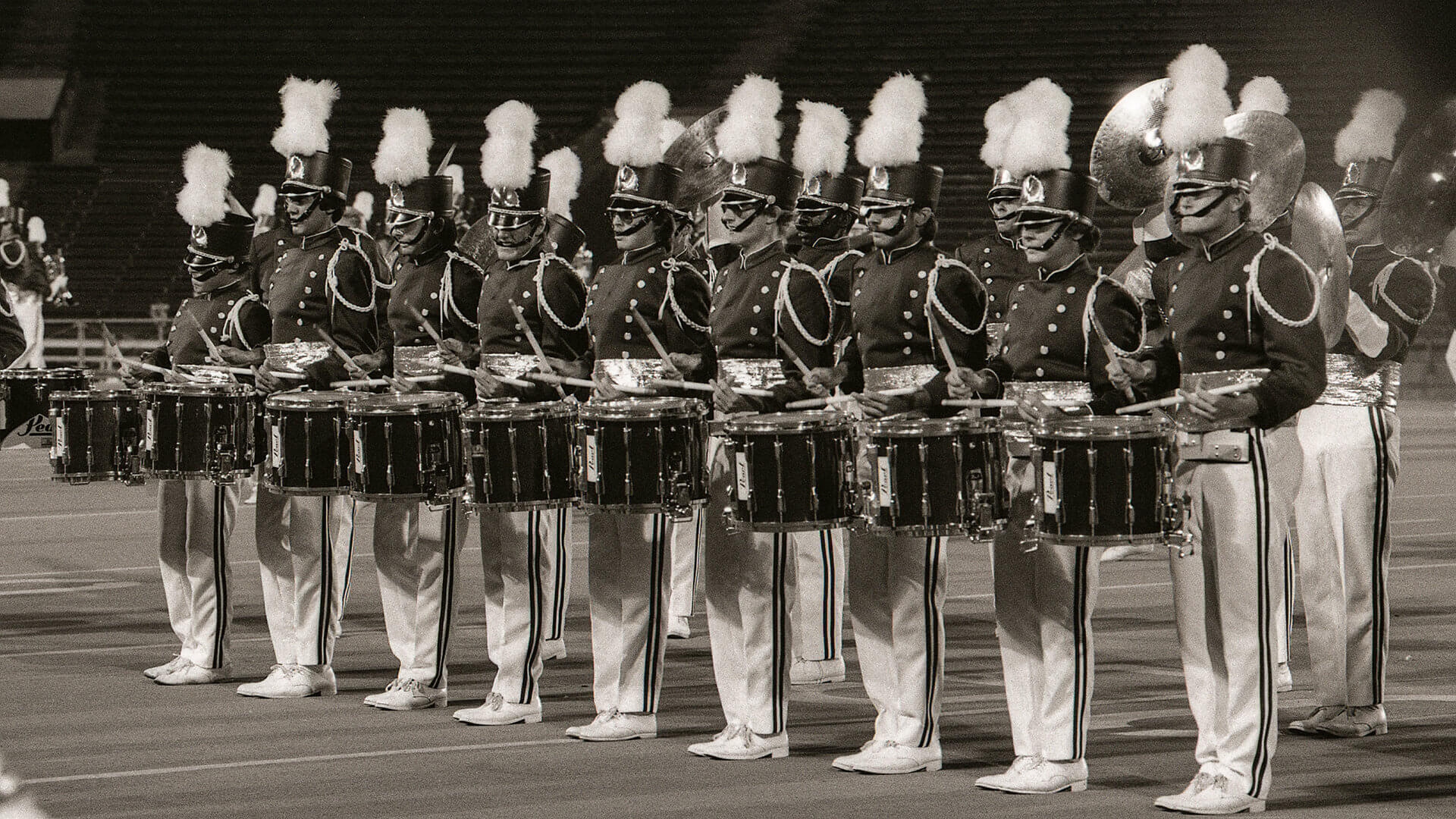 The 1986 Drum Corps International World Championships returned to the University of Wisconsin’s Camp Randall Stadium for the second of three straight years. Blue Devils almost went undefeated this season, were it not for a season-opening loss to Santa Clara Vanguard, the corps that finished in second place for the second of four years in a row.

The Cavaliers placed in the top three for the first time in DCI’s history, and the Garfield Cadets performed on national television during the 100th anniversary celebration of the Statue of Liberty. 1986 would also be the last time the Troopers earned a spot among the top-12 finalist corps for another 23 years.

Suncoast Sound’s “Adventures in Time” show was based on the Stan Kenton Orchestra’s 1962 suite of the same name which was composed by Johnny Richards. Better remembered for Kenton’s 1956 recording of “Cuban Fire Suite” and for writing Kenton’s 1962 Grammy-winning “West Side Story” album, Richards wrote the suite for a huge 14-piece brass section, including four mellophoniums.

Mellophoniums, which are essentially bell-front French Horns, were used by Kenton to bridge the range gap between trumpets and trombones. Though projecting better than French horns, they were notorious for being extremely difficult to play in tune. The instruments had a huge bell and a slow response, making them cantankerous creatures in the hands of all but the most dedicated brass players.

With this production, Suncoast Sound attained its highest placement and highest score ever. The horn line took third in Total Brass at the DCI World Championship Finals, earning a 9.9 for first place in Field Brass and a 9.6 for third in Ensemble Brass. The percussion section placed a strong fourth.

The show opened with the corps in a highly asymmetrical series of random-looking straight lines, starting with the brazen and brassy “Commencement,” the first piece of Richards’ concerto. Although the extended eight movements was a suite, Richards considered it to be a concerto, typically a work for orchestra and a featured solo instrument. It’s said he considered the entire jazz orchestra in “Adventures in Time” to be the featured soloist.

The show’s second movement was based on the 5/4 “Quintile,” originally a trombone feature. Although it was essentially a relaxing palette cleanser after the assertiveness of “Commencement,” there was a hint amidst its restraint that something might fall out of the sky at any given moment. The following extended percussion feature started with a series of brass stabs loosely based on the opening of “Aspect,” the final work in the concerto.

The percussion feature was titled, “Orion,” which is not a title among the eight movements of Richards’ original. Rather, the piece, co-written by Allan Murray (the corps’ battery percussion arranger), Kenny Brooks (the corps’ front ensemble percussion arranger), and Jed Davis (battery staff member), was based on a guitar riff from a cassette tape of “James Newton Howard and Friends,” released in 1983, in the infancy of his career as one of Hollywood’s top film composers. The feature deftly combined jazz with “old school” drumming. 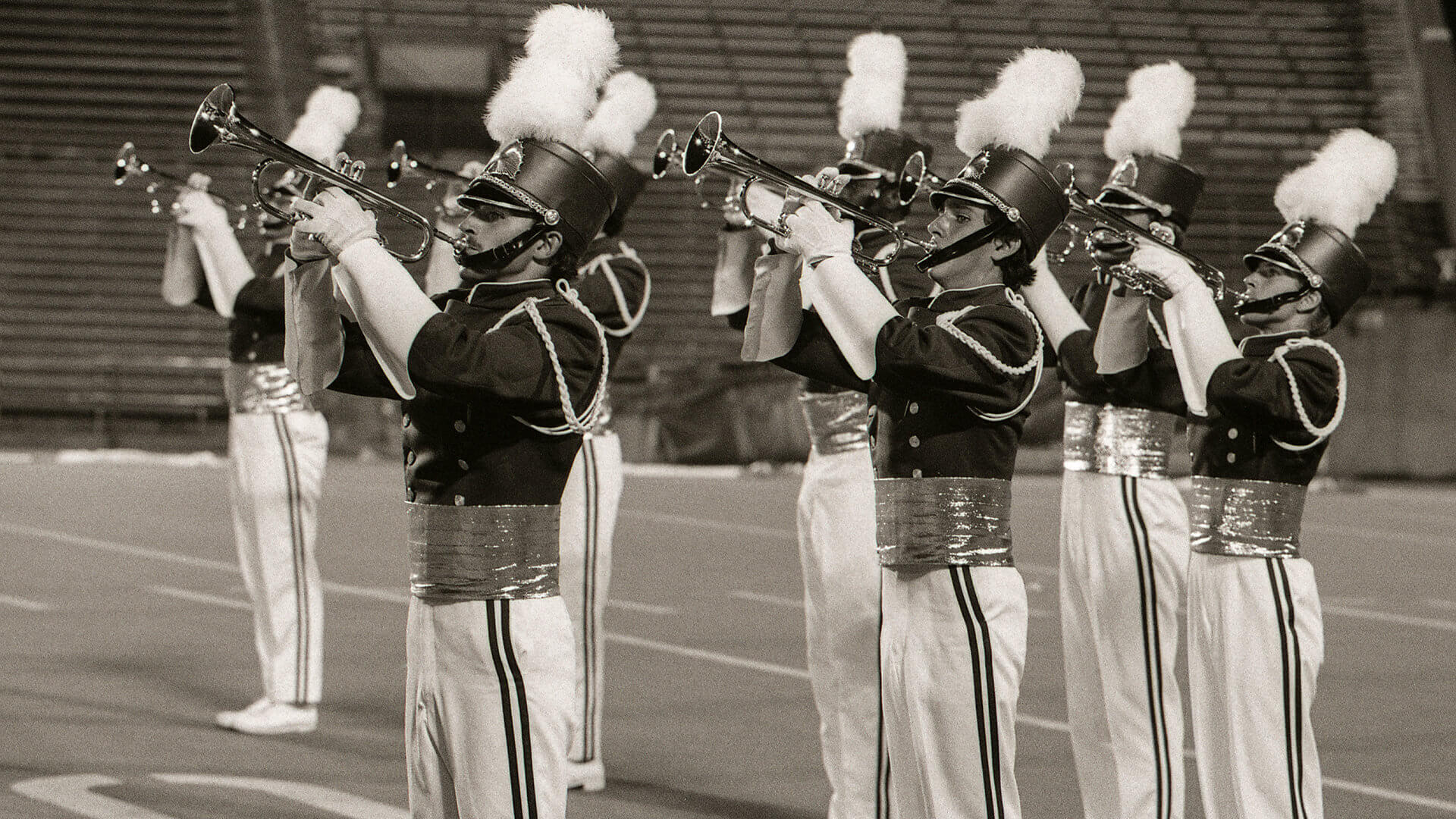 According to Murray, the final two dozen or so counts of the piece were written by members of the drum line, who worked up the riffs and then demonstrated what they came up with to the drum staff. Throughout the feature, the color guard members manipulated two-sided rectangular banners—each attached to two poles—so that the resulting triangular shapes continually changed color.

Following “Orion” was the mellow ballad, “Artemis and Apollo,” featuring a delicate mellophone duet. The ballad led into “3x3x2x2x2=72,” so named because it was written in 9/8 time signature, represented by 3x3=9, and 2x2x2=8. This movement ended with one of drum corps’ most memorable bass drum cadenzas, which was written by the performing corps members. The line was renown for its employment of hyper-challenging features based on rapid rolling that darted between the different drums. It was said at the time that Suncoast’s bass drum line played more rolls than some corps’ snare lines.

The show ended with “Aspect,” replicating the mellophoniums-to-trumpets trills from the original in cross-field trade-offs between the soprano bugles and mellophones. The original liner notes on the “Adventures in Time” album refer to “Huge blocks of sound [that] encompass the listener.” This was most true at this part of the show, when the horns demonstrated why they had on occasion bested every corps’ horn line that year and why they were worthy of the high scores they earned in the brass caption.

For this week only, you can save on the Legacy Collection DVD that contains this complete Suncoast Sound performance, along with all finalists from the 1986 DCI World Championships.