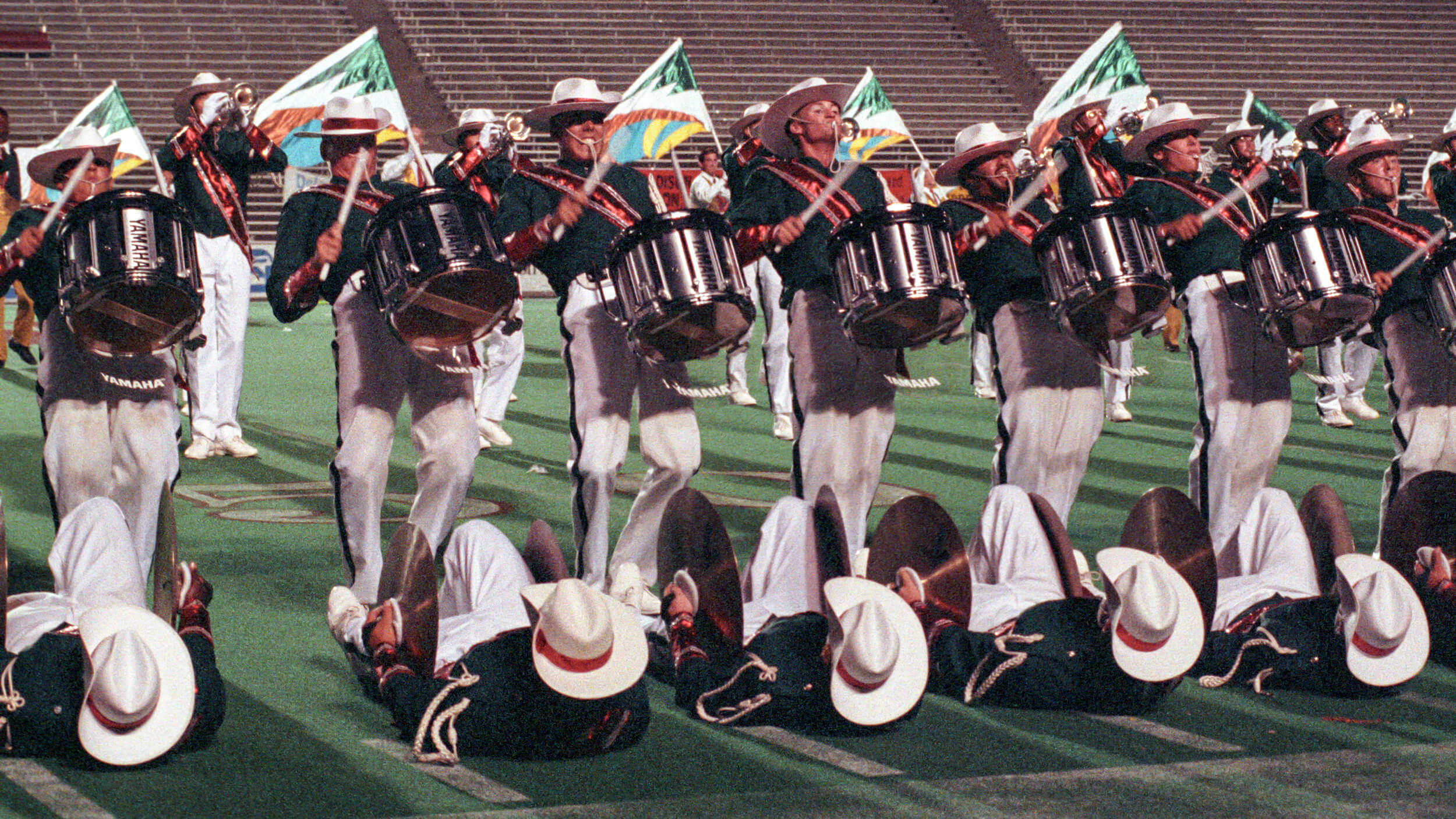 The World Championships featured a number of firsts: The Cavaliers won their first DCI title, Blue Devils featured its first coed color guard, Crossmen broke into the top-six, and nine corps achieved a score of 90 points or higher for the first time.

Cavaliers’ closing tune in 1992 commemorated a revolt in England that in 1819 was crushed on August 15, the same date as the DCI Finals, and the second-place Cadets of Bergen County experienced a late season surge after placing sixth just three weeks earlier. In Madison, Star of Indiana won Quarterfinals, then slipped to second in Semifinals before finishing the season in third, ending their patriotic show behind a massive scrim of exploding fireworks saved for the very end of the season. 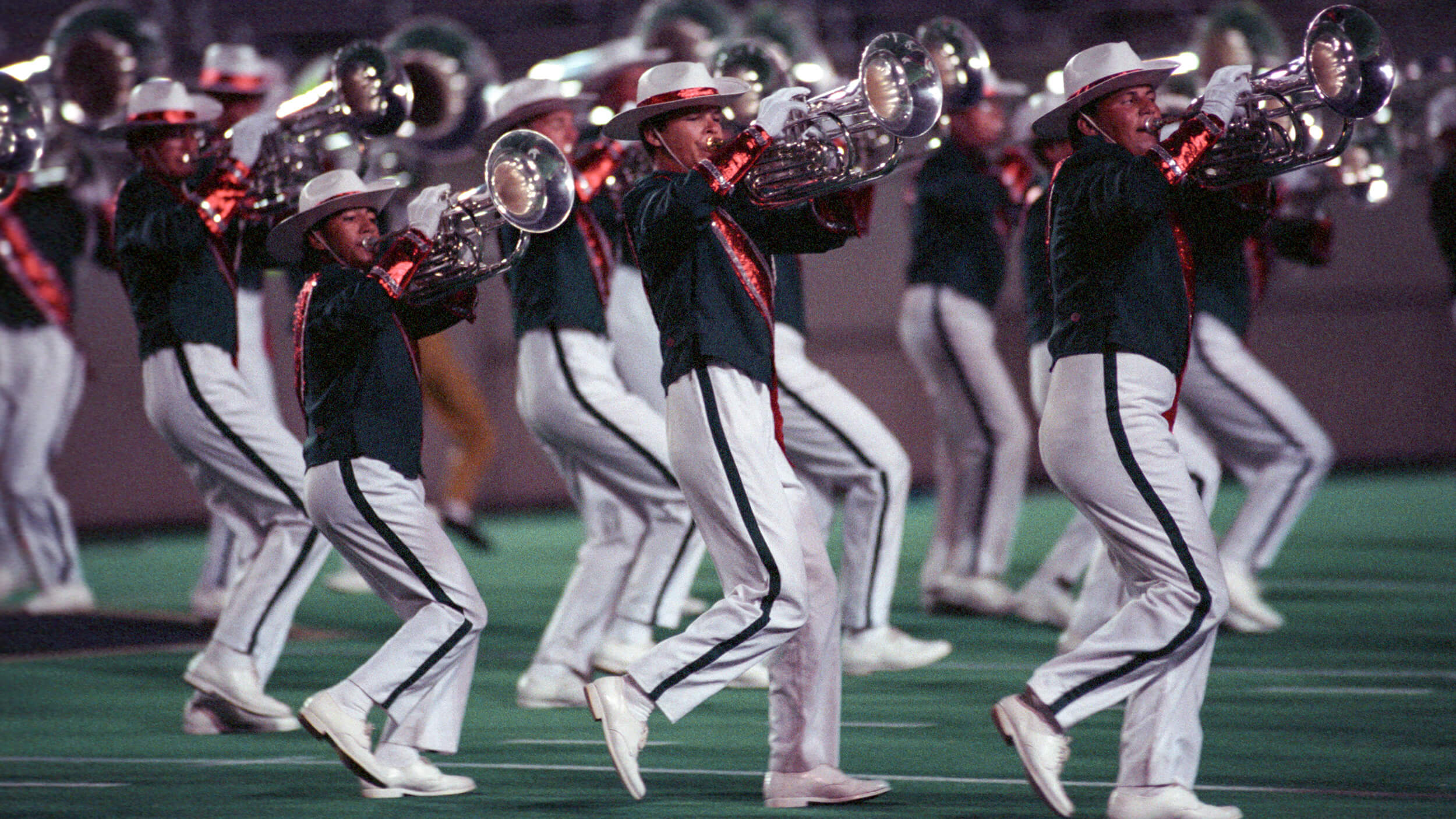 Madison Scouts’ fifth-place “City of Angels” production revisited the musical the corps first explored the prior year, with selections rearranged musically and in the order they were presented on the field. The musical is set in Hollywood in the years after World War II, featuring a full-color real-life comedy running simultaneously to a fictional black-and-white film noir detective drama.

With music composed by Cy Coleman, “City of Angels” in 1989 took Broadway by storm. Coleman wrote the music 39 years after his Broadway hit of “Wildcat,” the musical that provided Lucille Ball her first Broadway performances.

Color guard members tossed flags across the line of brass players as the wheel pivoted, with the drums extending out perpendicular to the horns. The move stimulated one of the loudest cheers of the season from fans. Drill forms throughout the selection often rapidly alternated between geometric and organic shapes.

A very brief rendition of “L.A. Blues” came from a wordless instrumental piece in the musical, playing off the melody from the opener, with a distinctive “wah-wah” effect delivered by the backfield-facing soprano bugles. This selection served mainly as a gateway into the spirited “Ya Gotta Look Out for Yourself,” new for 1992, replacing “I’m Nothing Without You” from the corps’ 1991 production.

This lively tune, that featured a block of horns high-stepping on a diagonal, allowed for the color guard performers, who utilized electric lime green-colored flags, to dance, spin, and somersault with abandon. The piece ended with the horns and drums in a straight line up against the front of the field, frozen in a variety of individual poses, each unique from everyone else.

The tender and emotional ballad of “With Every Breath I Take” almost imperceptibly alternated the single run-through of the melody between various sections of the horn line. Despite its brevity, it was arguably the soul of the show, providing an emotional pinnacle for the audience to reflect upon as the corps finished the tune facing backfield in a sideways yin and yang formation.

The ballad segued into a more intense rendition of “Funny” than that performed by the corps the year prior. A lengthy percussion interlude of almost a minute and-a-half in length, based on the melody and featuring blistering fast drum-to-drum work from the snares, led into a screaming horn line standstill and a finishing block of brass surrounded by blazing yellow and orange flags.