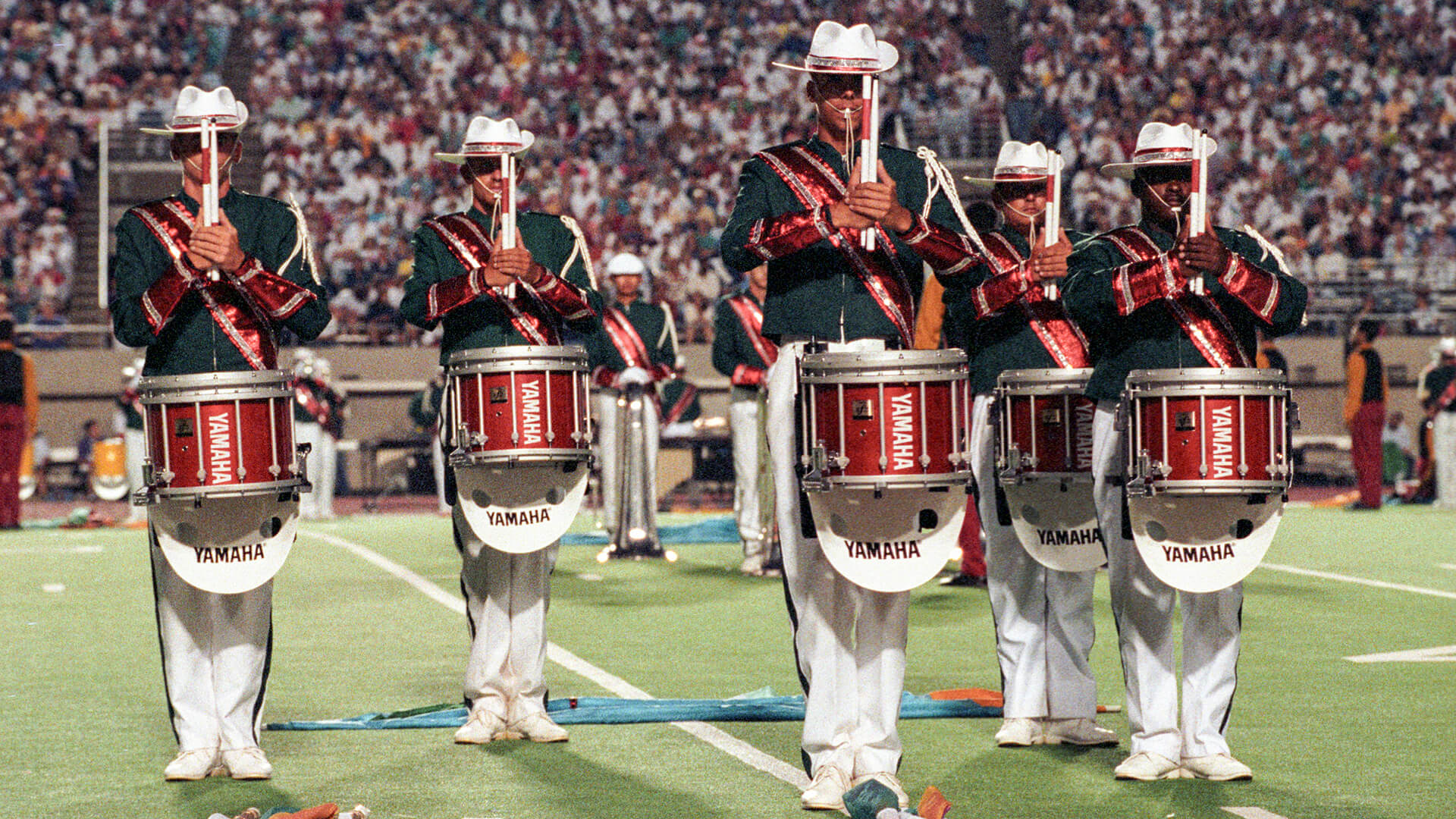 The Drum Corps International World Championships were held in a stifling hot and humid Jackson, Mississippi in 1993.

Cadets of Bergen County won its fifth DCI title 10 years after picking up its first, beating Star of Indiana by just a tenth of a point in the Finals competition. Overall that season, Star had won 30 of its 34 shows, losing each of those four times to The Cadets.

Both Glassmen and Colts made history as first-time finalists. The 12th place Colts knocked Velvet Knights into 13th place and out of the Finals competition after becoming the only Semifinalist corps to see its score increase from the Quarterfinals. 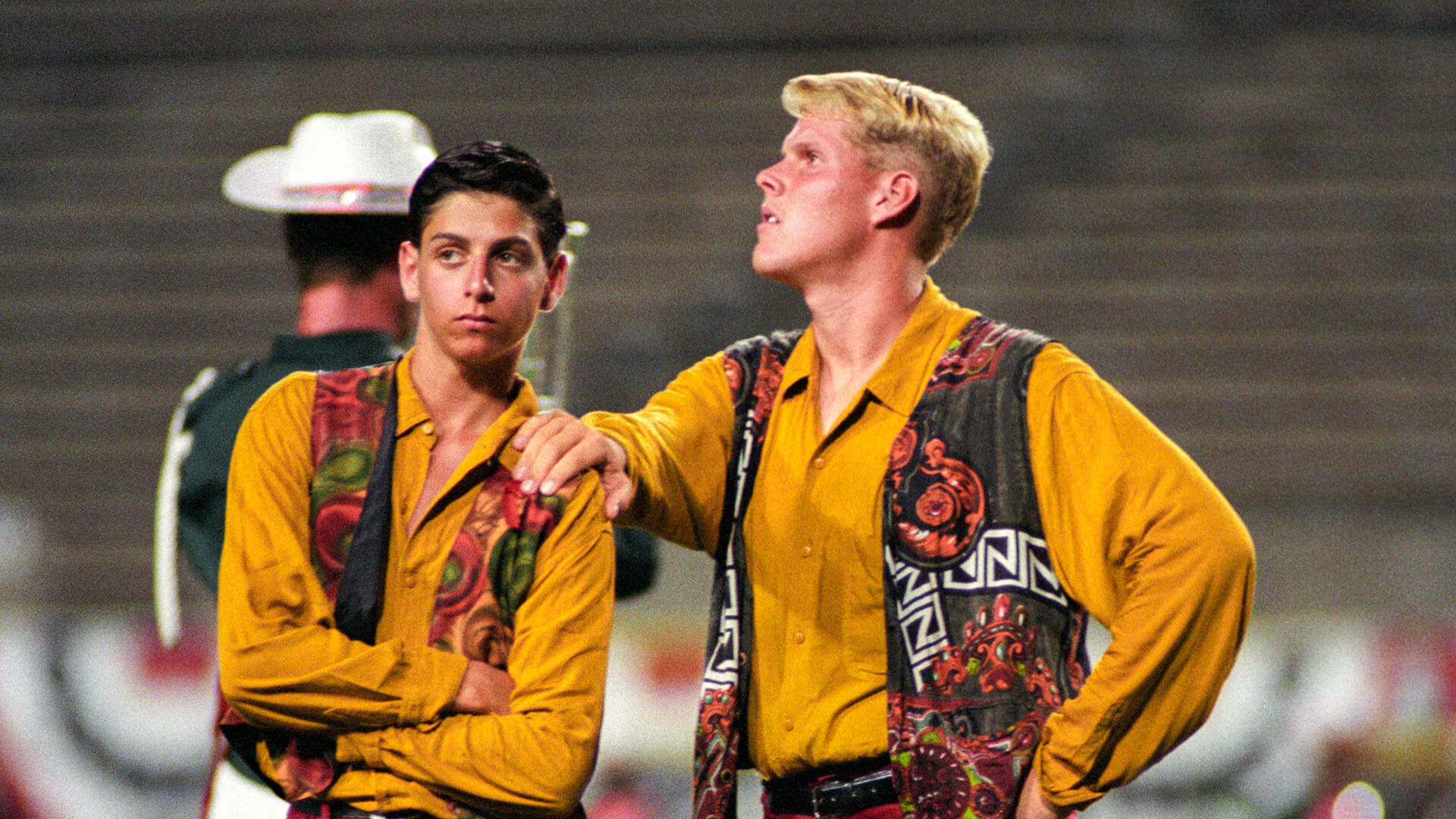 An intense rainstorm struck during the Finals performance of the Madison Scouts, playing havoc with the corps before abating and returning later in the closer.

The Wisconsin corps’ sixth-place production, “Reflection and Evolution,” incorporated two pieces the group had played in previous years, plus a new, original work that sounded as if the corps could have played it previously, contributing to both words in the title.

The show opened with “Numero Uno,” first played by the Scouts in 1981. The piece was the last track off the 1978 album, “Sunshine Rock,” recorded by Louis Bellson & The Explosion Orchestra. It was co-written by famed drummer and prolific recording artist Bellson and Jack Hayes, a noted arranger who worked on film scores.

Facing backfield in numerous pods of brass players and percussionists, the corps opened the show with a series of ethereal sounds just as rain began to fall.

After culminating with two block triangles of brass on opposite sides of the 50-yard line, the horn line formed one giant wedge after the players rapidly spun around to face the audience. A couple maneuvers of small squad rotations later and a giant rendition of the corps’ fleur-de-lis logo suddenly appeared on the football field.

By this point, the storm was so heavy; water could be seen splashing off the timpani heads. It had become difficult for the color guard members to spin their flags, which had become waterlogged. On the video of the corps’ Finals performance, close-ups of the contra bass players show rain beaded up on their instrument bells as the precipitation began to dissipate just as fast as it had struck. 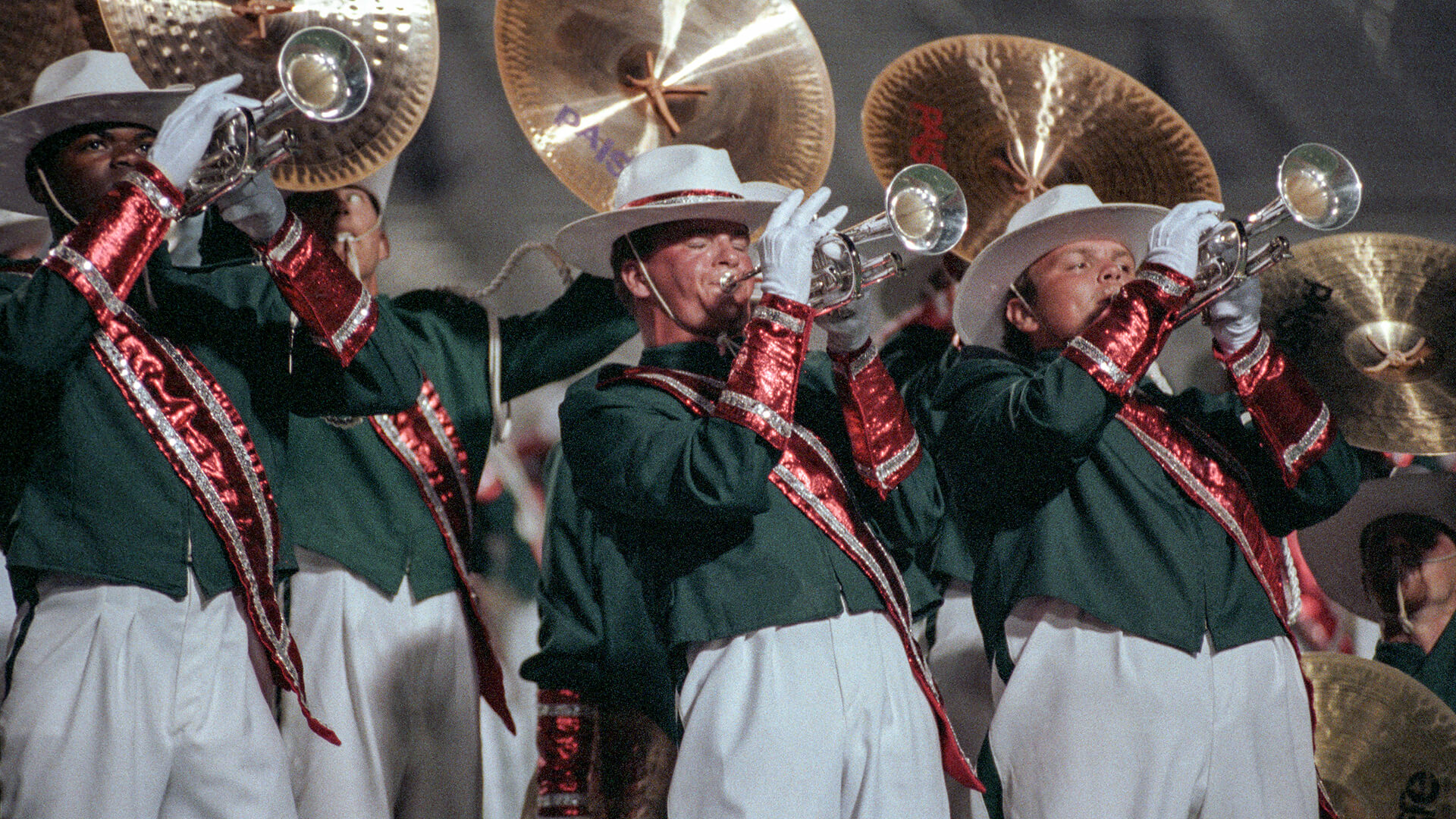 During this segment the corps coalesced into three tight block circles during the introduction, the solo melody punctuated by seemingly random bleats of various voices of horns. As the performers turned around to blow off the faces of anyone fortunate enough to be sitting in the front rows, large flags of black and white stripes and swatches of red, gold, and purple were introduced by the color guard members, two to each. As the flags were swept across the field, mists of water rose up from the preceding storm.

During a brief standstill segment, sections of horns within one large wedge pointed toward the press box as the different brass voices alternately took turns playing one-to-four notes. The horns not playing at the moment pointed their instruments to the ground to help emphasize how the musical passage was being transferred throughout the line.

The melody was accompanied by the timpanist playing the same notes, leading up to a drum feature at the front of the field, featuring snares, then tenors before the bass drums snuck up to the front to have their say.

After this, the snare drummers attached lower-pitched drums to their snares. The new drums, the same yellow as seen in the new flags, had been positioned on the front sideline up to this point. As the drum line backed up, the snare drummers performed a drum-to-drum routine, alternating between their new drum and the drum of the person next to them. The piece ended with high-note playing sopranos driving the soaked audience delirious.

The show’s closer, “Encore,” was co-written by Scott Boerma and Taras Nahirniak and originally titled “Fleur-de-lis.” Corps director Scott Stewart wanted a piece that had a sort of “Ice Castles” ballad feel, but was original. Both Boerma and Nahirniak were instructed to write their own offerings, leading Stewart to request that “Encore” utilize Boerma’s ballad and Nahirniak’s up-tempo section.

The rain returned during the Madison’s closing number, not nearly as intense as earlier. A continuous wave of brass players collapsed into a long diagonal line as pastel flags closed in from two arcs toward a line perpendicularly intersecting the horns. All brass then faced the back of the field as the horns pivoted into a company front formation. The show ended with the horns collapsing into a tight block diamond to play the final long chord of the show.