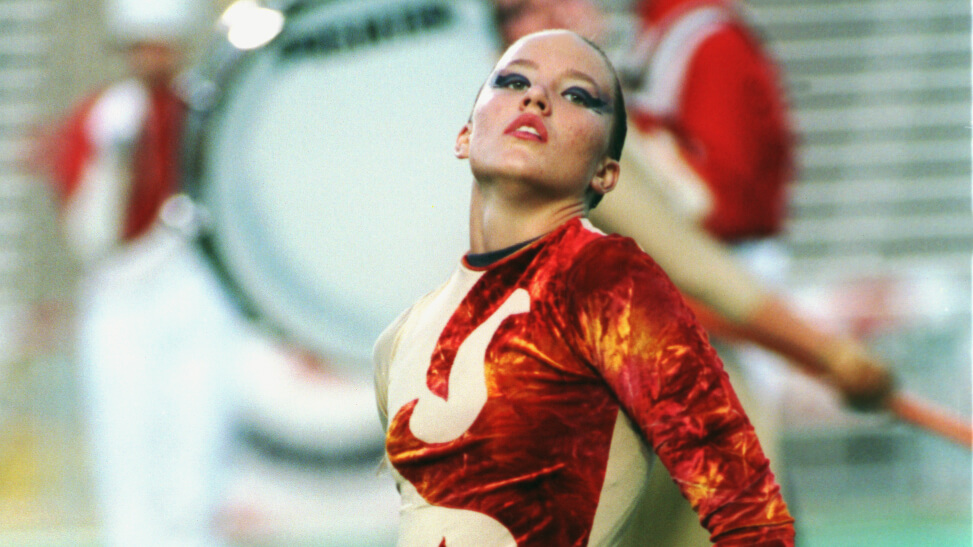 Blue Devils and Santa Clara Vanguard tied for the 1999 Drum Corps International World Championship title at the University of Wisconsin’s Camp Randall Stadium in Madison, the second tie for the top position in just four years.

It was Blue Devils’ 10th World Championship title and Vanguard’s sixth, and it was the sixth year in DCI history that the title was won with a score of 98.600.

A number of notable milestones occurred in 1999: Boston Crusaders became a World Class finalist for the first time ever. Cadets of Bergen County, formerly Garfield Cadets and prior to that the Holy Name Cadets, changed its name to The Cadets. Crossmen celebrated the corps’ 25th anniversary. The Cavaliers introduced its iconic “diamond cutter” drill maneuver, and it was the last year that DCI Hall of Fame member Jim Wren did the brass arrangements for Phantom Regiment. He was famed for having long established the corps’ deep and rich lower brass sound.

According to information supplied for the 1999 DCI program book, the show was going to be titled, “Selections from Voices from Francis Poulenc’s ‘Stabat Mater,’” but the 1950 work by the French composer didn’t make it into the show come summer.

However, the show remained based on vocal music, starting with Guiseppe Verdi’s “Dies Irae (Day of Wrath)” from the Italian composer’s “Requiem Mass,” composed in 1874 in memory of Italian poet/novelist Alessandro Manzoni. “Dies Irae” musically describes trumpets calling the recently deceased to God’s throne of judgment, where it would be determined who would be allowed into Heaven and who would be condemned to eternity in Hell.

The Verdi work was intensively fierce, appropriate for its deadly serious subject matter. Colts’ brass delivered a boisterous volume not always expected from the corps. This was a thoroughly unforgiving treatment of an equally unforgiving piece meant to make people shake in their boots; and recognizing that, the corps carried it out with a thoroughly dedicated aplomb.

Next came “Selections from ‘Flamma Flamma, Fire Requiem,’” a 14-piece musical drama written in 1993 by the contemporary Belgian operatic composer Nicholas Lens. The first part of an operatic trilogy named, “The Accacha Chronicles,” Time Magazine described the work as “breaking down the established divisions between popular and so-called serious music” with “its visceral strength and sustained emotional drive.”

The show’s third major segment came from the ballad “I Believe” by French rock musician Eric Lévi, written prior to the composer achieving a more extensive fame for penning music for French movies.

“I Believe” premiered on the 1997 album, “Era,” Lévi’s new-age project that became the best-selling exported French music album at the time. “Era” mixed electronica and pop with world music and ancient Gregorian chants. Live productions of the album often featured performers dressed in medieval garb. The song gained greater exposure to a wider public a decade after Colts’ performance when it was utilized in the movie, “The Chinese Botanist’s Daughters” and was recorded by Andrea Bocelli.

For this tender ballad, the Colts’ color guard performers removed their tan and maroon overlays to perform balletic dance moves in black leotards. This led into them spinning long flags of four wide vertical blocks of sequentially lighter blues.

The final segment of “Voices” featured the opening of “Part II – Scherzo/Giang Co (Tug of War)” from Elliot Goldenthal’s “Fire, Water, Paper: The Vietnam Oratorio,” a large-scale work composed in 1993 for the 20th Anniversary of the end of the Vietnam War. The American composer studied with Aaron Copland and John Corigliano and won an Academy Award for his score to the 2002 film, “Frida.”

Flags of diamond-shaped blocks of dark gray and white — with a subtle hint of a deep maroon that was more sensed than seen — expressed the serious nature of the piece, capping off a show that was relentless in its exploration of the more serious nature of vocal music.