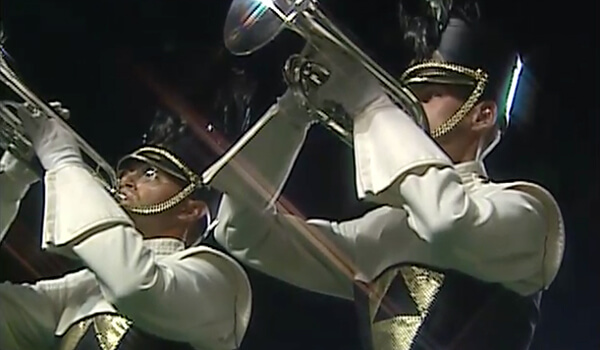 1999 Glassmen
For many, the 1999 Drum Corps International World Championships at the University of Wisconsin's Camp Randall Stadium in Madison is remembered for giving us the second tie for the title in just four seasons. Blue Devils and Santa Clara Vanguard both went home to California happy after each earned a score of 98.40. In 1998, Glassmen stunned a lot of corps by placing fifth, two seasons after missing the Finals competition by one placement. The corps' 1999 show, "Empire of Gold: The Music of Zolt?ˇn Kod?ˇly," continued the gold theme started the year before with "Dreams of Gold: The Music of Alexander Borodin." Zolt?ˇn Kod?ˇly was a Hungarian composer, born in 1882, who was famous in his home country for preserving and promoting the nation's ethnic folk music. He also preserved the music of Romania and ethnic regions that at one time were collectively known as Yugoslavia. Internationally, he's best remembered for conceiving the music education principles that others developed into the Kod?ˇly Method in the post-World War II years. The method included a set of hand signals for each degree of the musical scale, famously demonstrated in Steven Spielberg's 1977 movie, "Close Encounters of the Third Kind." Many of Kod?ˇly's melodies came from his collection of folk songs in remote Hungarian villages, which he recorded on wax phonograph cylinders. In the early 1900s, he introduced fellow Hungarian composer B?©la Bartók to the same collection, strongly influencing Bartók's musical direction. The two became best friends until Bartók's death in 1945, 17 years before Kod?ˇly's passing. Ultimately, Kod?ˇly's music might have been saved from obscurity after being championed so heavily by Bartók, who became far more famous than Kod?ˇly. Glassmen's 1999 production opened with "Allegro," the first movement from "Symphony in C." Kod?ˇly's only symphony gradually evolved over the course of creating sketches in the 1930s to completing the final movement in 1961 at the age of 79. Many musicologists consider the symphony the culmination of Kod?ˇly's lifelong work of gathering folk songs. The opening somber melody in the original was performed by the low stringed instruments of cellos and basses. In the corps' rendition, this led into one of the spirited folk songs the composer collected during his earlier travels. Flags of swirling gold and splashes of gold emblazoned on the color guard costumes were a visual reminder of the show's theme. The second part of the show was a suite based on the 1939 work, "Peacock Variations." The entire work consisted of 16 variations and a finale, but the corps' rendition borrowed ideas from just a couple of those, starting with a lovely chorale introduced by a mellophone solo. Three members of the color guard with large blue flags accented it visually. This transitioned into a spirited melody that saw some of the color guard members bring out green and black striped swing flags, with red and black striped swing flags soon added to the other hand. Slowly, the many colors of a peacock's tail were being unveiled on the field, culminating with all the flag spinners picking up silks of blue and yellow. After a break, a chorale variation from a third of the way into "Peacock Variations" featured a mellophone and trumpet duet. Flags of white, gold, blue and purple added to the peacock colors and built to an emotional climax before quickly falling back to the mellow musings of the solo mellophone. 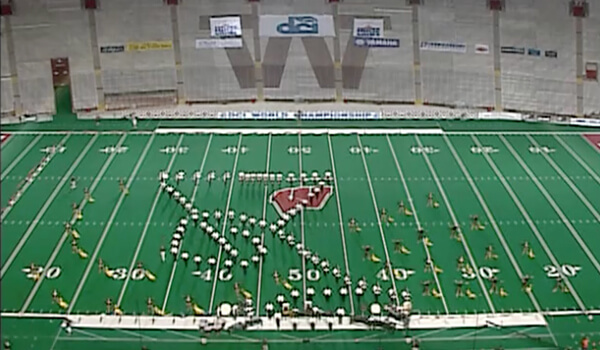 1999 Glassmen
Closing out Glassmen's production, "Entrance of the Emperor and His Court" was borrowed from Kod?ˇly's most famous work, "H?ˇry Janos," written in 1926. In his preface to the score of the folk opera, Kod?ˇly wrote, "H?ˇry is a peasant, a veteran soldier [from the early 19th Century] who day after day sits at the tavern spinning yarns about his heroic exploits." The stories were based on H?ˇry's overactive imagination. H?ˇry's stories were fantastical; he spoke of defeating Napoleon's armies all by himself and also capturing the heart of Napoleon's wife. After six horns comprised a miniature version of the corps' iconic triangle logo—seen frequently in the drill formations as much larger versions—moved through to form the point of a block triangle, horns poured in front of the pit percussion to bring the regal ceremony to a close. After a repeat fifth-place finish in 1999, the Glassmen would earn a spot among the top-12 finalist corps in ten of its remaining 13 seasons, disbanding prior to the 2013 season.

For this week only, you can save on the Legacy Collection DVD that contains this complete Glassmen performance, along with all finalists from the 1999 DCI World Championships.