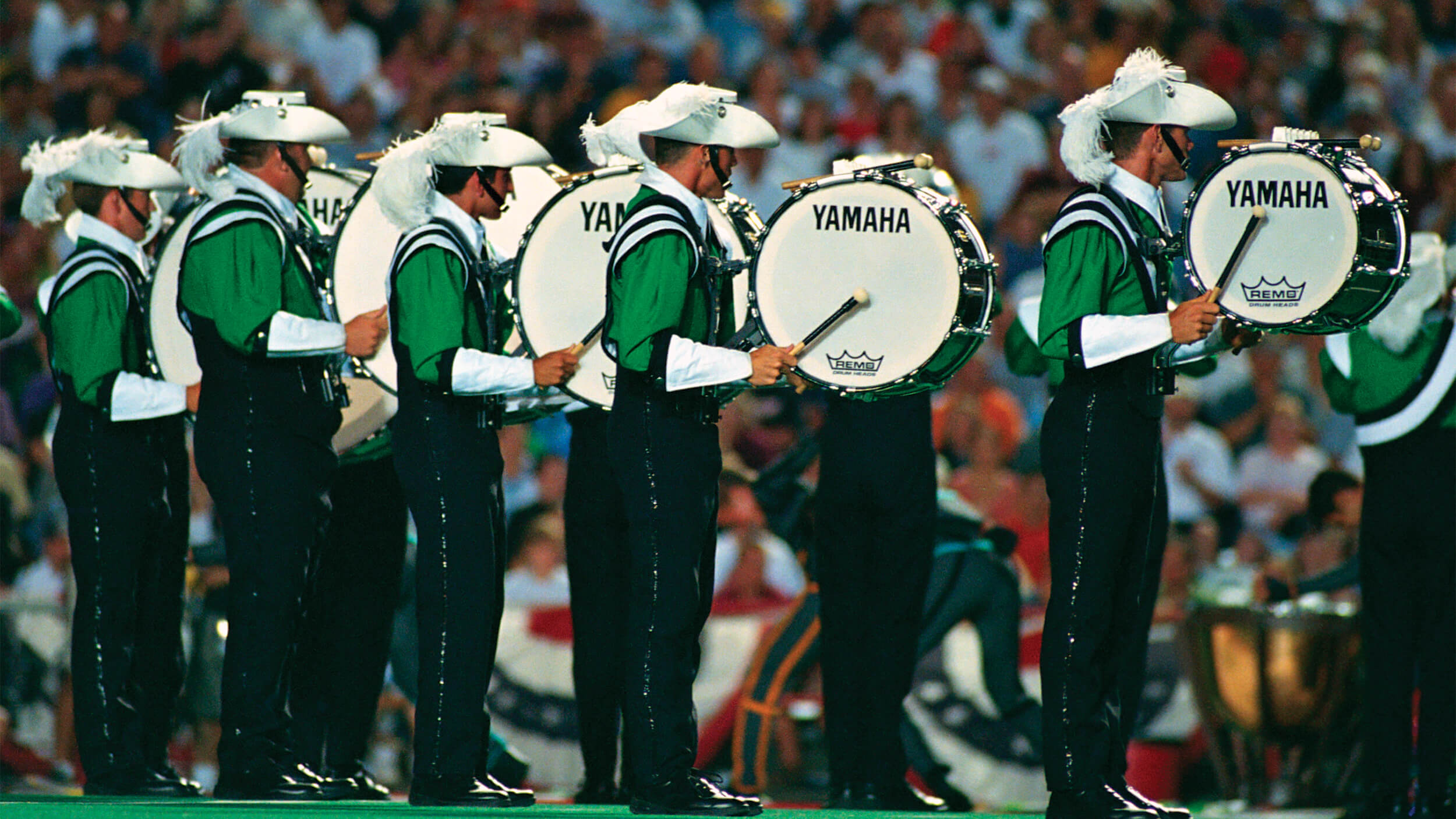 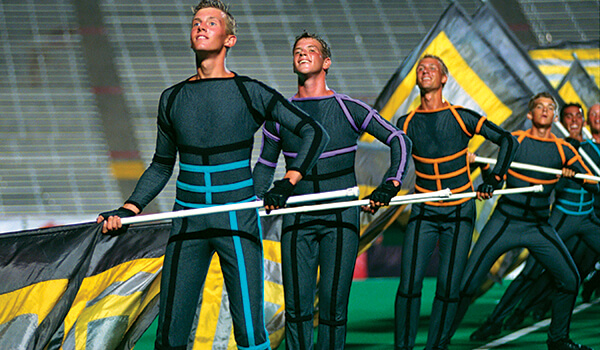 2002 Cavaliers
The 2002 Drum Corps International season ended with a record high score at the World Class Finals, when the Cavaliers pulled off a 99.15 to go undefeated for the season, winning their third DCI title in a row.
It was DCI's 30th anniversary held in Madison, Wis., just a few dozen miles from where it all began in Whitewater in 1972. The Cavaliers' 2002 production, "Frameworks," was as radical as it was astounding. According to Cavaliers program coordinator Scott Koter, since the corps' October planning meeting the show had the working title, "The Elements of Music/Design," and was to explore the most basic building blocks of music and choreography. At DCI's annual business meetings the winter of 2002, yours truly was chatting with Koter when he explained the concept of the show, then mentioned the staff wasn't all that excited about the title. For some reason, I blurted out, "You should name it 'Frameworks,'" and the name stuck.
Richard Saucedo provided the original brass music, Bret Kuhn the drum parts and Erik Johnson the front ensemble music; the music often inspired by the visual ideas of drill designer Michael Gaines. This fit well with the concept of the show, as the dictionary defines the term "framework" as "a basic arrangement, form, or system … a basis for something that is being constructed."
For centuries, composers had identified the basic "frameworks" of music to be melody, harmony, and rhythm. Therefore, the three movements of the show were simply titled, "Movement I – Melody," "Movement II – Harmony" and "Movement III – Rhythm." "Movement I – Melody" introduced the musical theme that returned throughout the show, starting with a simple 14-note melodic fragment played by a solo baritone. That fragment was passed to the trumpets who expanded upon it and threw in a little ornamentation.
The opening segment ended with a triangle of flags intersecting the block triangle of brass. The melody proceeded through a multi-rhythmic groove and a fugue. A fugue is a compositional technique where melodic lines in essence chase each other. During this, the visual drill evolutions seemed to float effortlessly from one to another, almost as if watching oil spread over water. 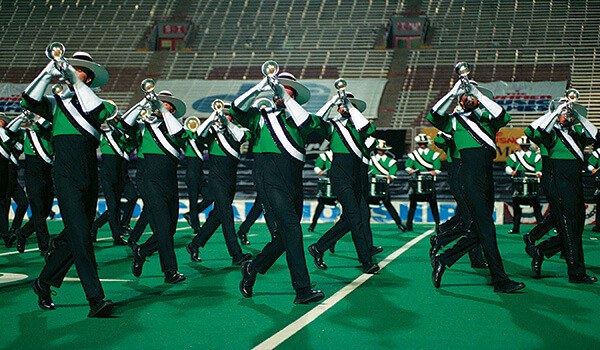 2002 Cavaliers
What was so intriguing to many was how the volume rarely seemed to get loud in order to achieve a high degree of effect, pulling the audience members forward in their seats and requiring a high degree of attention so they might catch all the nuances. Many said it was the most symphonically musical horn line they had ever heard up to that point. A visual highlight was when a rotating square of horns tumbled into a block triangle, with the corps members then jumping sideways a full two-and-a-half yards to reset the form.
"Movement II – Harmony" segued out of the first movement and further developed the prior melody by wrapping it in a variety of styles, tempos and moods. Much of this movement was performed to the backfield, creating a haunting reverberation off the back stands. As the subtle wafting of harmonies became more involved, so did the colors of the flags.
Two football-like forms met and collapsed into a single company front. Turning to the front, the brass seemed to turn into a pipe organ, torsos turning to pass the ethereal chords laid atop one another back and forth, up and down the entire line before resolving in a single major chord. The effect, as simple as its construction, was spellbinding. One could easily perceive the audience holding its collective breath until the resolution of the harmonies that were sailing into the nighttime sky. It truly was the purest essence of musical magic.
The brass players then formed two giant arcs that filled into one, with the first four notes of the show soaring over the top in mid-voice harmony. Only then was the audience comfortable with interrupting the exquisite enchantment with applause and cheers.
As the final chords of that movement evaporated, "Movement III – Rhythm" commenced with a brief statement from a woodblock of the popular, "shave and a haircut" rhythm known to children of all ages. This movement was conceived to express the sheer joy of rhythm, the most basic of all elements of music that could perhaps be traced to cavemen banging on rocks. The percussion played the biggest role in this segment, repeatedly playing the main rhythmic statement in a variety of different ways atop a repetitive pulse. The horns cut loose with a jazzy fragment of their own, the trumpets glissing notes upward at the end of the phrase.
The color guard members picked up a variety of colored sticks that corresponded to their individual piping on their costumes. The horns again swaggered to the side in a block as the drums took over and the guard formed a square that would provide the ring for what the corps dubbed "Fight Club," one of the most iconic moments ever experienced in the history of drum corps.
The horns rhythmically tapped on the valves of their instruments and shouted out the counts of the rhythm. And then all hell broke loose. It was a glorious combination of dance and macho strutting unlike anything seen before or since.
Evolving out of "Fight Club," pinpoints of brass volleyed across the field and all previous melodic, harmonic and rhythmic elements came back for a curtain call. The curtain then took the form of a company front, alternating horns rotating while all moved forward, the same number of horn bells always facing forward at any given moment.
A brief kung-fu-like reprise of "Fight Club," with arms flailing and legs kicking, led into a final visual cacophony of scattering within a large square, magically resolving to a box of horns collapsing into a diagonal arc, leaving everyone in the stands to ponder, "What just happened here?"

For this week only, you can save on the DVD that contains this complete Cavaliers performance, along with all of the finalist corps at the 2002 DCI World Championship.