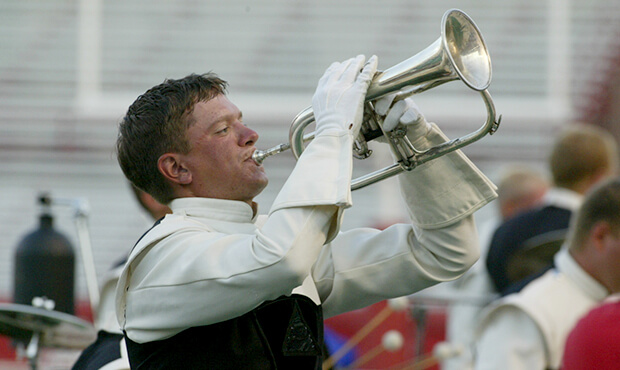 
Drum Corps International's 30th anniversary season of 2002 culminated with the Cavaliers capturing the second three-peat in World Class World Championship history, topping off an undefeated season at the University of Wisconsin's Camp Randall Stadium with a then-record score of 99.150.

2002 also marked a good year for corps that weren't finalists in 2001, including Spirit of Atlanta (making the top 12 for the first time since 1990), Magic of Orlando (after two years of inactivity and competing all season in Division II), and the Seattle Cascades (a Division III corps just two years prior).

Glassmen's eighth-place "Odyssey" production was filled with epic themes of adventure and heroism. The corps got things started in one continuous squiggly arc stretched across the field to "Introduction & Dance," based on the theme of American composer Michael Torke's "Javelin."

The bulk of the show was music from Michael Kamen's "The New Moon in the Old Moon's Arms." Kamen was best known for his film scores, such as "Robin Hood, Prince of Thieves," "Mr. Holland's Opus" and the "Die Hard" series. He also worked with several rock bands, creating symphonic arrangements of their works that were often featured in concerts with full orchestras.

Written in 2000, the multi-movement "New Moon …" was dubbed a "classical symphony," inspired by the Native American Anasazi tribes of the American southwest, a vibrant culture that mysteriously vanished about 1,000 years ago.

It's that 1,000-year timeframe that led the Glassmen to refer to the Kamen piece not by its real name, but by the title, "Millennium Symphony." The corps utilized the music but not the visual imagery implied by Kamen's program notes, and so it was thought calling the piece by its given title might lead many to expect certain themes to be portrayed on the field.

After the Torke fanfare, the corps moved into "Millennium Symphony, Mvt. I," based on what Kamen had titled, "1,000 AD." The music was an almost introspective journey into the life, accomplishments, and celebrations of the culture for which we know so little, except for the physical structures and infrastructure left behind.

Evocative solemnity in the music was mixed with mysterious elements of exotic adventure and even some danger, with angular brass outbursts accompanying the primal intensity of the ceremonial percussive rhythms. Teetering on the edge of slipping into jazz during its most raucous moments, the music continuously pulled back from the verge of jumping 1,000 years ahead to indirectly remind us of the ancient culture that was referenced, though never in a direct manner. 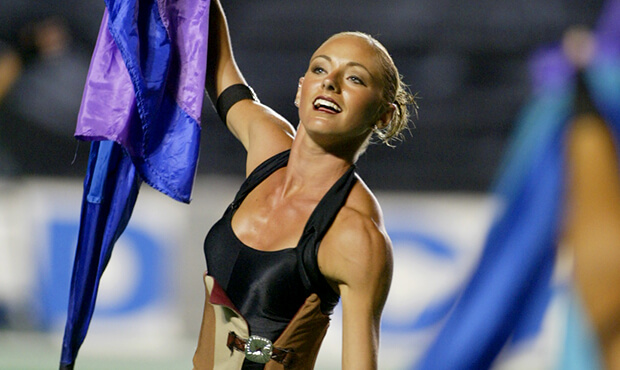 
An extended two-minute flugelhorn solo of "Millennium Symphony, Scherzo" was from "Old Moon's" movement, "The Prayer: Scherzo II ?˜Dansa Kokopelli,'" referencing the humpbacked flute player icon most immediately thought of as representing the Anasazi people. This was arguably one of the most haunting and exposed horn solos in drum corps history.

Native American hand drums and large ceremonial surdo (Brazilian bass) drums accented the continuous flugelhorn offering, with hues of regal blues and purples in the color guard flags providing a sense of quiet reverence without fully tipping the hand to the source of Kamen's inspiration. The horn solo was so out in the open throughout the production that the soloist seemed to have ice water in his veins.

The corps returned to Michael Torke's heroic "Javelin" for its closer, a piece that was commissioned in 1994 in honor of the 1996 Atlanta Centennial Olympics and the 50th anniversary of the Atlanta Symphony Orchestra. Sparkling and triumphant, brightly colored orange and purple flags stoked the fire of the bright piece that boldly put an exclamation mark on the production, and shook us vigorously back to the 21st Century.

For this week only, you can save on the DVD that contains this complete Glassmen performance, along with all of the finalist corps at the 2002 DCI World Championship.