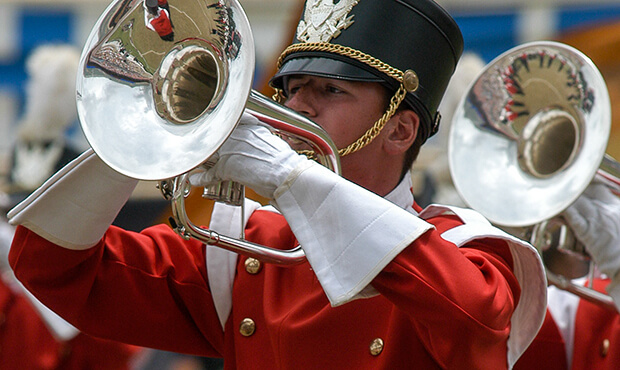 2003 Patriots
For the first time in Drum Corps International history, the 2003 DCI World Championships had all three competitive classes competing in their respective Finals competition on the same day. This gave drum corps fans traveling to Orlando for the Championships a better opportunity to witness the Division II & III Finals held earlier in the day. The parity among the top Division II & III corps was impressive, with the major caption awards being well spread out. While Esperanza won its first Division II title by taking Brass Performance and Overall General Effect, the silver medalist Patriots took Color Guard and Visual Performance, while the bronze medalist Spartans captured top honors in Percussion. Jersey Surf won the Division II Spirit of Disney Award. The Patriots was a member of a much larger organization founded by a group of Rochester, New York parents prior to 1976. Among other ensembles in the organization was a winter guard and indoor marching percussion line. The corps had won the DCI Division II Championship in 1999, and in its later years was known for exploring unique and contemporary music not generally heard on the football field. The corps' 2003 "Illusions" show began with "A Kaleidoscope of Mathematics," the James Horner theme from the 2001 film, "A Beautiful Mind." Horner is a prolific composer for films and multitudes of his works have been performed on the drum corps field. The Ron Howard directed film won the 2002 Academy Award for Best Picture. The piece began with the entire corps positioned in the form of a circle, the purest geometric form. While the strong horn line wasn't much larger than 44 members, from the beginning it was apparent the huge color guard section of 36 members would have an equally huge presence in the show. Two more Horner selections followed, including the humorously ominous "First Haunting" and the comically spirited "The Swordfight." Both selections came from the 1995 film, "Casper," which was based on the children's book character and 1945 animated cartoon "Casper the Friendly Ghost." The show concluded with "Adiemus Medley," a piece that took selections from Karl Jenkins' "Adiemus" series of albums which feature contemporary symphonic choral pieces without words. Jenkins is a Welsh composer with a jazz-rock background who wrote several works for British advertising. Perhaps his most famous is the long-running De Beers diamond commercial theme that he later turned into the first movement of his work, "Palladio." 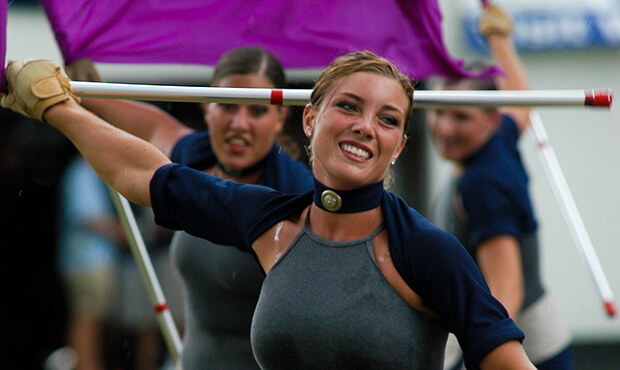 2003 Patriots
In the original format, the "Adiemus" pieces sounded as if they were based on actual languages, but Jenkins selected the sounds for how each conveyed the emotions of the individual pieces. "Chorale VI: Sol Fa" and "Cantus: Song of the Plains" were both derived from "Adiemus II: Cantata Mundi," the 1997 second album in the series. "Kayama" came from the 1995 premier album in the series, "Songs of Sanctuary." During this part of the show, the corps members sang a few measures of the lyrics toward the end of the show. Sadly, the Patriots did not field a group in 2004 and the 2003 Division II Finals would be the last time drum corps audiences would see this progressive corps on the field.

For this week only, you can save on the DVD that contains this complete Patriots performance, along with all finalists from the 2003 DCI Division II & III World Championships.