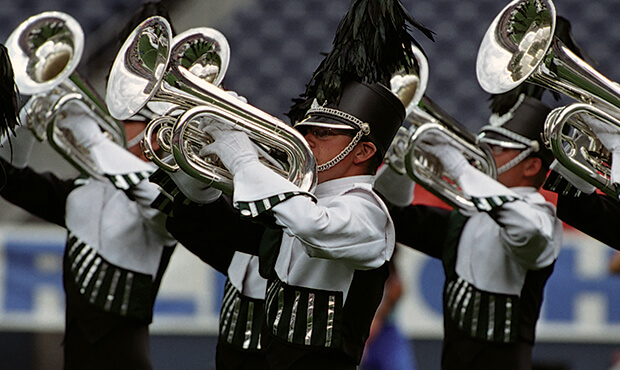 2004 Seattle Cascades
The 2004 Drum Corps International World Championships came to Denver's three-year-old Invesco Field at Mile High (now Sports Authority Field). The stadium sits immediately next to where the old Mile High Stadium had stood over a quarter century earlier during the World Championships of 1977 and 1978. Spirit from JSU missed a spot in the top-12 Finals competition by a margin of only 0.075, followed by Semifinalists Capital Regiment, Seattle Cascades, Colts, and Magic of Orlando, who in the Quarterfinals, knocked Southwind out of the Semis by less than half a point. Just under Southwind were Pacific Crest, Mandarins and Esperanza, three California corps that had recently moved up to World Class competition. Seattle Cascades 15th-place show, "Nature's Confession," duplicated the placement the corps achieved in 2003, one year after finishing 12th at the 2002 DCI World Championship Finals. The 2004 show was the corps' tribute to the natural beauty of its Pacific Northwest home, divided into five segments titled "Sky," "Land," "Sea," "Tempest" and "Heavens." "Sky" opened the show with "Distant Showers" by Scott Boerma and Rob Lewis, the corps' arrangers. Boerma had long been the brass arranger for the Madison Scouts. Lewis, who had worked with the corps from 1999 through 2002, returned as percussion arranger after a season away. The piece was conceived to represent the tranquil showers that renew the energy source for the region's rivers and forests; opening with silence, passing through some solo musings by the brass, and building up to a big fanfare borrowed from a work that ended the show. "Land" was based on Ron Nelson's "Savannah River Holiday," its bubbly rhythms symbolizing the rugged Cascade Range and its fluid melodies the smooth plains of Washington State. Nelson is best known for his "Rocky Point Holiday," which was written for both orchestra and concert band in 1979. "Savannah River Holiday" was originally written for orchestra in 1977 and wasn't arranged for concert band until 1973, inspired by the success of his band version of "Rocky Point Holiday." In its original form, the work represents the moods of the Savannah River that divides Georgia and South Carolina for all but the two states' northernmost-shared border. The purple flags used by color guard members in this section had a wide stripe—mostly of two shades of blue—running down the center, likely representing the rivers that run down the mountains. The segment titled "Sea" was based on "Birth" from Benoit Jutras' music for the 2000 IMAX motion picture, "Journey of Man," capturing the splendor of what lies under the waves of Puget Sound and the Pacific Ocean. Jutras is best known as the primary composer for various Cirque du Soleil productions, and Cirque musicians recorded the musical score for the film. In the Cascades' production, the work opened with a trumpet solo and flowed into a horn line statement facing backfield. In the accompanying video clip, you'll see many percussionists playing ocean drums that have metal shot encased between the two round heads. When lightly rocked from side-to-side, the shot rolls across the wooden shells and creates a sound akin to that of waves gently crashing on the shore. Long, flowing flags further added to the tranquility with pastel colors of the open ocean. V?ˇclav Nelh?˝bel's "Allegro Impetuoso" was the source music for the segment titled, "Tempest," exemplifying the rage and fury of nature at its most cataclysmic. Nelh?˝bel, whose modernistic music was frequently inspired by his Czech heritage, became one of the most-played composers of school band music. His works were often full of brash brass, tone clusters of woodwinds and dramatic outbursts of rhythmic percussion. "Allegro Impetuoso" was the second movement of the composer's "Two Symphonic Movements," written in 1970. The term, "impetuoso," is based on "impetuous," meaning in this sense to move with great force, often violently so. And that's exactly the mood set in this part of the corps' production. 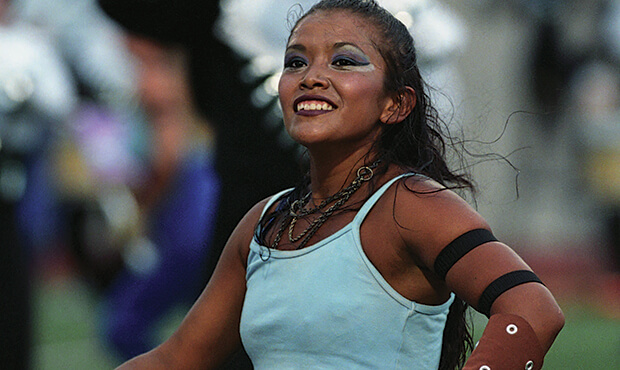 2004 Seattle Cascades
The production concluded with "Heavens," based on John Rutter's "All Things Bright and Beautiful," completing the confession with a resolution of serene tranquility. Rutter, founder and director of the famed Cambridge Singers, is largely known as a British composer of choral anthems. There are many melodies of "All Things Bright and Beautiful," originally an Anglican hymn and found in hymnbooks of several denominations. Cecil Frances Alexander, a 19th Century Irish poet and prolific writer of hymns, wrote the text and published it in her "Hymns for Little Children." Closing out the production, flags from earlier in the show were brought back in five different pods of color for a rousing and loud epilogue that ended with corps members forming a company front.

For this week only, you can save on the DVD that contains this complete Seattle Cascades performance, along with all corps from the 2004 DCI Division I, Volume II disc.