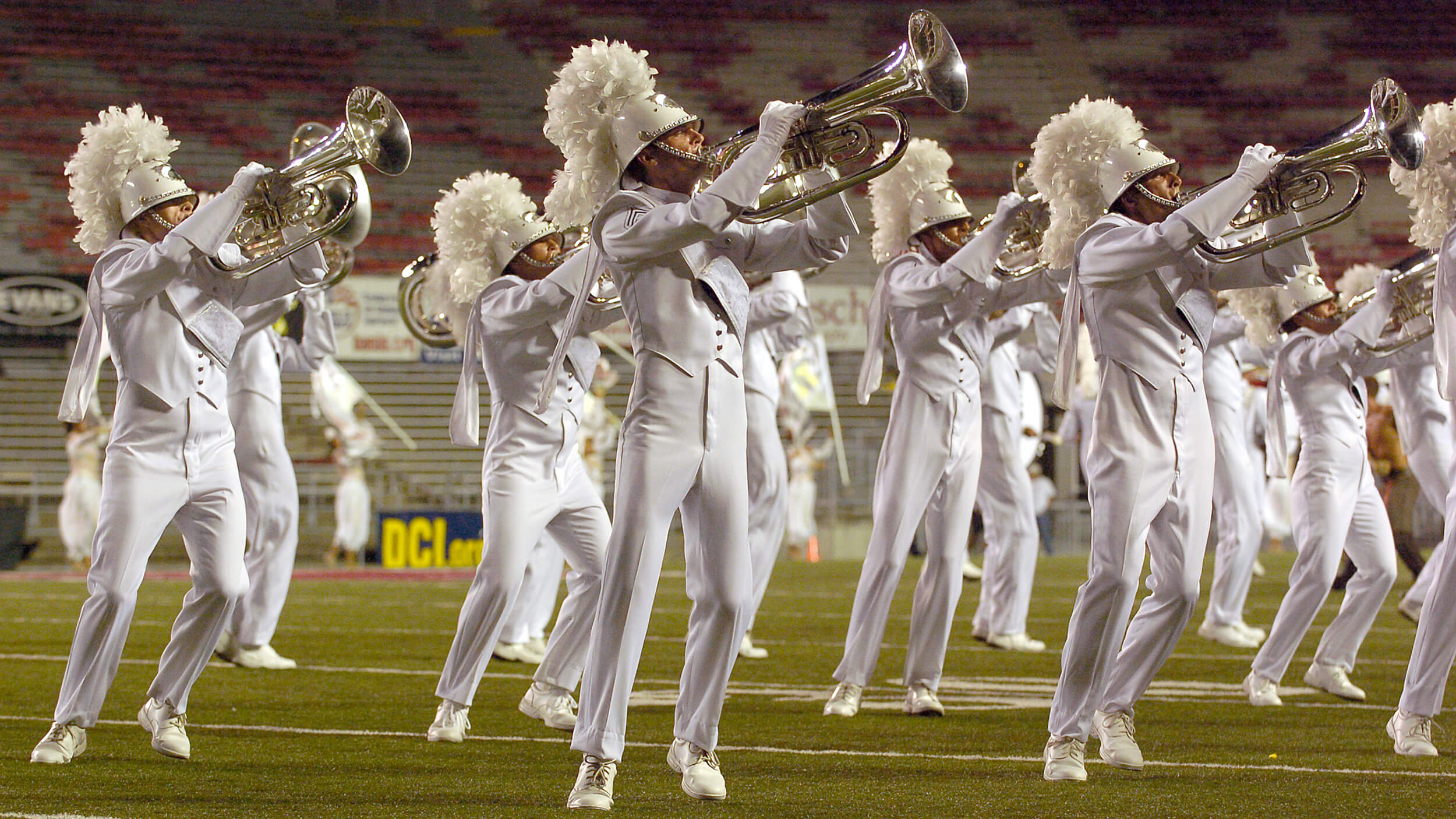 Many may remember the 2006 Drum Corps International Tour for the Midwest heat wave that kept several corps practicing indoors through much of July, and for recurring rains that cancelled numerous shows, including the Masters of the Summer Music Games the day prior to the new DCI Southeastern Championship in Atlanta.

Fortunately, the searing heat dissipated by the time of the DCI World Championships in Madison, Wisconsin, which DCI hosted for the seventh time at the newly-renovated Camp Randall Stadium.

The number seven also proved important to The Cavaliers, earning the corps’ seventh DCI World Championship title for “Machine,” a show that demonstrated we should not fear our robotic overlords. Blue Devils’ “The Godfather, Part BLUE” show finished in third, only 0.65 points behind the top score, followed by the fourth-place Bluecoats, who passed The Cadets by just a tenth of a point, one year after the east coast corps won the title by tying what was then the highest Finals score ever recorded.

In second place, Phantom Regiment finished just 0.35 points under The Cavaliers and three tenths over the Blue Devils, after placing third in the Quarterfinals competition.

Regiment’s 2006 production, titled “Faust,” was modeled after the German legend of a man who sold his soul to the Devil via the dark angel’s representative, Mephistopheles, in exchange for a lifetime of unlimited knowledge and pleasure. Playwright Christopher Marlowe popularized the story in English-speaking countries in 1604, and it became universally famous when Johann Wolfgang von Goethe created his own play around 1775. It is known as one of the most classic tales of good-versus-evil.

The show began menacingly with males in the color guard section dressed as hooded demons as foreboding strains of music wafted forth from the front ensemble percussion section. The title character Faust attempted to woo a maiden of incredible beauty and innocence, known as Marguerite — Identified by the pinkish-red highlights of her costume that distinguished her from the rest of the females of the guard wearing similar off-white costumes.

As the menacing eyes of a blood-red triangular silk sailed over them, a demon magically replaced Faust. Previously performed by Regiment in 1984, the corps kicked into the “Adoration of Vela/Enemy God” from Sergei Prokofiev’s 1915 “Scythian Suite,” written when the Russian composer was 24 years old. 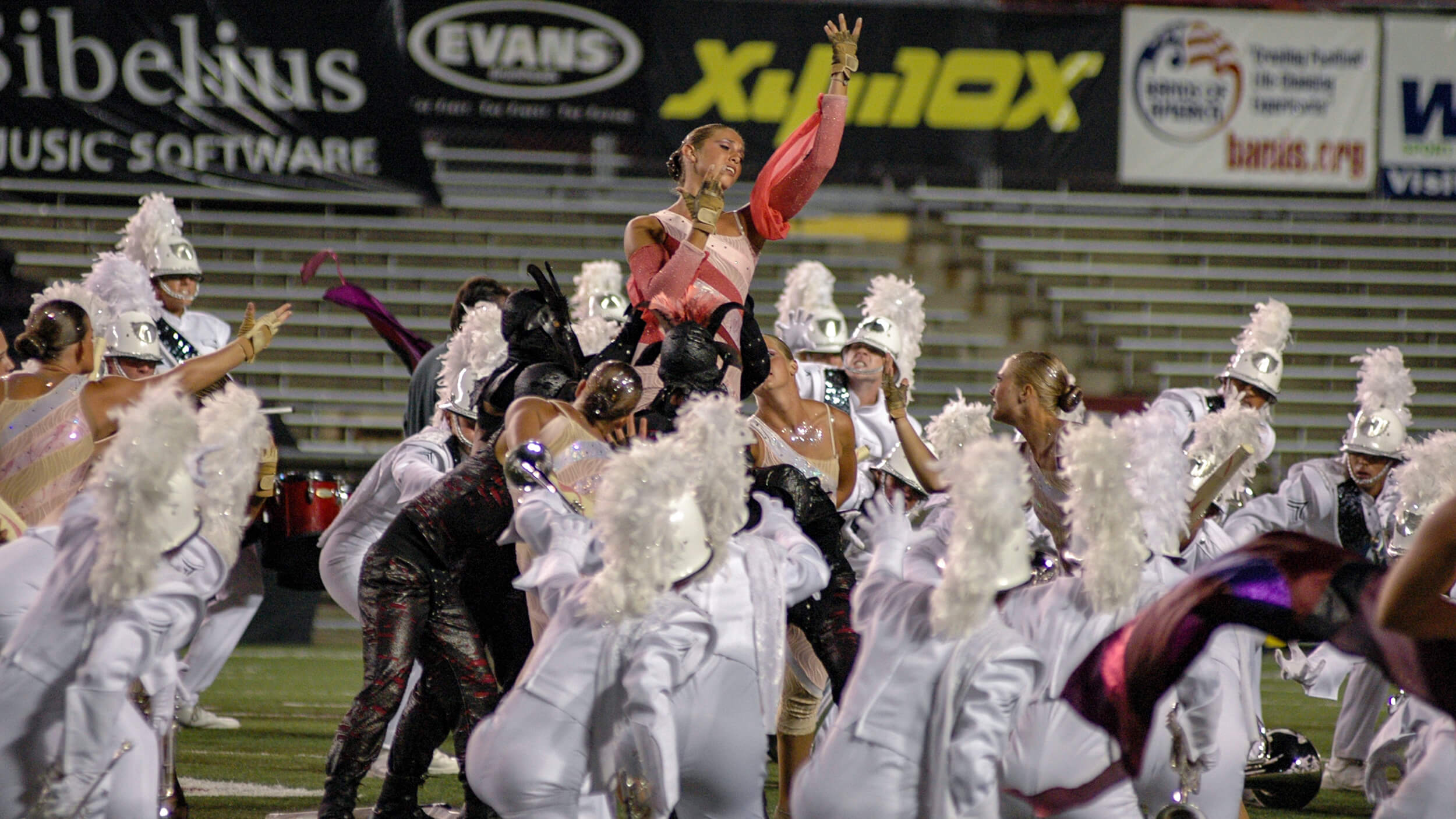 Visually as the corps evolved into a five-point star tipped on its side, the introductory music launched into the brutally raucous segment the composer referred to as “Invocation to Veles and Ala.” This barbarically sinister movement referred to the Scythians (who lived in what is now Siberia) worshipping the sun and praying to the Slavic god of land, seas, and the underworld.

With the corps facing backfield, the second part of the opener, a slow waltz-like segment, came from the quieter moments in the third movement of the suite, “Night.” Members of the horn line attempted to keep the demon Mephistopheles from reaching the calming presence of Marguerite, putting their hands out in a “stop” gesture, preventing the demon from passing through two separate horn arcs to reach his intended victim.

After a short repose, the corps launched into the second movement of the suite, “The Evil God and the Dance of the Pagan Monsters,” known to Emerson, Lake & Palmer devotees as “The Enemy God Dances With the Black Spirits” from the progressive rock band’s “Works Volume 1” album of 1977. This movement featured a frenzied percussion feature in between the brash musings of the brass, with Marguerite interacting with the Devil and his posse against her better wishes. A squad of demons hoisted her high, indicating her earthbound existence was not going to be easy.

Originally written for seven-part male chorus, Regiment next turned to German composer Fran Biebl’s “Ave Maria.” All trumpet players came to the front sideline to exchange their instruments for baritones, creating a luscious brass sonority reminiscent of the original. The masked Mephistopheles interacted with Marguerite, trying to woo her to the dark side, but he was destined to fail, at least temporarily, due to the overwhelming spiritual bliss of the music.

Next, a demon broke the couple apart at the start of the first movement of John Corigliano’s “Piano Concerto,” “Molto Allegro.” The brass section interpreted the vicious three-note motif originally stated by piano, followed by a faithful reproduction of the virtuosic piano parts by the mallet percussion instruments. Fighting for the eternal soul of Marguerite, the demons finally subdued her and covered her with a black shroud.

Gustav Mahler’s finale from his “Symphony No. 2 (Resurrection Symphony),” premiered in 1895 and performed by the corps in 1986, immediately grew out of the dissonance of the Corigliano work to provide hope that evil can be struck from the earth. The shroud was pulled back and Marguerite herself was resurrected, now wearing a pink head mask. Mephistopheles attacked a fellow demon and pulled off his hood, causing the demon to perish. As the heroic strains of the closer filled the stadium, Marguerite donned large wings and was transported off on pathways of light to paradise.

One brass player was not so fortunate. At the beginning of the closer the rest of the horn line turned over their black sashes to reveal white sashes that matched the rest of the corps proper uniform, the action a symbol of renouncing evil. The lone horn player that “forgot” to do so was transported off the field by enraged demons eager to go home with at least one damned soul.