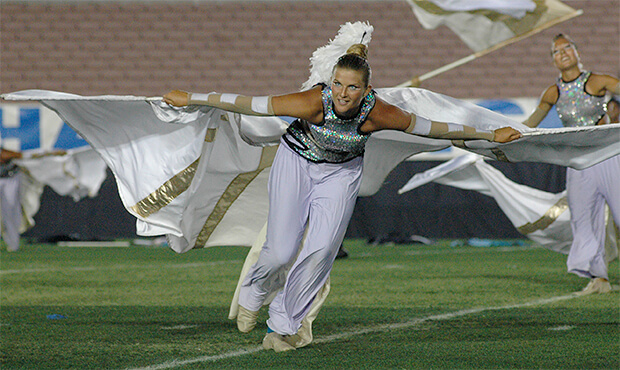 2007 Blue Devils
The 2007 Drum Corps International World Championships in Pasadena marked the first time the big show traveled west of the Rockies in 35 years. Coming just a week after the corps' big 50th anniversary celebration, Blue Devils won their 12th DCI World Championship title after edging the Cadets in the Semifinals competition by a scant five-hundredths of a point. The corps' "Winged Victory" production took its title from the famed ancient Greek Winged Victory of Samothrace statue that stands guard over the grand staircase of the Louvre Museum in Paris. The statue served as the muse to the Blue Devils' mythological odyssey and transformation from darkness into light. Bowing to the corps' past, the presence of the statue was seen throughout the show in the color guard "wings" that were an innovation and hallmark from 25 years earlier. The story of the wings goes back to 1982, after the corps' color guard had gotten rid of their formal uniforms, which in turn opened up greater possibilities for dance. The guard designer and instructor then, Shirley Dorritie, was looking for ways that fabric could be connected from the ankle to "as high as we could reach," giving the guard members "an opportunity to use color in and of itself." According to a 2007 interview, Dorritie's goal was to "find an impact that was different from just rifles and flags." For the 1982 season, only 12 sets of wings were utilized, but an additional 20 were brought onto the field the following year. Prior to 1982, it was not uncommon for color guards to use flags that essentially matched the color of their uniforms. In planning the "Winged Victory" show, color guard designer Scott Chandler called Dorritie to ask what inspired her to conceive the first wings. When she told him she just wanted to get huge amounts of color out on the field, he responded, "Oh, I get it. It was about something very different than what had come before." He then directed his focus for the 2007 visual concept to using the wings to create massed darkness and then masses of light. Due to the almost pure blackness of the opening wings—each with a few light stripes on the inside for depth—the production started out quite dark. The opening section of the show was referred to as "Pegasus Fantasy," based on Hank Levy's "Pegasus." Levy was a saxophonist who frequently contributed works to the Stan Kenton Orchestra and also wrote for Don Ellis' bands. "Pegasus" was recorded on Kenton's "Journey Into Capricorn" album of 1976, which turned out to be Kenton's final studio recording. "Pegasus" also was a lucky charm of sorts for the Blue Devils. The corps had previously played it in its World Championship-winning years of 1980 and 1982, making 2007 the third time the corps won with the selection. At the end of the tune, about 2.5 minutes into the show, the horn line formed a diagonal line across the field and started playing a series of what sounded like their well-known warm-up "space chords." As the battery percussion wove in front and in back of the line, an amplified evil laugh jumped out of the chaos. The second segment of the show, "The Ascension," commenced with a percussion break that featured the snare drums executing a multitude of shifting body positions while playing. The color guard section, except for one member, lost the black wings and then stripped off their dark blue costumes to reveal much brighter attire underneath—sparkly silver and white for the females and white with some shades of blue for the males. Part of the music heard during this section, and also hinted at during the earlier "Pegasus" section, was Carl Vine's "Celebrare Celeberrime," a 1993 fanfare subtitled, "A Celebration for Orchestra." Vine commented that the intention of the short piece was to lead, as quickly as possible, to a sense of joy and excitement, which made it an appropriate work to climb out of the darkness of the Blue Devils opener. The third and final segment of the show, "Heaven," was the longest, taking up about half the production. "The Kiss" by Michael Torke was a 2006 work for wind ensemble written for the 50th anniversary of the California Band Directors Association. Torke is probably best known for his 1996 work, "Javelin," which was commission for the 1996 Olympics in Atlanta and the 50th anniversary of the Atlanta Symphony Orchestra. 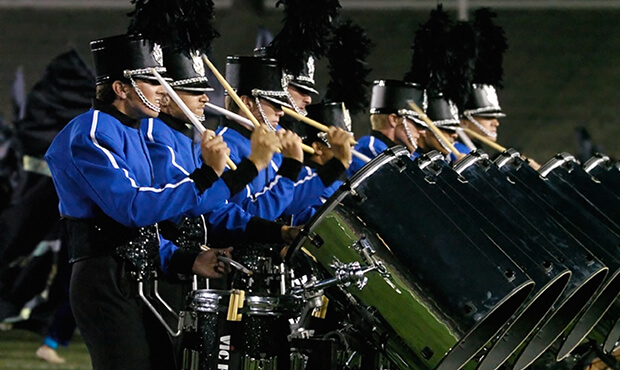 2007 Blue Devils
The music and colors in the guard section gradually brightened, a sense of affirmation slowly unwrapping across the field. All elements of the show became happier and more optimistic. White color guard wings, satin-like with a subtle hint of a pastel hue caused by the reflection of the stadium lights, instantly turned the field into a much happier place. The effect was like the rays of the sun blazing upon the field with a sense of hope and awe. In a magnificent visual moment, the horns came to the front of the field in a diagonal block as the melody reached its most ecstatic climax. Then, moving toward the center of the field around a gentle, almost flat arc, each row of brass players broke off every three counts, half moving to one side and the other half moving to the other side as the next row filled in to itself break off. This went on until all horns had broken through to the front of the block and peeled off. The effect was like that of watching a theater curtain open up to reveal the main act on stage. With white wings floating high and white flags spinning in between the wings, a hint of Beethoven's "Ode to Joy" sailed out from the brass section. This was a tip of the shakos to the corps' first competitive season of 1971, just a year after founder Jerry Seawright turned the Blue Devils Drum and Bell Corps into a drum and bugle corps and set in motion the most successful corps in DCI history.