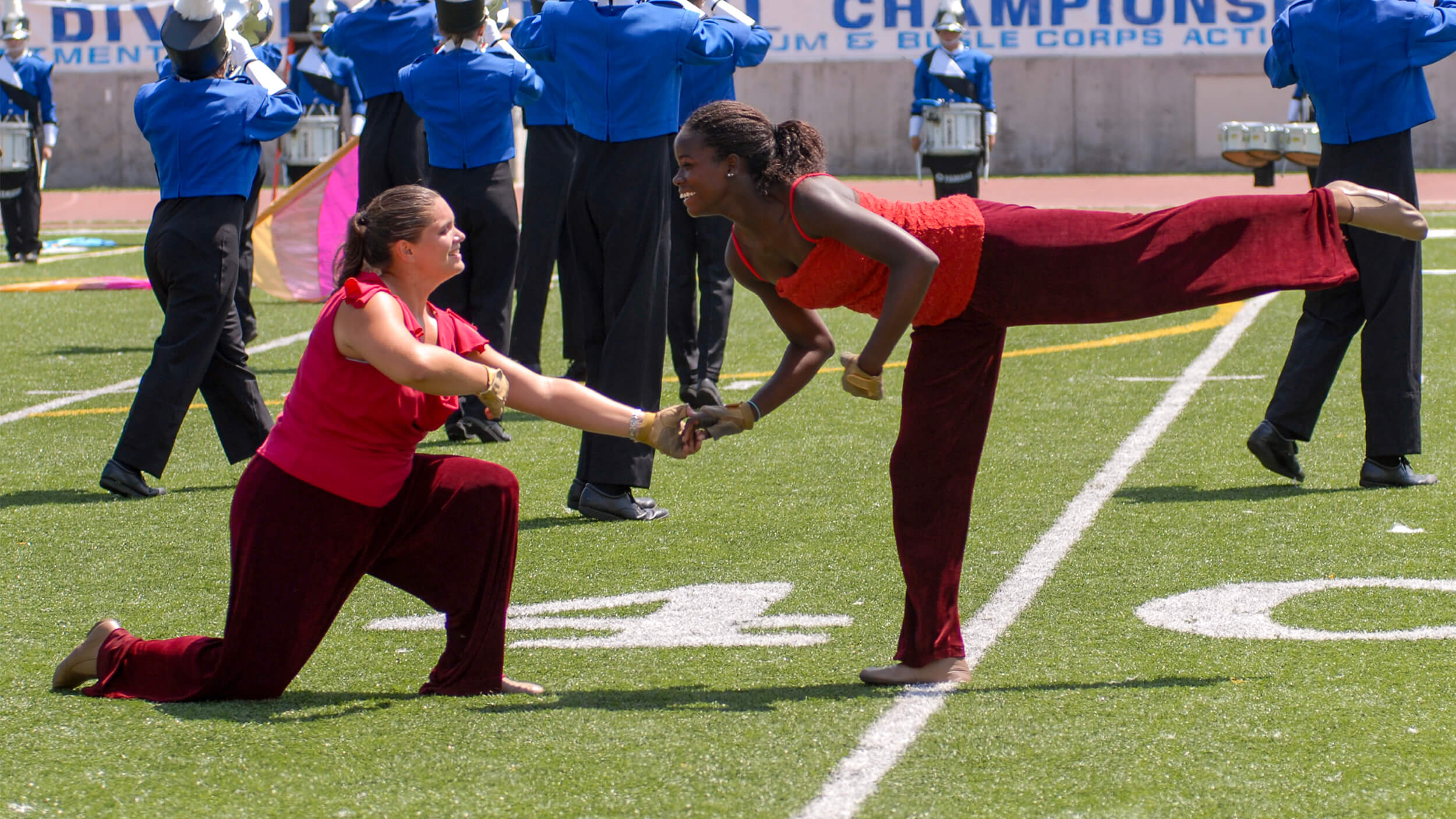 After their 2005 win and achieving a bronze-medal finish in 2006, Raiders made the jump to Division II competition as the DCI World Championships came to Pasadena, California for the celebration of the 35th anniversary of Drum Corps International. It marked the first time the New Jersey corps competed at the Division II level since 1995, interestingly also another year the corps featured a musical theater production, “A Chorus Line.”

In addition to the Leonard Bernstein score to the musical that has been known and loved around the world for decades, Raiders also set out with their production to combine the Johnny Richards edition scored for Stan Kenton’s Mellophonium Band. Drum Corps International staff writer Michael Boo penned as the corps’ entry in the 2007 DCI Souvenir Yearbook:

Leonard Bernstein’s vivacious score to West Side Story is arguably the greatest accomplishment in American musical theater. Full of tension, conflict, forbidden love and vibrant sounds of disparate cultures, the classic orchestral jazz music has only grown in popularity since it was first heard. In 1961, Johnny Richards reinvented the work for Stan Kenton’s Mellophonium Band, lending a hipper edge to the music and further increasing the popularity of the haunting melodies. By combining the two version of the musical, Raiders further give emphasis to the conflicts inherent in the music. 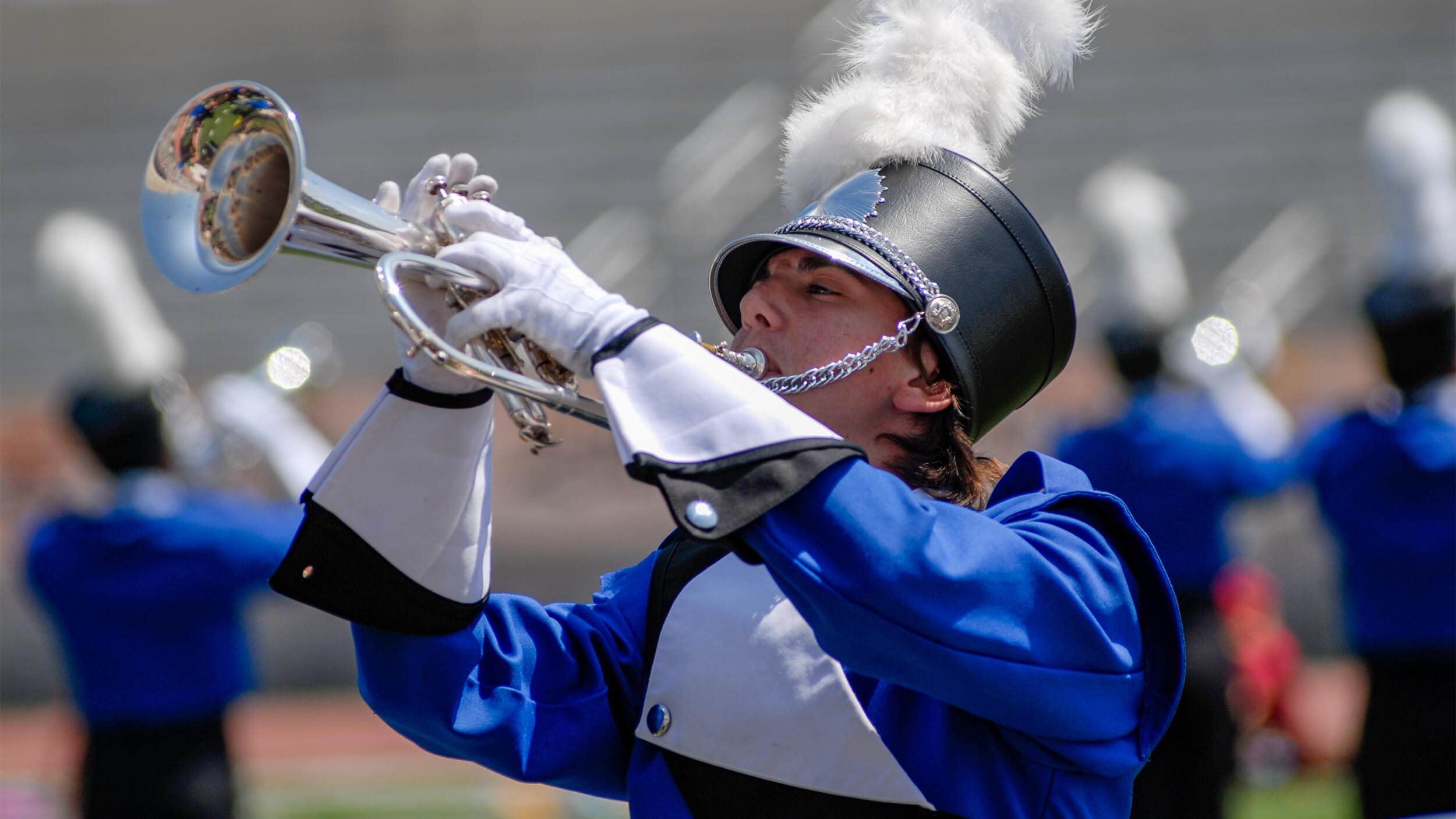 Raiders’ uniforms in 2007 featured black pants and shoes with a blue top trimmed with a black and white sash and gauntlets. Their headgear featured a black shako with a white plume. Color guard members wore maroon pants with red sleeveless tops in various different cuts.

Raiders opened the production in a triangle block offset on the 40-yard line of stage right. The brass formed the sides of the triangle while the color guard members filled the center.

Creating visual interest, the flags started spinning as the stationary brass section entered with a series of stabbing notes reminiscent of the Richards arrangement of “Prologue” for the Kenton Band. The color guard quickly exited the form making their own triangle around the rest of the corps as the brass played the familiar six-note motif of the “Prologue.”

A brief interlude of “I Have a Love” brought color guard members down to the front sideline to trade flags for rifles for the following segment of “Cool,” the Bernstein piece that author Nigel Simeone described as “a stunningly exciting jazz fugue the like of which had never been heard on Broadway before.”

Raiders’ arrangement stayed true to the original, melodically led by the brass section, but taking the opportunity to throw in a short drum break and to pass the melody along to the front ensemble keyboardists. The piece built to a “park and blow” by the brass section as they leaned back into a shout chorus of the main melody.

As the piece came to its conclusion, a trumpet soloist came to the front of the field switching to a flugelhorn as the corps slowed down the tempo for “One Hand, One Heart,” the poignant duet sung by “West Side Story” characters Maria and Tony while role-playing their wedding in the musical. Color guard performers danced in pairs for this segment before picking up pink- and red-hued flags, helping to underscore the love theme. 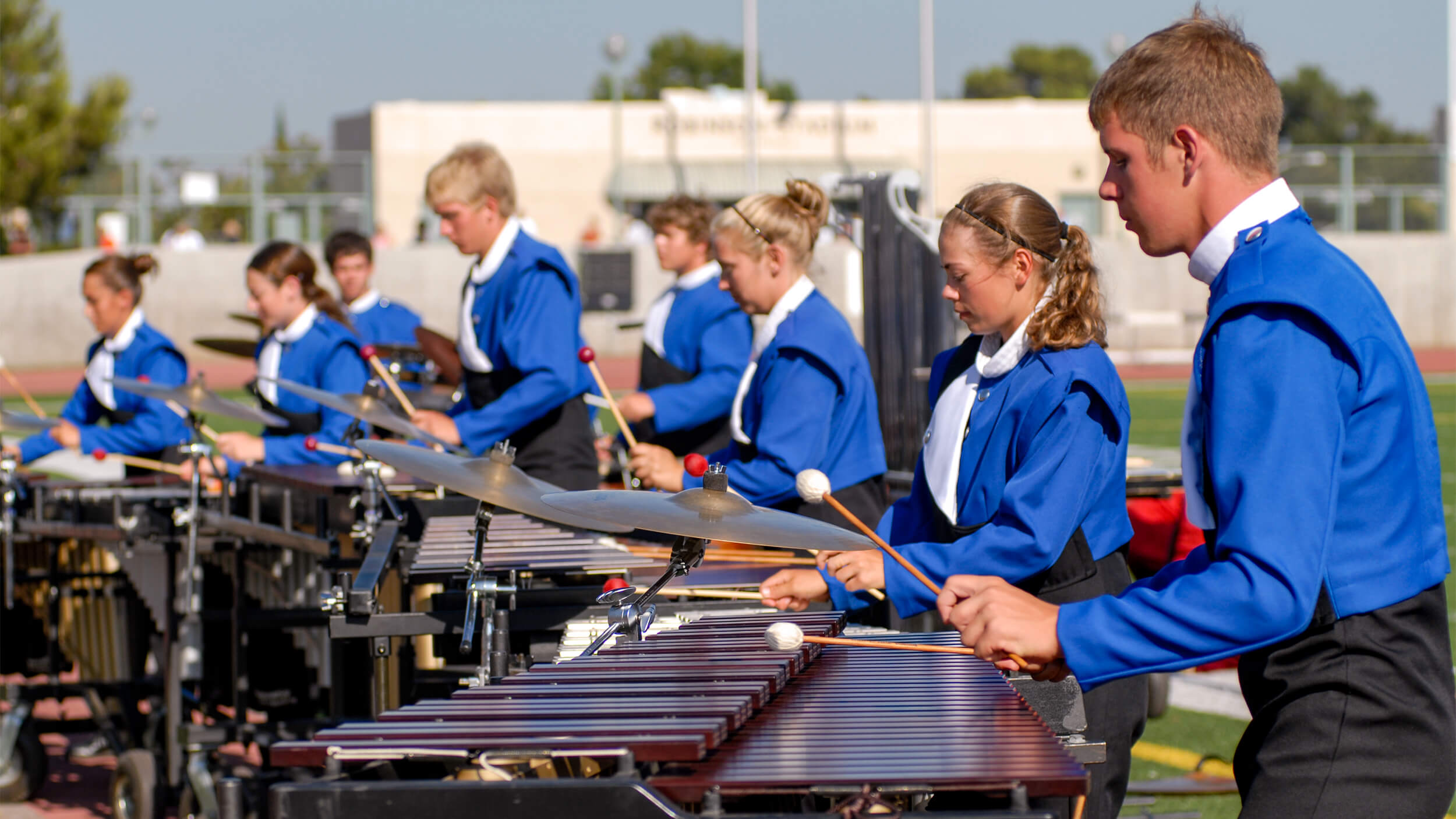 A long snare roll built anticipation to the powerful opening notes from “Dance at the Gym.” The sultry opening featured pairs of brass players positioned in a scatter formation, as they once again let loose.

Like the Broadway and film versions of West Side Story, “Dance at the Gym” transitioned into “Mambo.” Claves and timbales in the front ensemble percussion section set the Latin groove with the mallet keyboards eventually picking up the melody. Now performing with sabers, the color guard worked around the brass players who offered up a series of growling interjections ever-present in the original Bernstein score.

The next minute of the production was dedicated to “Tonight,” starting slow and soft but quickly picking up the pace. Keeping things upbeat all the way to the end, “America” marked the final selection in the corps’ tribute to one of the greatest musicals of all time.