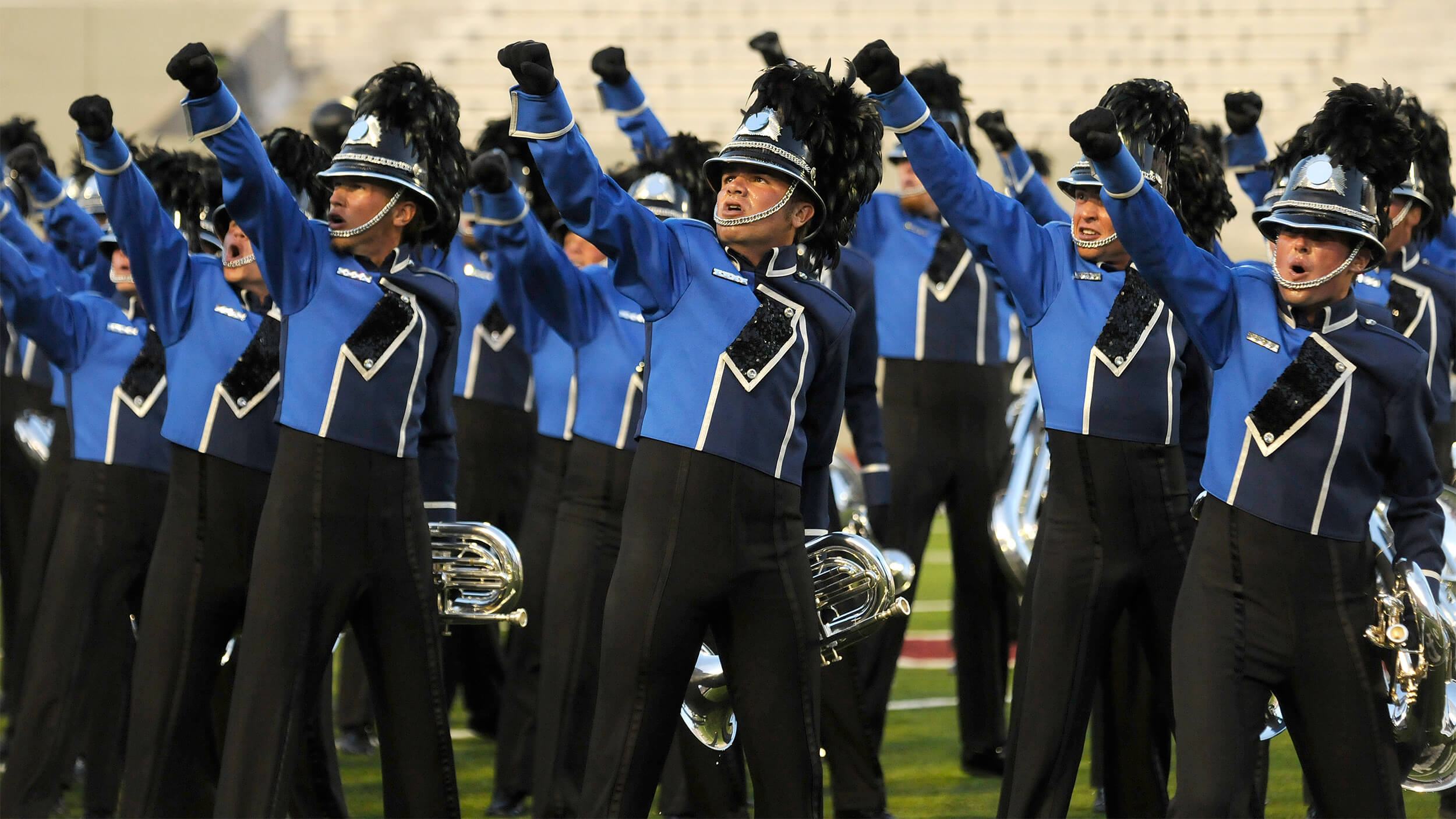 "The Knockout" earned the 2008 Bluecoats a TKO in the art of storytelling, following the challenges and struggles of a prizefighter attempting to work through his inner demons to achieve success in the boxing ring and in life.

The sixth-place show—filled with raw emotional energy—was a metaphor for not giving up, no matter how overwhelming the odds may seem.

Additional music came from Simon and Garfunkel's "The Boxer" and Leonard Bernstein's film score to "On the Waterfront," the 1954 Academy Award-winning movie by Elia Kazan that starred Marlon Brando as an ex-prizefighter-turned-longshoreman who struggled to stand up to his corrupt bosses. The soundtrack was Bernstein's only original film score not adapted from one of his popular stage productions. 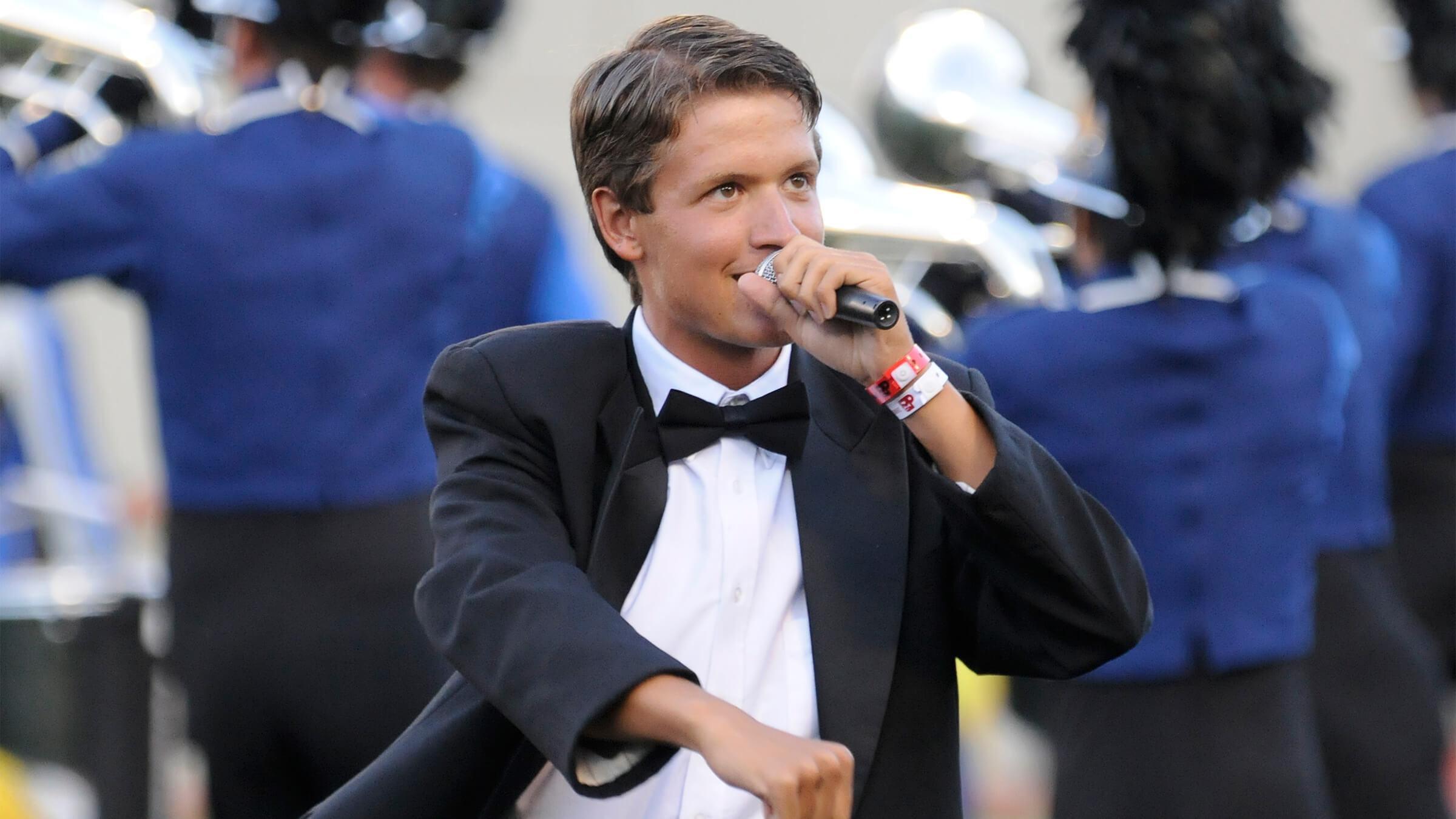 The show opened with a tuxedoed emcee pumping up the crowd while introducing the two boxers with grand superlatives as their trainers prepped them for the match. Visually two squares of brass players each encompassed one of the contestants.

The color guard performers wore training suits and their flags were all blue on one side with a black hole "punched through" the fabric. The other side of the flags was either yellow or red—matching the colors of the trunks of the two boxers—with the same black hole punched through from the opposite side.

The show proper started with the main theme and the vigorous "Presto Barbaro" from "On the Waterfront." The red and yellow sides of the flags quickly alternated as each fighter momentarily took control, ending with the yellow-trunked champion knocking out the red-trunked contender and the horns finishing the piece with arms raised in a still image of a stiff left upper cut.

To quiet echoes of the previous piece, the announcer, his voice trailing off as if barely heard by the nearly unconscious fighter, counted down from 10 as the challenger struggled to get himself off the mat. 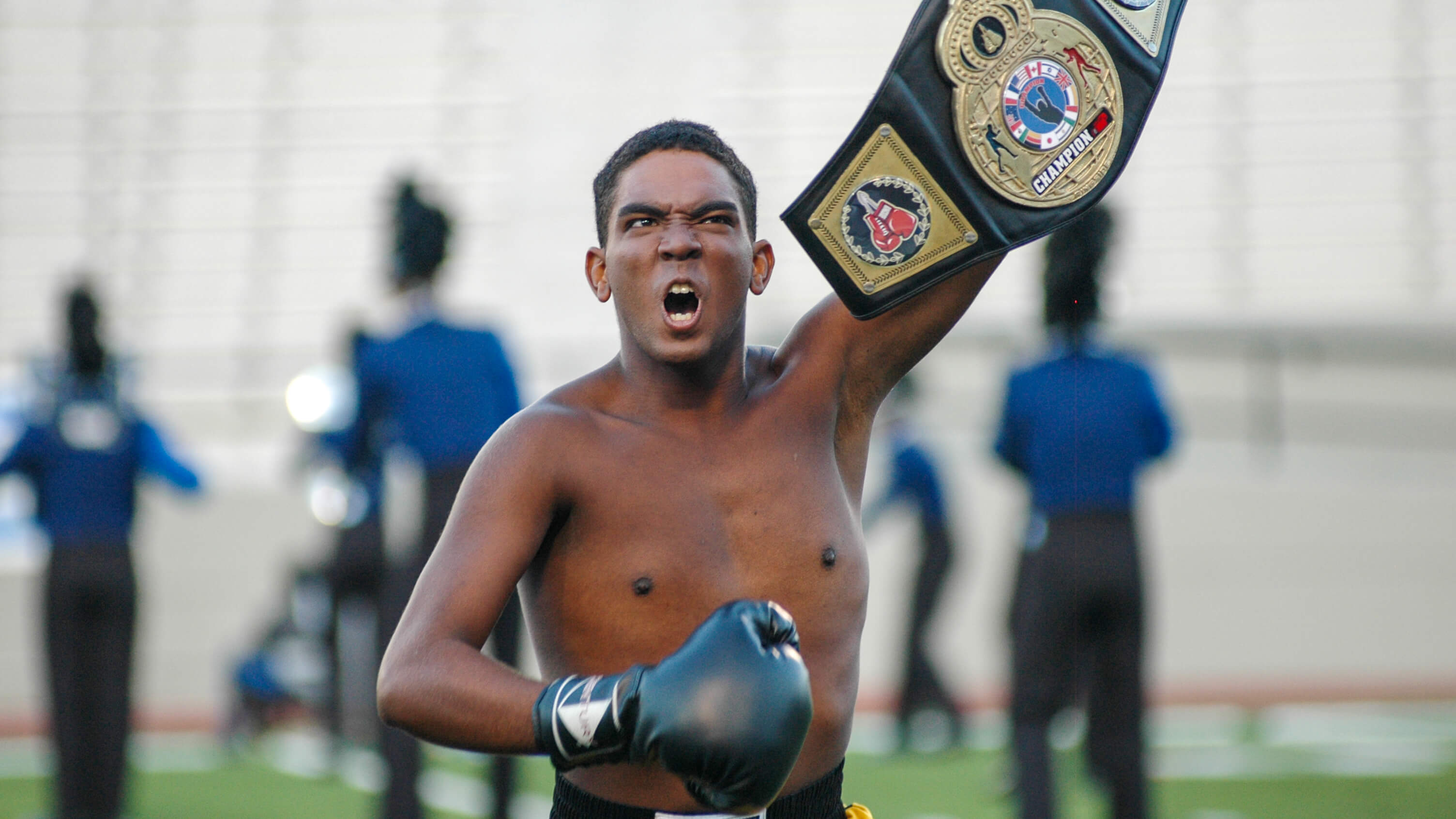 The champion was presented the title belt and the announcer tried to help the vanquished challenger out of the ring, but the boxer broke free and pantomimed the moves that may have won him the match, with the same moves copied by the color guard. This was done to an elegiac interpretation of the main theme from "Rocky," as a spot-on impression of the film's trainer Mickey Goldmill (played by Burgess Meredith) provided encouragement.

The contender then went through a routine of jabbing at an imaginary punching bag while five bass drummers replicated the sound of the bag, leading into a brief statement of "Eye of the Tiger." During the following drum feature, the voice of the trainer returned to instruct the challenger at an unseen punching bag, with several members of the color guard up front following his commands at actual punching bags.

A loud heartbeat of desolation emanating from a concert bass drum opened the reflective "Love Theme" from "On the Waterfront," the contender searching for inner strength to go along with his increased physical prowess in the ring. 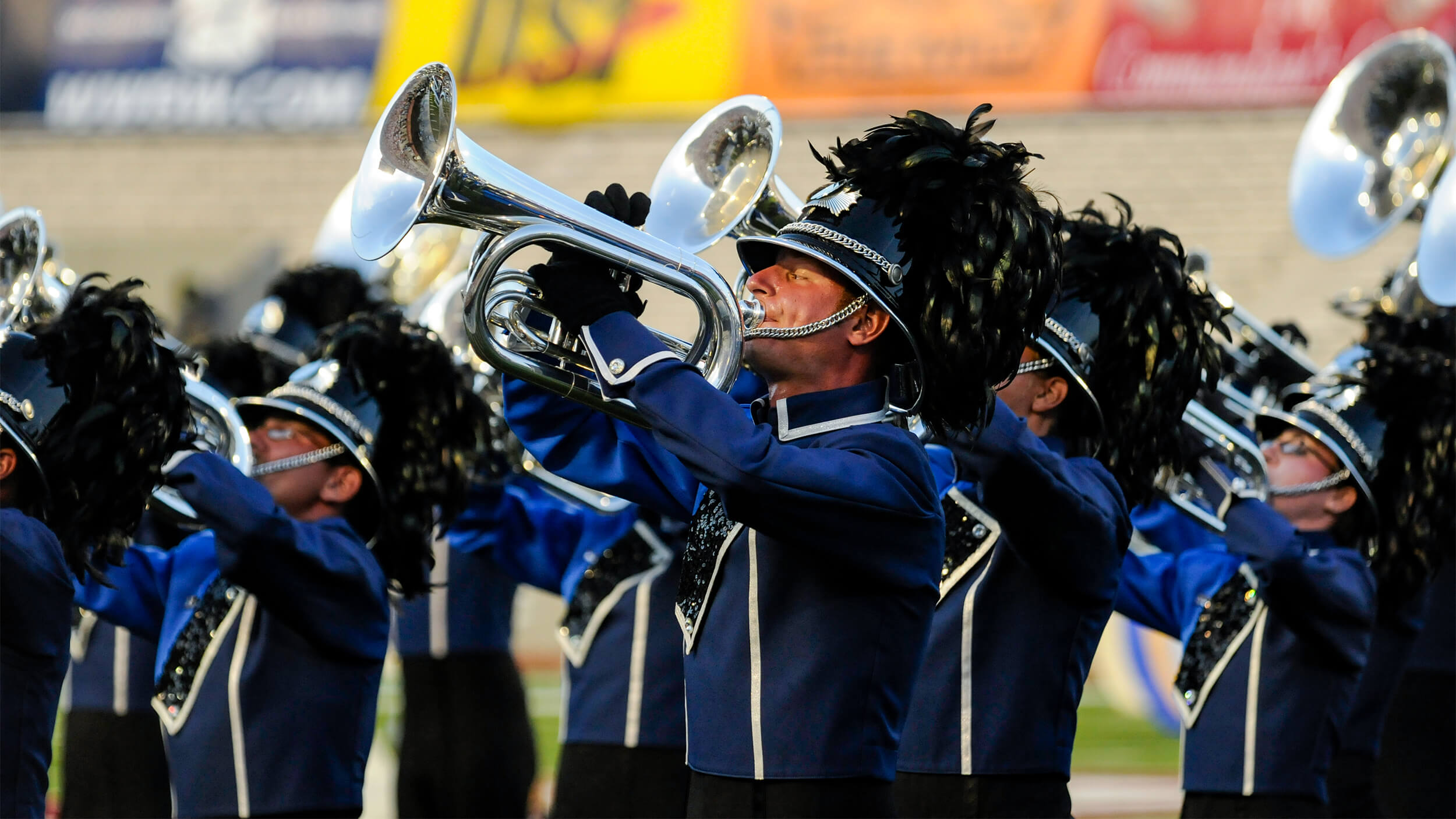 Next, the soul of the entire production, "The Boxer," started with a haunting soft chorale version of the Simon and Garfunkel tune that portrayed the loneliness of the struggle to survive in one's chosen field. This led into one of the great moments of the year, the searing brass-only blast of the beginning of the final stanza of the work.

Chilling in its intensity, this unforgettable segment captured the raw emotional power of the following lyrics: "In the clearing stands a boxer/And a fighter by his trade/And he carries the reminders/Of ev'ry glove that laid him down/Or cut him till he cried out/In his anger and his shame…"

Then, as the stunned audience was still reveling in the magnificence of this most glorious moment, the corps sang a cappella, "I am leaving, I am leaving/But the fighter still remains," as the contender raised his arm in a statement of triumph over his fears and inner torments. 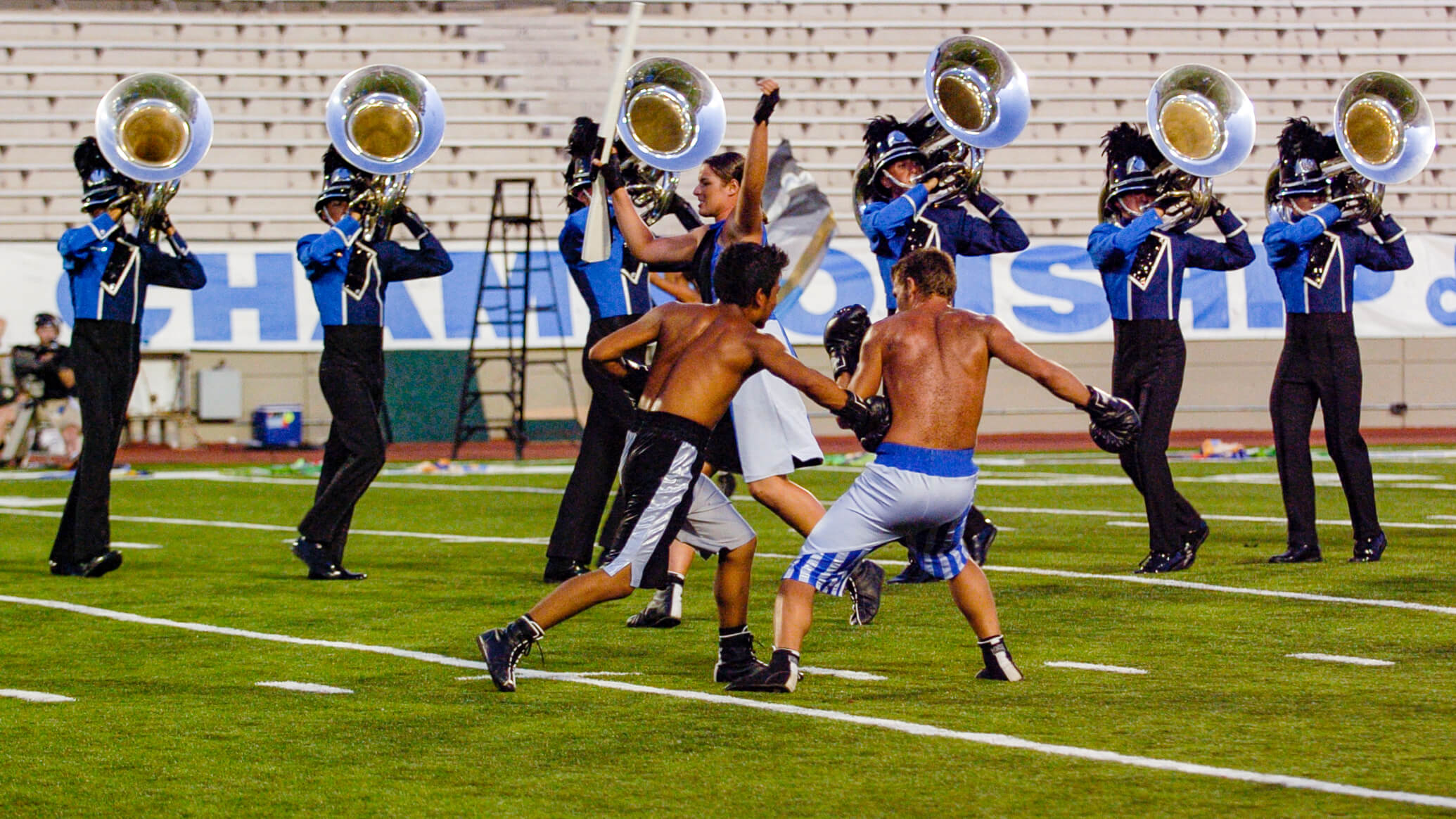 The challenger then got the opportunity for another try at the title as the "Main Theme" from "Rocky" revved up the fans in the arena. Initially, the challenger took a tumble to the floor, with the trainer shouting at him to get up. Jumping to his feet and delivering a knockout blow to his opponent, the challenger finally achieved his moment of glory.

After running toward the front of field with his championship belt, the new victor thumped his chest and mouthed, "It's mine!"

The brass section proclaimed a final scream of acclamation and the show ended with the new champion and horn line members thrusting their arms into the air in celebratory joy, amidst the rousing approval of the screaming fans.