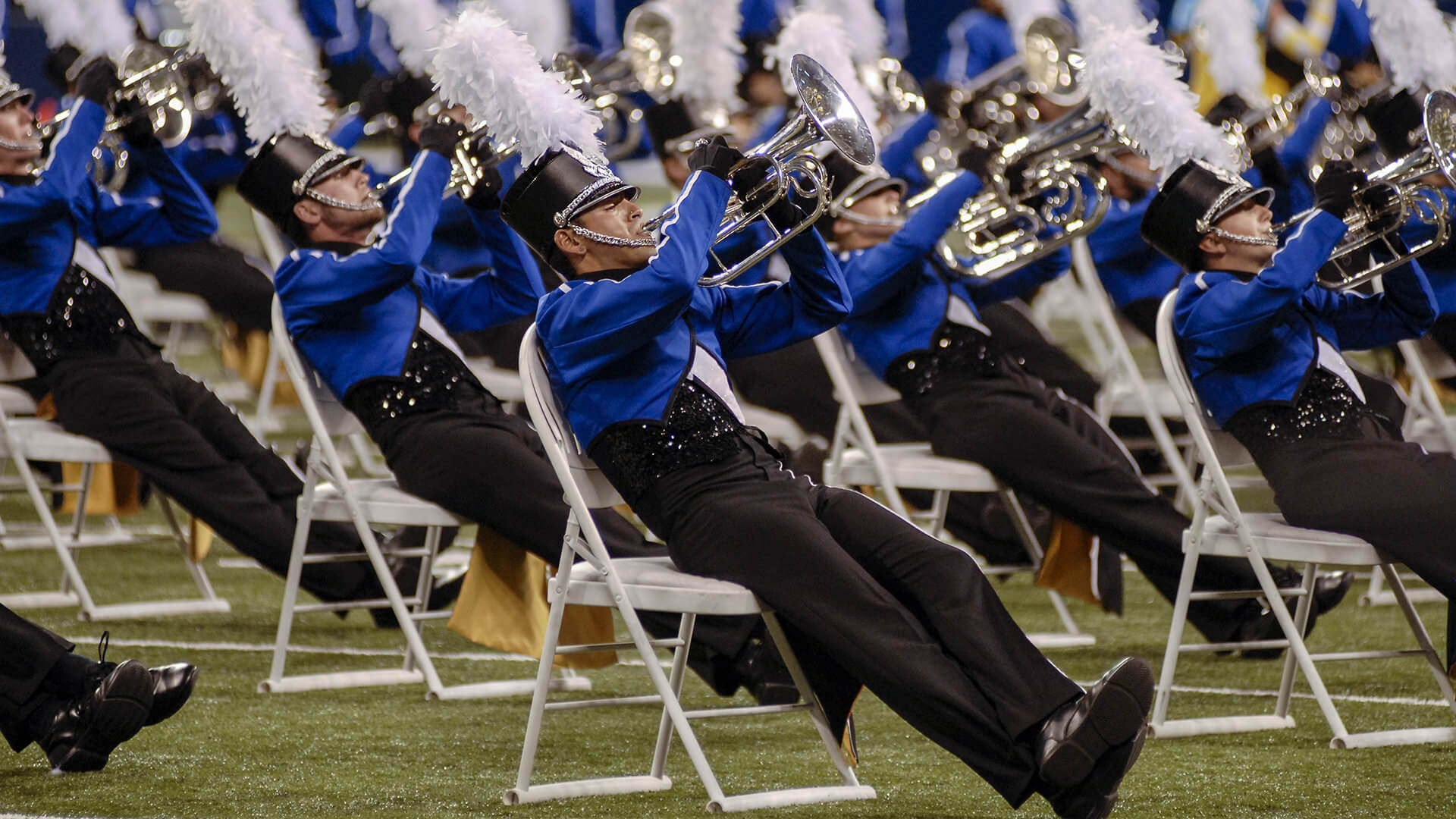 Marking the organization’s 75th anniversary, the Cadets changed its name to Holy Name Cadets, the corps’ first moniker. For the sixth decade in a row, the corps played something from “West Side Story.”

Santa Clara Vanguard’s score of 95.650 set a record high for a fifth-place corps. It stood until Vanguard broke the record again with a 95.900 score in 2015. Other headlines included the Troopers making the Finals competition for the first time since 1986, and the Blue Devils enjoying an undefeated season and earning the corps’ 13th DCI World Championship title. 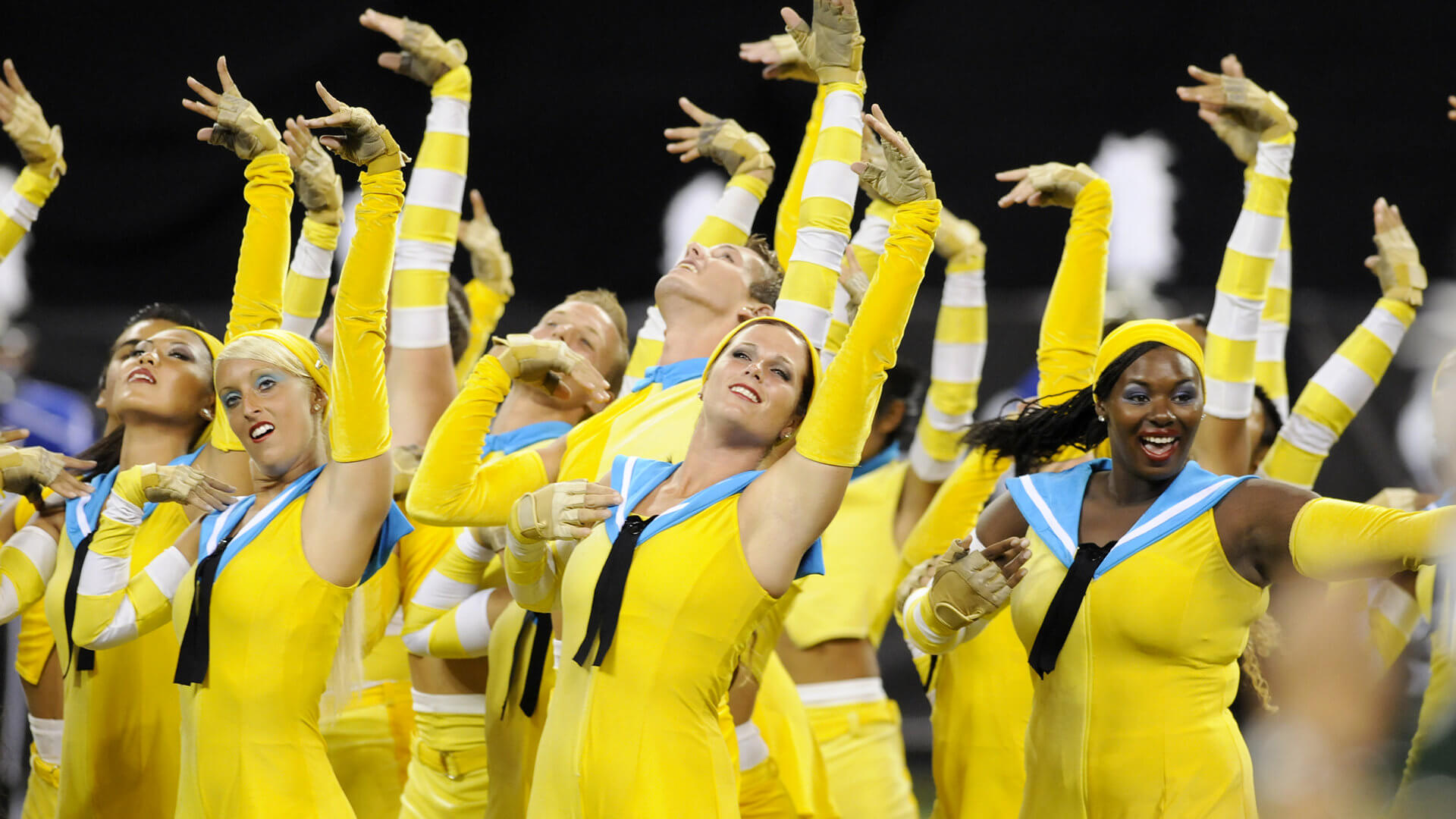 The Devils’ production, “1930,” focused on the challenges of the first full year of the Great Depression after the 1929 stock market crash. The show was divided into four parts, “Mosaic,” “Depression,” “King of Jazz,” and “Hope.”

The corps set the theme by taking audience members back in time with a radio spot for Velveeta, the processed cheese product vigorously promoted by Kraft Foods after they bought the product in 1927.

The opening “Mosaic” segment followed, painting a picture of what life was like in the United States during 1930, commencing with Harold Arlen’s “Get Happy,” introduced in “The Nine-Fifteen Revue” Broadway musical of 1930. It was Arlen’s first musical hit. He went on to write a number of popular tunes including “Blues in the Night,” “Stormy Weather,” “That Old Black Magic,” and “Over the Rainbow,” all of which have been widely performed by drum corps over many years.

As the corps entered the field, a muted trumpet soloist performed up front while the bright yellow-attired color guard members moved in between a number of white folding chairs that were set up in a block formation on the right side of the field. Mellophone and trumpet soloists provided snippets of “Fascinating Rhythm” and the theme to “Rhapsody in Blue.”

The next segment of “Mosaic” was marked with “Playing Love” by Ennio Morricone, written in 1998 as the first song for the soundtrack to the film, “The Legend of 1900.” Color guard members broke out bright yellow flags that they spun while sitting on, standing on, and standing aside the chairs.

After the initial impact of the song’s melody, a drill formation featured “1930” in an art deco script. For the climax of the piece, brass players marched into the section of chairs, sat down, and let loose with “Happy Days Are Here Again,” composed in 1929 by Milton Ager and featured in the 1930 film, “Chasing Rainbows.” It became the theme song of Franklin D. Roosevelt’s successful presidential campaign in 1932, helping inspire hope for the future.

The second segment of the show, “Depression,” started with Aaron Copland’s “Piano Variations” of 1930, originally written for piano and later transcribed in 1957 as “Orchestral Variations.” This came from the composer’s abstract period and was described as “new, strange, dissonant, stark, bare, and disconcerting.” Leonard Bernstein stated he adored the piece, referring to it as being “hard as nails." He claimed to play it at parties to “empty the room, guaranteed, in two minutes.” But he further claimed it was, “a synonym for modern music—so prophetic, harsh and wonderful, and so full of modern feeling and thinking.”

At the start of the Copland piece, Blue Devils brass players made a giant dollar sign drill formation, reminding all that the Great Depression, for the most part, caused millions to have to survive with next to no money. The corps members reset the chairs elsewhere as the color guard performers, all with rifles, came to the front and expressed the angular angst of the music. Due to its angry undertones, many audience members found this segment of the show to be rather vexing, but it perfectly captured the descent into chaos and hopelessness that plagued the nation during the early days of the Great Depression. 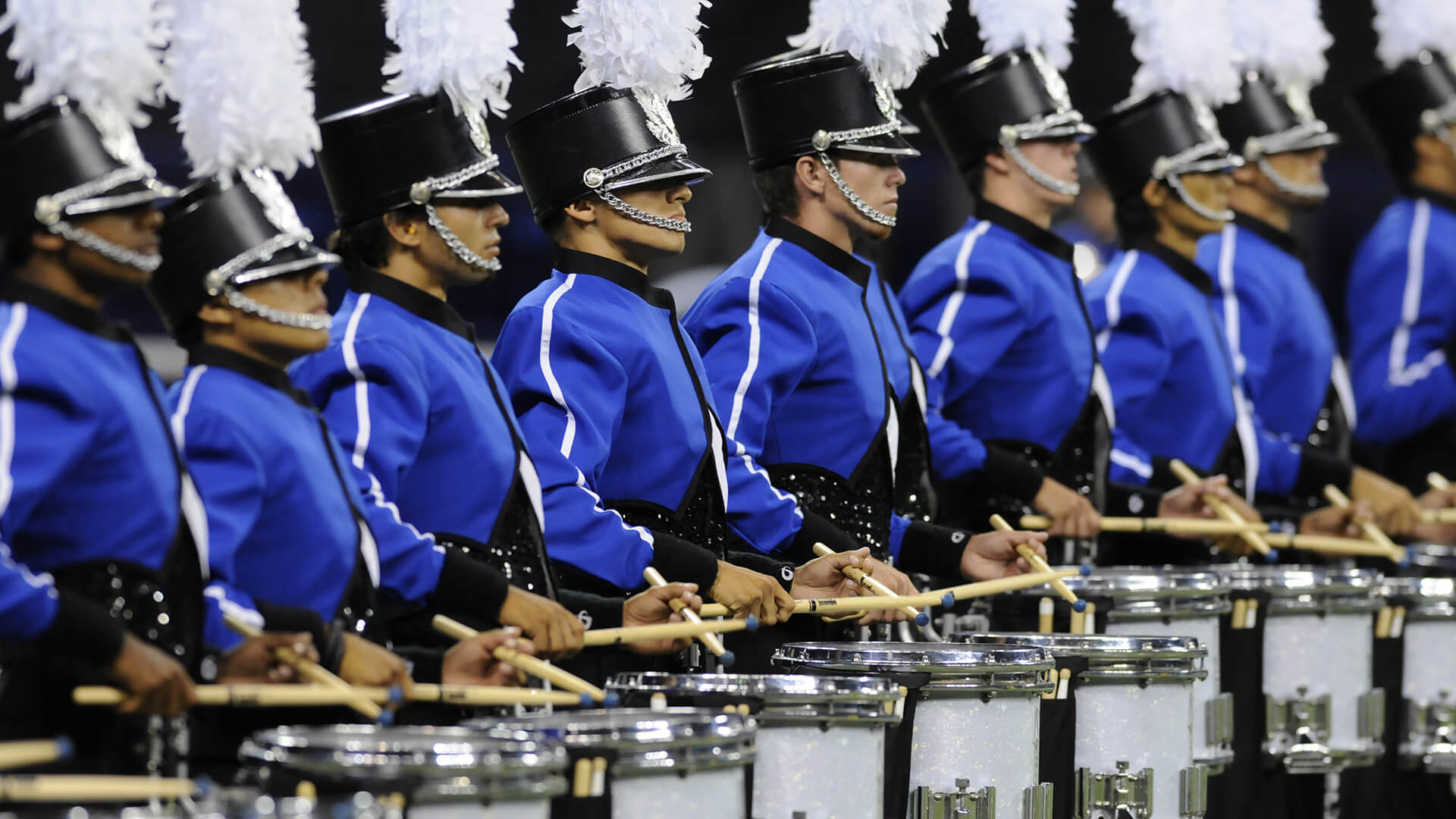 2009 Blue Devils
The prop chairs were then moved again to the back of the field, serving as a brief place of respite performers. The piece ended with a cataclysmic intensity that seemed to suggest there was little hope.

George Gershwin composed the following three selections. Along with his brother and lyricist, Ira Gershwin, he created a mountain of famed Broadway tunes that went straight to the top of the pop charts. Wanting to improve his compositional skills, he sought to study with famous composers and composition teachers such as Maurice Ravel, Igor Stravinsky, and Nadia Boulanger. All turned him down, each recognizing he had a unique talent and that he must find his own “voice.”

The first Gershwin tune opened up the section titled, “King of Jazz.” “Rialto Ripples” was a delightful novelty rag written in 1916 when Gershwin was just 18 years old. It was the composer’s only piano rag and his first published instrumental piece. Performed solely by the front ensemble percussion section for the first half, the second half brought in the drum line, with some snare drummers playing atop the white chairs.

2009 Blue Devils
Next up was “I Got Rhythm” from the 1930 musical, “Girl Crazy,” originally written for an earlier musical named “Treasure Girl.” A drum set introduced the piece, which then went into the type of unrestrained jazz most associated with the corps during its first few decades. The mood of the entire show changed as it was realized that happy days were indeed here again. The corps “brought it home” at the end of the piece, turning the field into a feel-good festival of blaring jazz.

Gershwin’s music continued as the first selection in the section titled, “Hope.” He wrote “Piano Concerto in F” in 1925, one year after he penned “Rhapsody in Blue.” The concerto, originally titled, “A New York Concerto,” was the first large-scale work to be fully orchestrated by Gershwin.

Gradually, “1930” was formed on the field with the chairs in back of the brass players, who then replicated the form up front after first pouring their hearts into a triumphant restatement of Morricone’s theme from “Playing Love.” A little bit of “Rhapsody in Blue” brought the show to a rousing conclusion, putting an exclamation mark on the corps’ undefeated season.