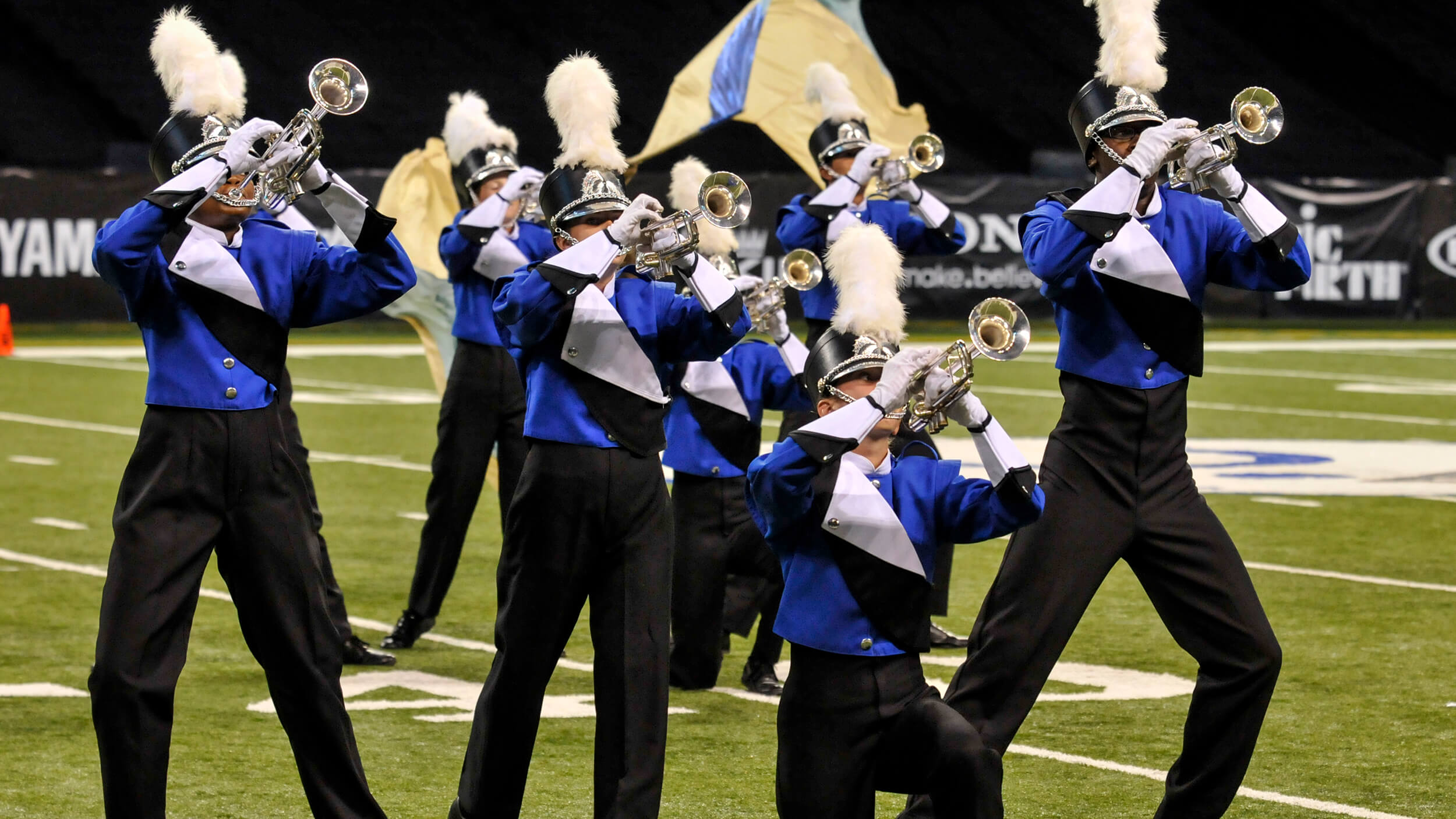 Blue Devils B won the 2010 Open Class title by 3.55 points while capturing top scores in six of eight captions and winning the awards for Best Brass Performance, Best Percussion Performance, Best General Effect, and Best Visual Performance. The only award the corps didn’t win was for Best Color Guard, which went to Spartans.

Raiders first competed regionally in the east in 1991 and started attending the DCI World Championships in 1992. The corps won the Division III title in 2005 but placed eighth overall among all Division II & III corps. A fifth-place Open Class finish in 2010 made that season a banner year for the New Jersey corps, especially since it was also Raiders’ 20th anniversary. 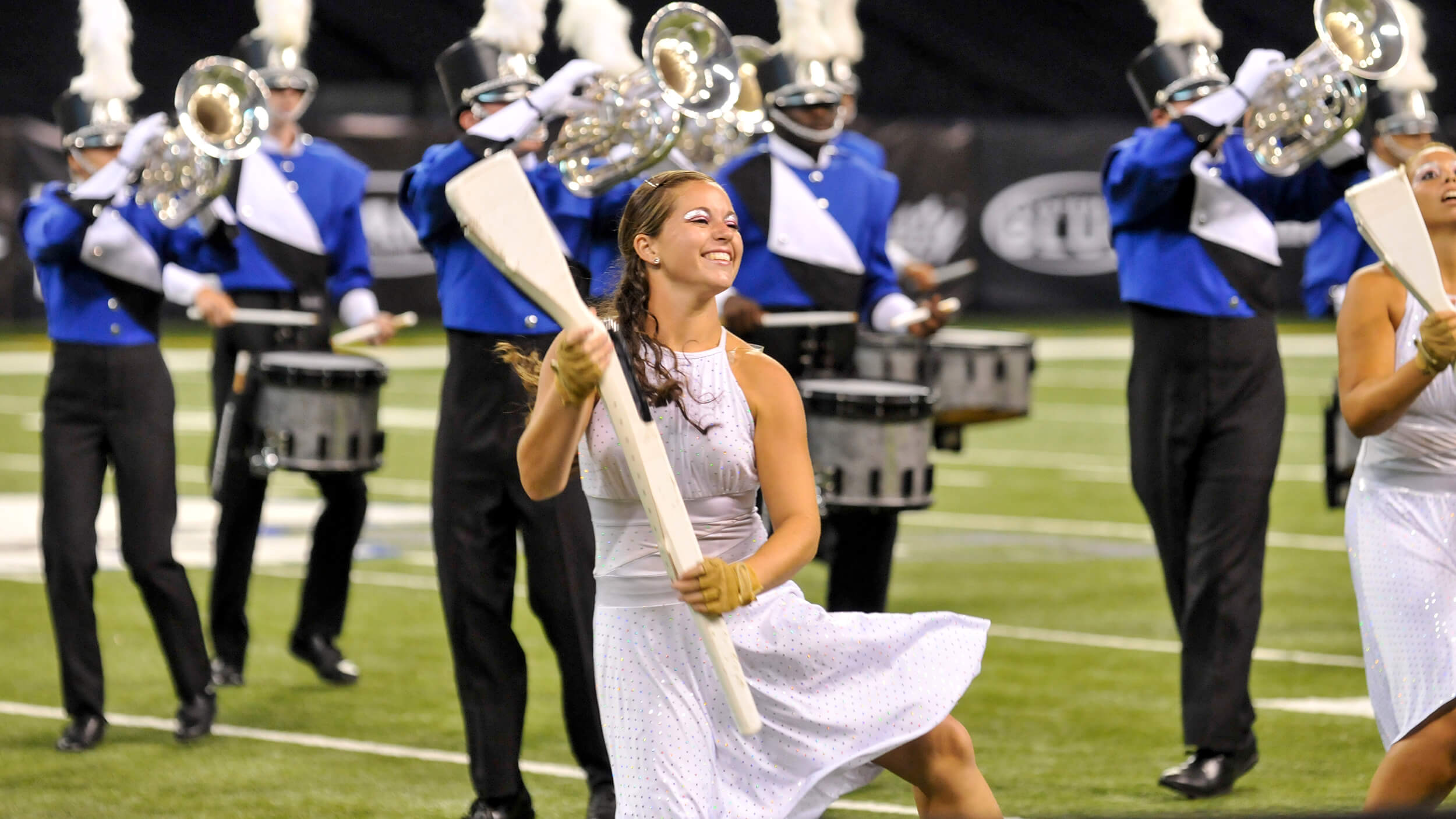 The corps’ 2010 show was titled, “Platinum Celebration.” The first thing fans noticed when the corps set up on the field was its relatively small size; 26 in the horn line, 14 in the battery percussion, eight in the front ensemble, and seven in the color guard. Perhaps the second thing fans noticed was when the corps started to play, size didn’t seem to matter, as the Raiders’ spunk outshone its relatively diminutive appearance.

The production opened with “Celebration Fanfare,” an original work by Michael Hamilton written for the corps in his last season as brass arranger and program coordinator. He had marched as a member of the corps several years earlier. Color guard flags of various hues of gold opened the show and gave way to rifles as the next selection took over.

That selection, “Exultate” by Samuel Hazo (pronounced ex-ull-TAH-tay), was commissioned in 2001 by Pittsburgh’s Duquesne University School of Music to serve as the finale for the installation of the university’s incoming president. While many are familiar with Hazo’s music, being that he’s one of the most successful composers for concert band, many in drum corps may not know that he used to run DCI’s summer contest in Pittsburgh and as such, was no stranger to the activity.

“Exultate,” like much of Hazo’s music, seamlessly blended rhythmic pop influences with serious symphonic strains, creating a unique style popular with musicians and listeners alike. The color guard performers picked up solid white flags for the last segment of the piece, complementing the solid white of their dresses.

Next came “Exhilaration” by Larry Clark which was originally written in 2009 as a concert band overture, full of woodwind flourishes and brass fanfares. Raiders’ rendition started with the second section of the piece, a calm and quieter offering than what opens and closes the piece in a concert hall. A front ensemble interlude took the woodwind parts and turned them into a lovely, twinkling ballad that was as soothing as it was beautiful, accompanied by the color guard spinning large cream-colored double flags.

Peter Boyer’s “New Beginnings” was written for the Kalamazoo (Michigan) Symphony Orchestra to celebrate the 2000 opening of the new Bronson Methodist Hospital campus in downtown Kalamazoo. Vanguard Cadets played the piece in 2004 and Legends, a corps from the same hometown as the hospital, played it in 2008. 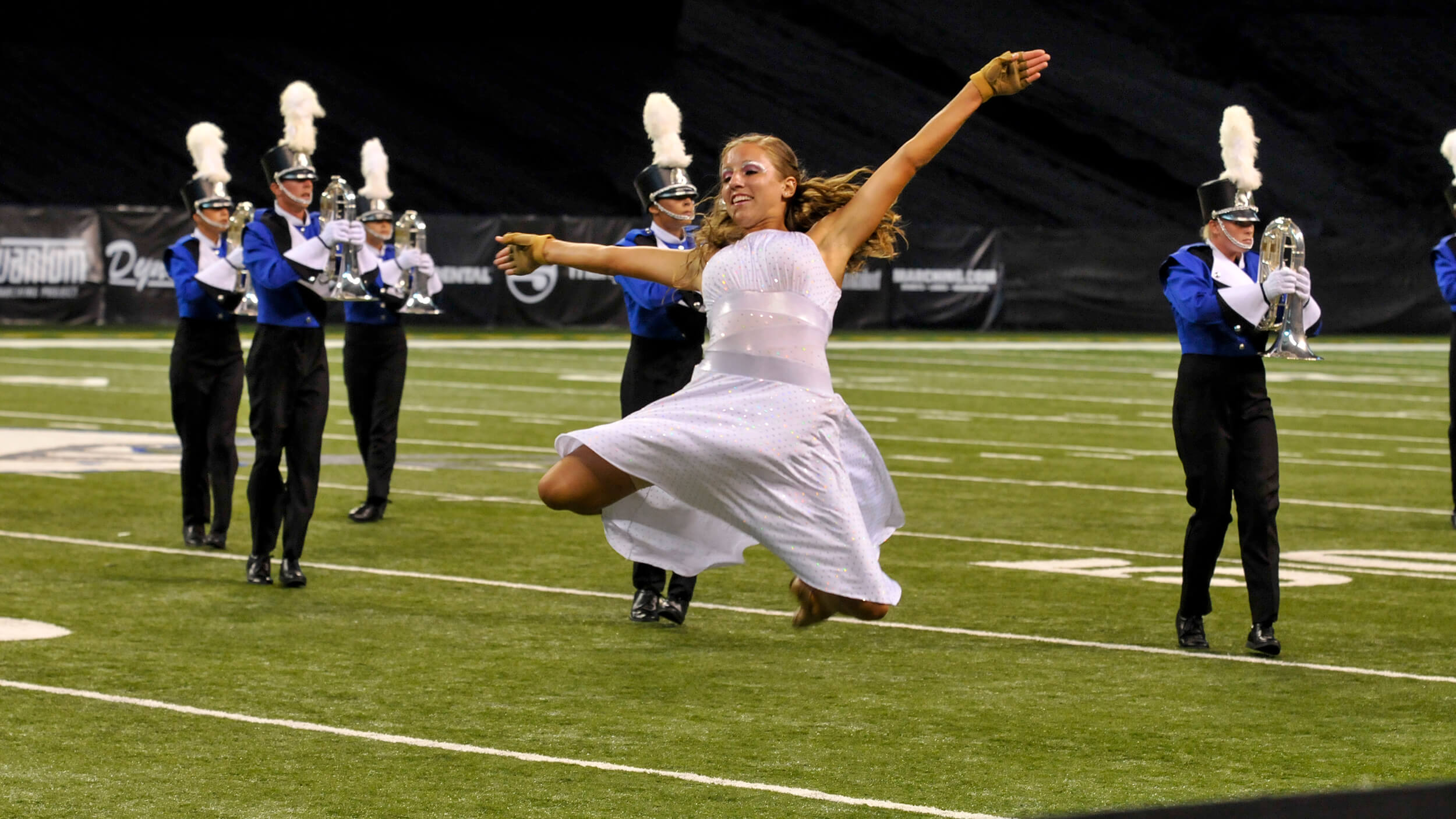 Raiders started the piece during the final segment of the show, a driving assemblage of fanfares and impish upper voice interruptions that started with mallets introducing the selection about nine minutes into its original version that runs just over 11.5 minutes.

Bright orange and yellow flags were far more colorful than anything utilized earlier by the color guard, so the silks’ sudden appearance never failed to make the audience’s eyes pop open.

Like the rest of the show, this was a musical selection that perhaps shouldn’t have been considered for such a small corps, but as the corps’ high placement clearly proved, it was a piece the corps’ fearless members were more than eager — and ready — to tackle and nail down.