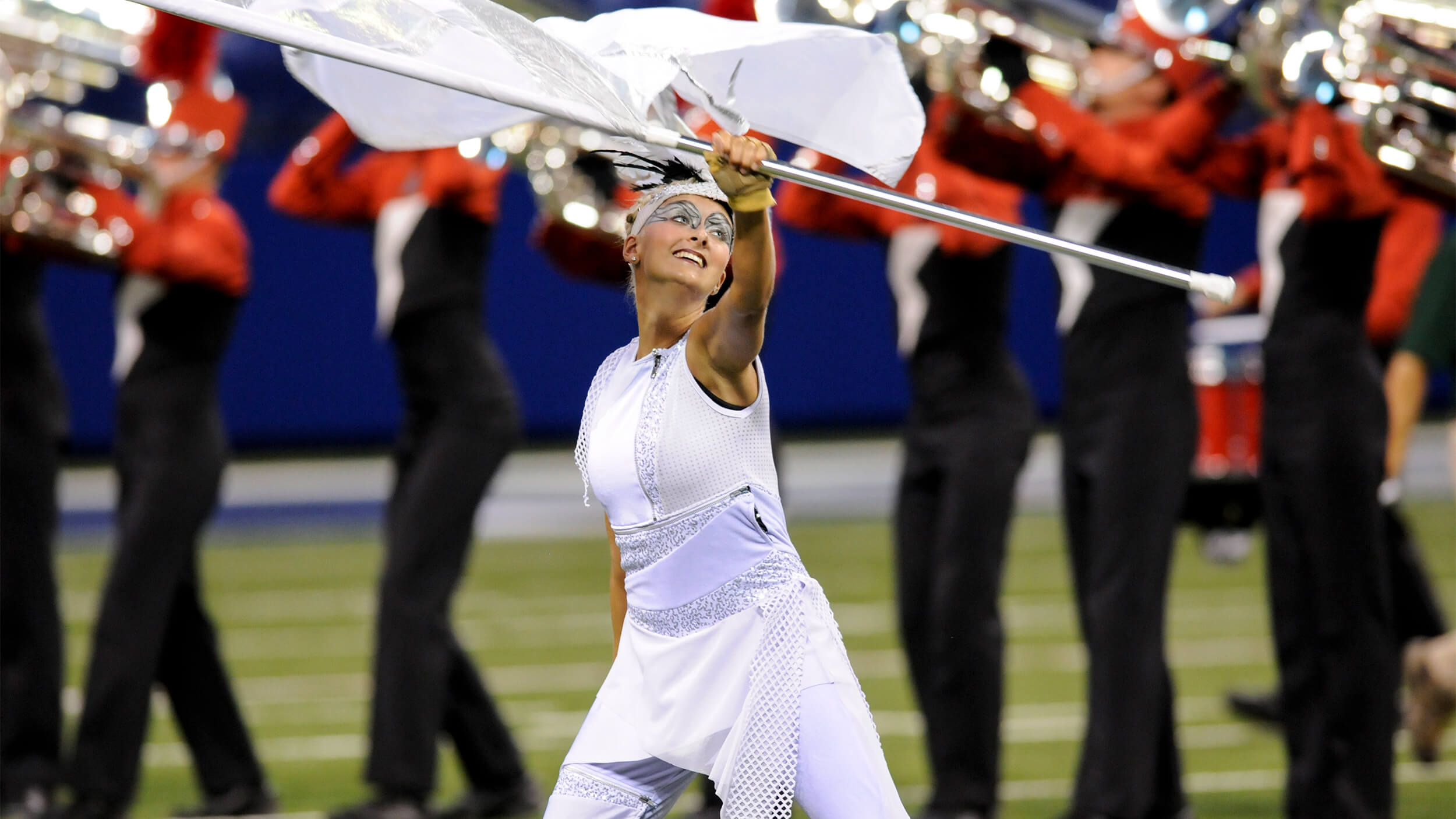 Capitalizing on the popularity of the film “Black Swan” released the previous fall starring Natalie Portman and Mila Kunis, Colts constructed their 2011 production, “Deception: The Jagged Edge” with thematic elements of the ballet-themed psychological thriller in mind.

The corps billed the production in its pre-season publicity materials:

Inspired by Pyotr Ilyich Tchaikovsky's epic ballet "Swan Lake," and Darren Aronofsky's mesmerizing Academy Award-nominated film, "Black Swan," the Colts present our own tale of deception about the jagged edge between innocence and the dark side within.

The corps also borrowed a quote from New York Times journalist Terrence Rafferty in its show synopsis to describe the “jagged edge” as “a feeling all performers are familiar with, the spooky sense, when you're in full flight, that you've crossed over into the dark territory of dream, or fairy tale, somewhere you haven't seen before. It's the exhilaration of losing yourself, and the fear of being lost to yourself forever." 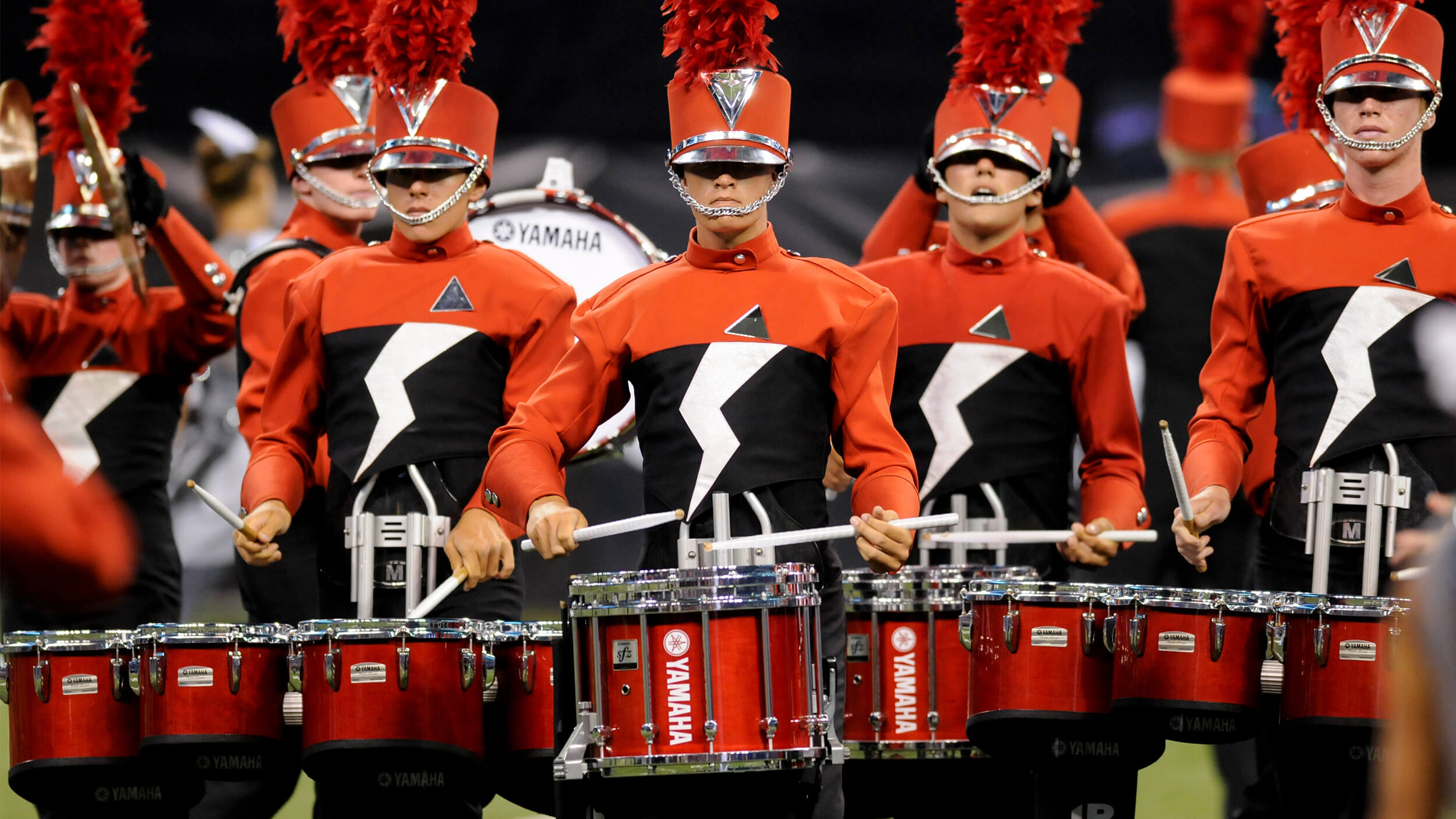 Thematically built around “white swan” and “black swan” characters played by color guard members, the production portrayed a constant push and pull between the two performers as they brought us to the sometimes scary edges of creativity while overall the corps uncovered deception to ultimately find truth and beauty.

Colts took the field in 2011 in their traditional base uniform consisting of a red and black top with mirrored triangle badge. However, it was updated from previous years with a shimmering-white lightning bolt design element set against black running down the center from chest to stomach. Black pants and shoes and red shakos with silver accents and red plumage completed the fresh but familiar look for the Iowa corps. Color guard members wore sleeveless form-fitting jumpsuits that incorporated sequins and swaths of white, gray, silver and black materials in various patterns.

During the corps’ pre-performance setup, the front ensemble percussion section set the theme of the production, playing a dreamy music box-like rendition of the main theme from “Act II, Scene 1” of the score to Tchaikovsky’s “Swan Lake” ballet.

The drums and horn line set the field in a 12x8 grid between the 20 yard lines. In the first bit of thematic deception of the show, all members of the color guard were hidden from view behind the stationary corps members, save for the white swan near the center mark of the 50-yard line.

This performer, dressed in an all-white version of the color guard costuming, completed a series of ballet tendus that then set the rest of the corps into motion. The front ensemble and drum line handled the first nearly minute of music as the color guard and brass sections marched through different formations as the percussion built anticipation with the driving musical motif.

Finally the brass entered with a series of sweeping chords, creating their own bit of auditory deception spinning from the front to the back. The doppler-like effect left the audience wondering if and when they’d hear the payoff of an opening melodic statement.

They wouldn’t have to wait long, however, as the brass formed a shallow wave formation and turned to the front to release a loud and powerful statement of the “Swan Lake” melody previously heard at top of the production. Just prior, the white swan came in front of the line with a white flag, ushering in the full color guard flag ensemble in unison with the horn line exclamation. 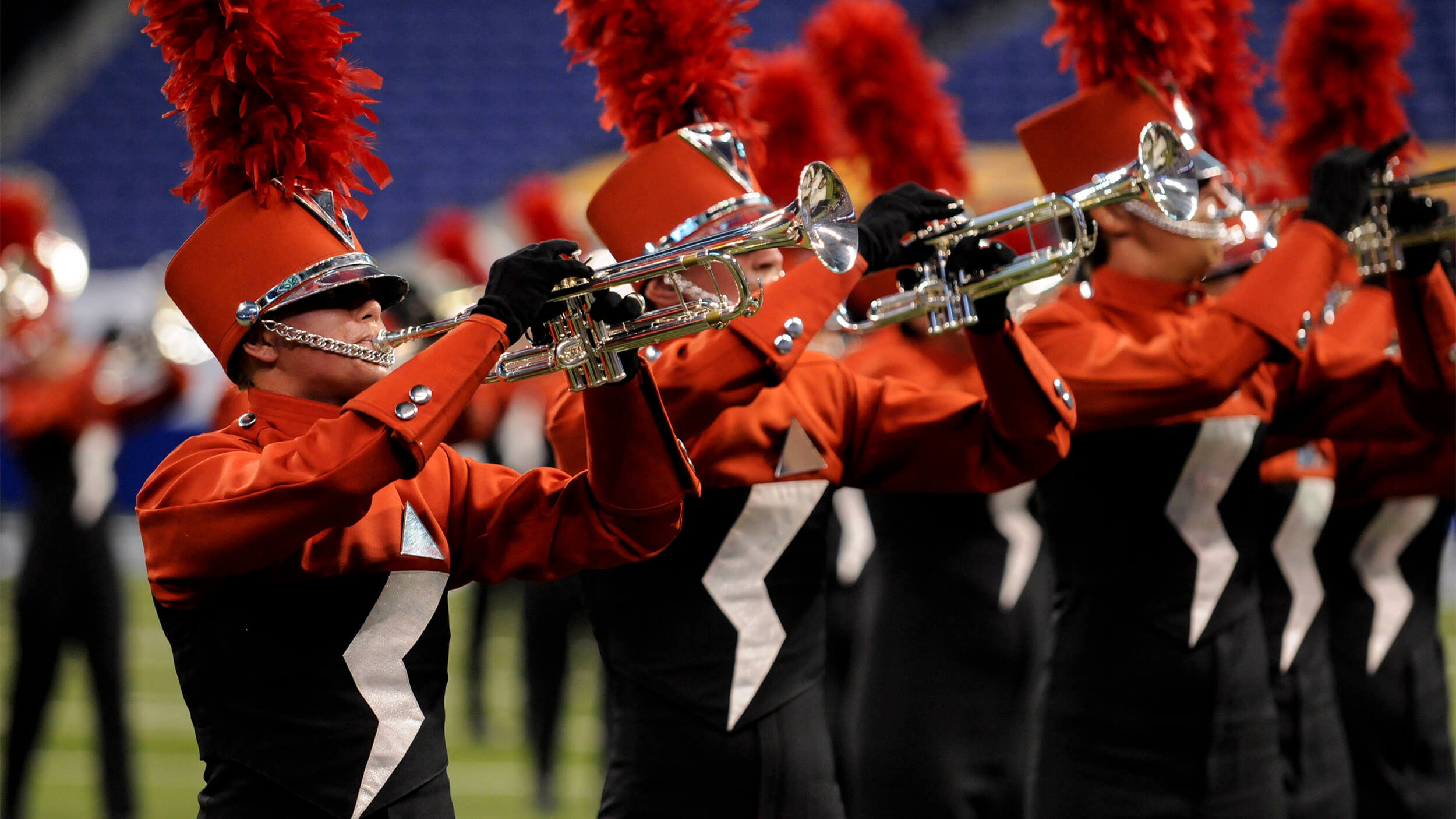 A trumpet soloist picked up the melody as the horn line condensed into a jagged line formation similar to the lightning bolt on the front of their uniforms before belting out another commanding statement of the Tchaikovsky melody to finish off the opening tune.

Quickening the tempo, Colts transitioned to American composer Nancy Galbraith’s 1991 composition “Danza de los Duendes.” It had its North American premiere by the Pittsburgh Symphony Orchestra in 1992. The Pittsburgh Press reviewed the piece saying, “Galbraith has penned a score of a bright allure, its minimalist touches deftly applied and its energetic personality balanced by lyrical finesse.” The work, whose title refers to mischievous goblin creatures of South American folklore, had previously been performed on the Drum Corps International stage by the Glassmen in 2003 and the Madison Scouts in 2008.

The piece offered the first appearance of the black swan, introduced with a high rifle toss on the 25-yard line of stage right. The character proceeded to lead the color guard rifle line as a foil to the white swan who led the flag line.

At the appearance of the black swan, the low brass carried the melody, trading off to the middle voices and then to the trumpets as the piece progressed. The horn line formed a brief company front on the field’s front hash mark leading to a percussion break that drew eyes to the black swan on the 50-yard line. The white swan, now sans flag, danced up the 50-yard line toward the back as the two characters mirrored their choreography separated by a line of brass players. 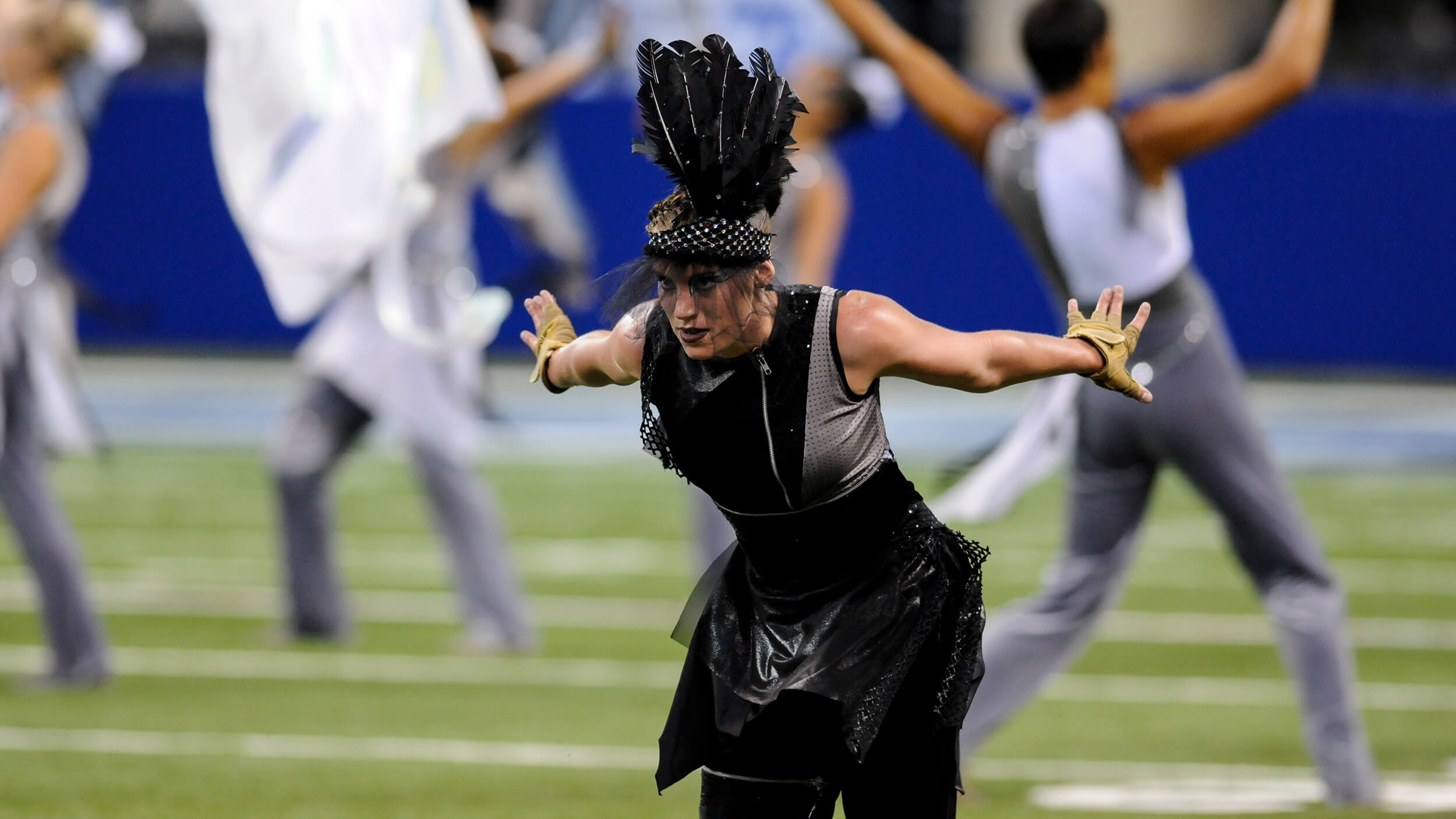 The corps next transitioned to a lyrical segment that featured Camille Saint-Saëns’ “The Swan” from what is arguably the French composer’s best-known work, “Carnival of the Animals.” A trumpet and mellophone duo kicked off the piece as the white swan gravitated toward the trumpet soloist surrounded by a circle of brass performing choreography from a prone position.

A baritone soloist picked up the lush melody while the rest of the horn line formed two pods in the shape of swan wings. The white swan danced in the center of the form on stage right while the black swan stayed on the outskirts.

Eventually the brass formed two arcs bisected by the color guard who brought the formation to life with a striking follow-the-leader display of spinning white and gray flags. As the flags continued to interweave, the audience saw the first signs of the black swan’s influence as the black-clad character aggressively pulled the white swan closer to her and stepped over her back as the horn line played a soaring chord. 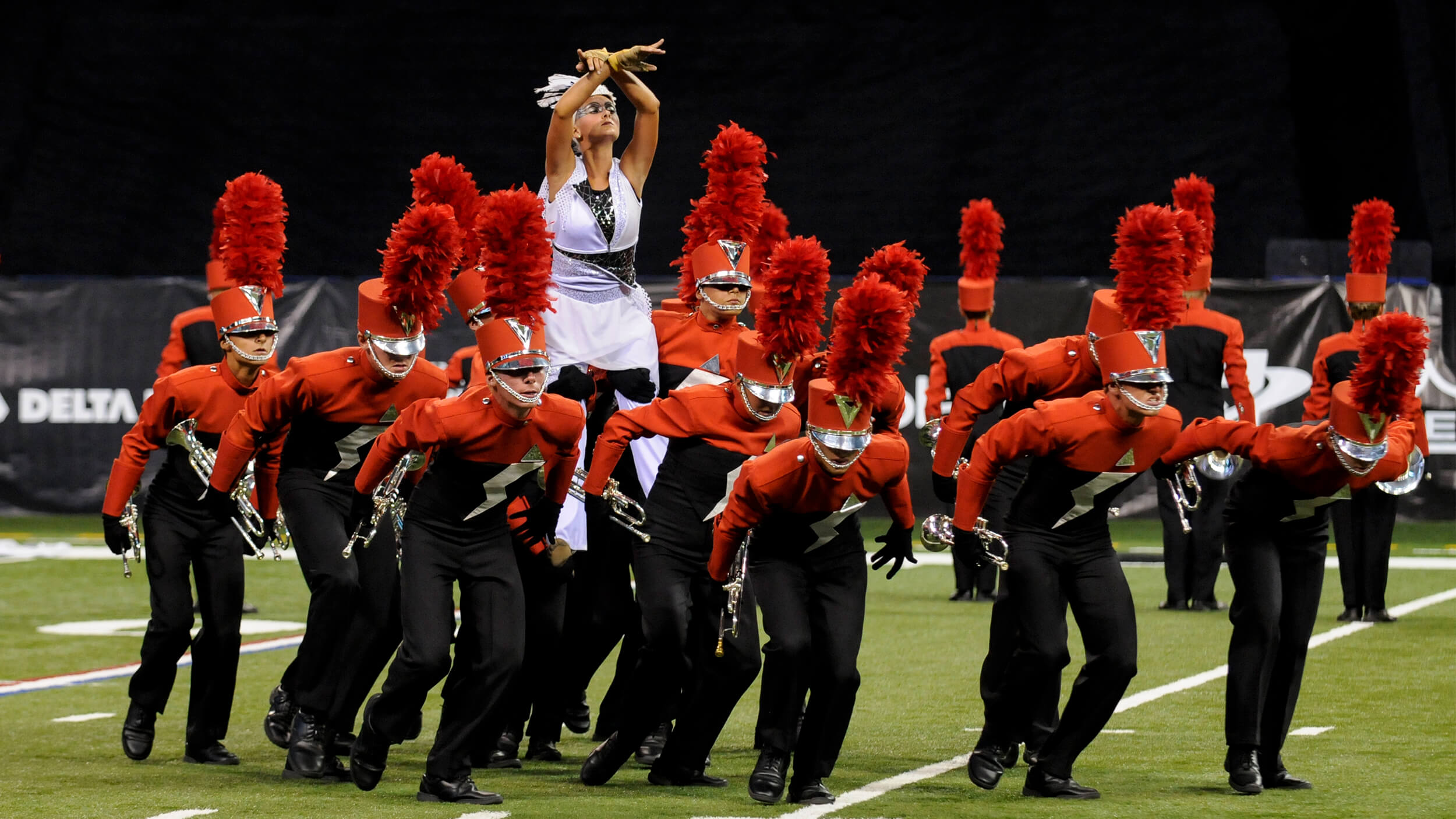 Closing out the segment, the baritone soloist reentered as the brass and percussion formed a jagged line across the back of the field. Meanwhile a pod of brass players on stage right near the 25-yard line formed up and lifted the white swan into the air. In a subtle costuming detail, we see the white swan moving ever closer to the dark, as what once was an all-white uniform now revealed swatches of black on the chest and midsection.

Adding an air of edge and uncertainty, the Colts next turned to the Zack Hemsey composition, “Mind Heist,” which achieved popularity in 2010 as the soundtrack to the trailer for the movie “Inception.” Colts’ arrangement started with an off-key interjection of the “Swan Lake” melody as the black swan once again led the rifle line while the white swan began to be isolated on the outskirts of the drill formations.

The color guard flag line also joined the black swan as the music transitioned back to the “Swan Lake” melody. The white swan however, reemerged as the sole performer in another wing-like drill formation as the black swan made a temporary exit off the front sideline. 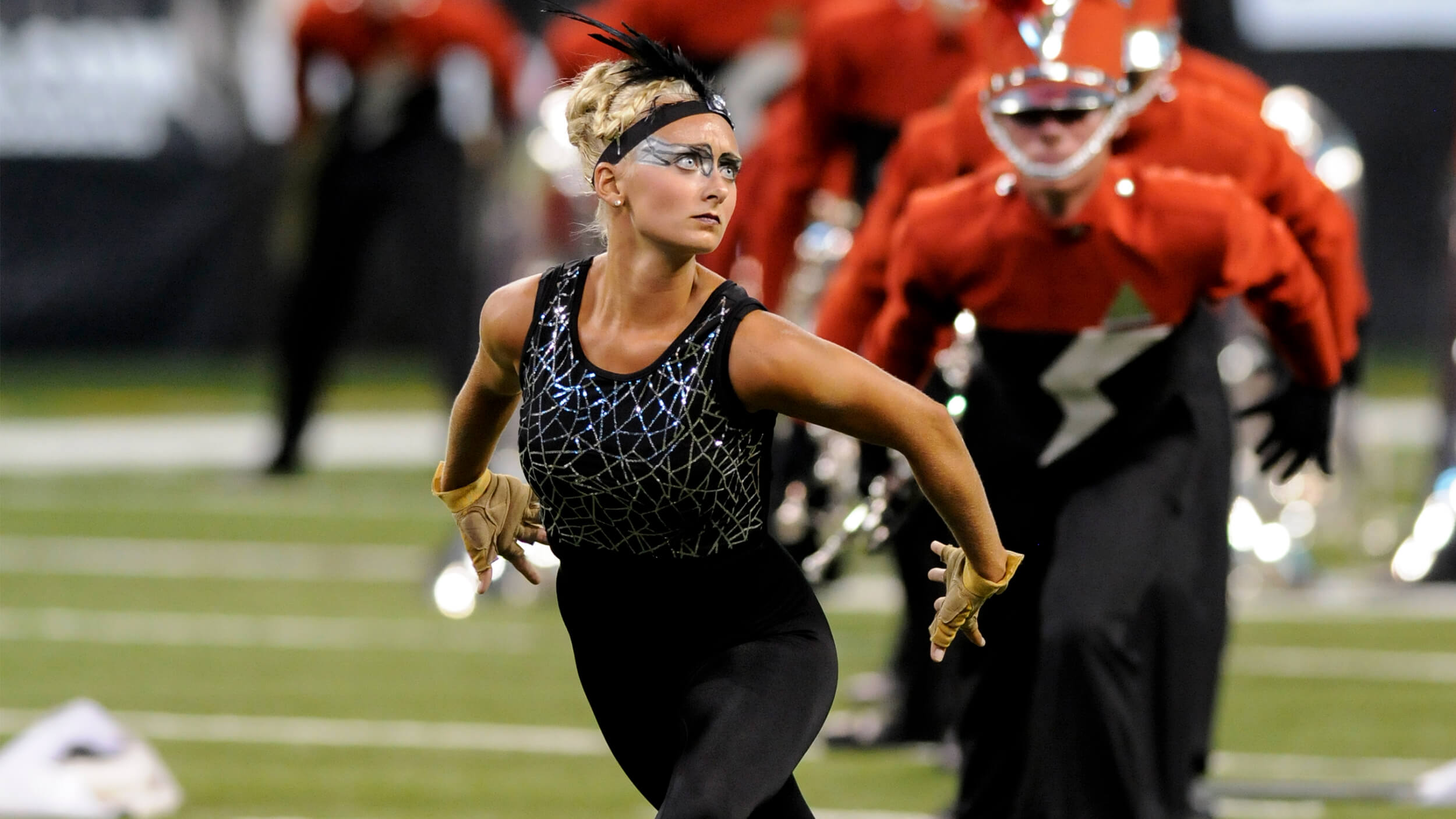 All seemed to be coming to a happy ending as the brass formed an arc across the field and the drum major turned to acknowledge the audience as if the end of the performance. However, this was yet another piece of deception. Colts added this part of the show during the final weeks of the 2011 DCI Tour, first performing it at the DCI Eastern Classic in Allentown, Pennsylvania.

"There is some new drill and a deceptive ending that goes along with our show title," Colts drum major Sam McGinthy said about the change in Allentown in 2011. "The corps forms a giant concert arc, and you think the show is over. I turn around and bow to the audience, but the corps keeps going."

Colts members began marching out in two lines toward the back corner of the football field. Meanwhile the black swan reemerged dancing with the white swan surrounded by a large circle of color guard performers.

The color guard members condensed into a pod just off the 50-yard line and lifted the black swan into the air. This gave one last opportunity for deception as the formation also served to obscure the white swan who was in the back making a quick costume change. Now clad in all black she was ejected from the pod to leave the audience wondering if the white swan was as innocent as we had thought her to be all along.

The ending also played to a Claude Debussy quote additionally included in the corps’ show synopsis, “art is the most beautiful deception of all.” 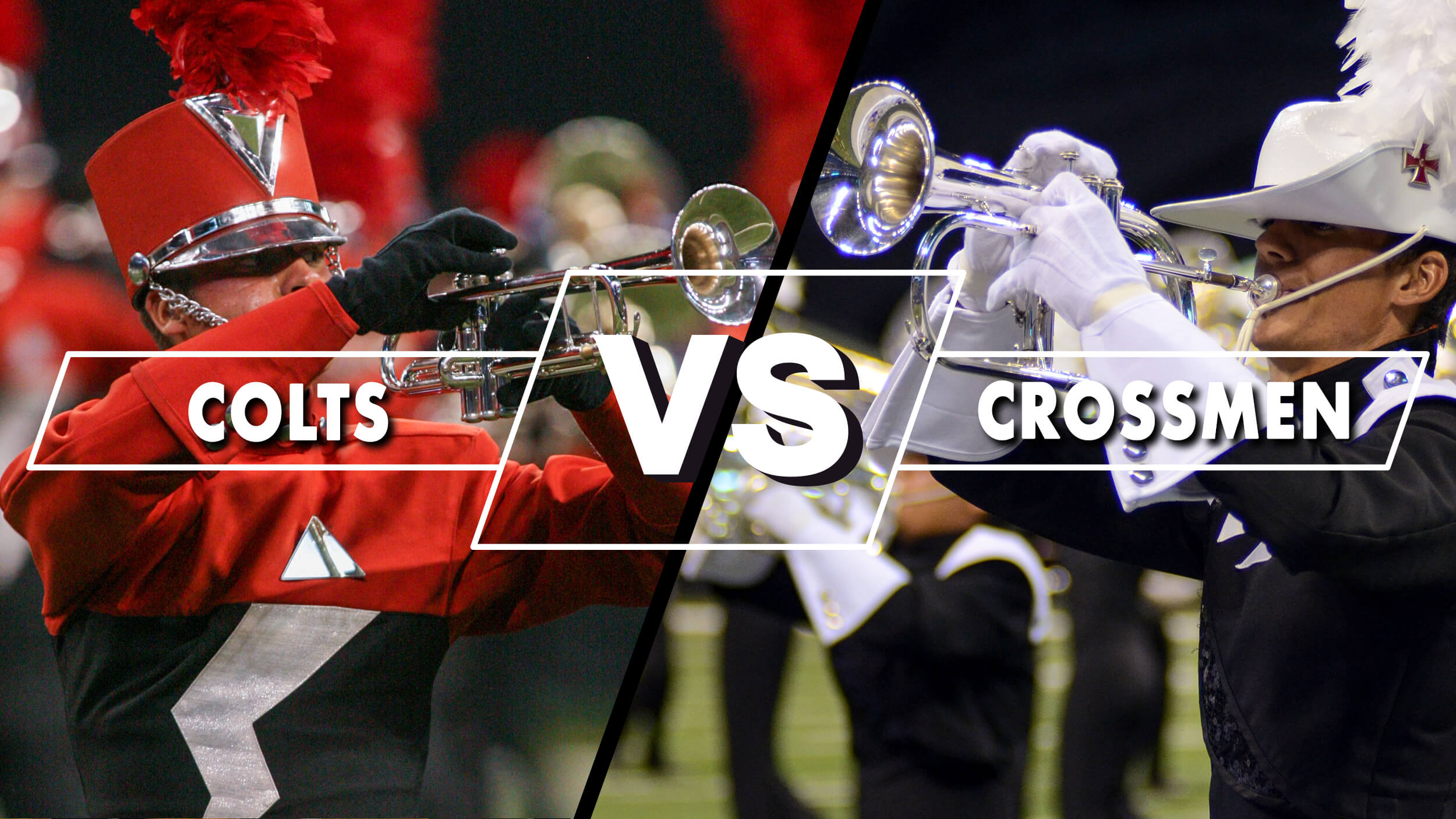 In the two corps’ first matchup of the 2011 Drum Corps International Tour in Bowling Green, Ohio, Crossmen bested the Colts by a mere tenth and a half of a point. This marked the first time since the 2008 DCI World Championship Semifinals that the San Antonio corps finished ahead.

In four subsequent meetings throughout the month of July, however, Colts held serve, regaining the lead and posting an advantage as high as 0.750 points when all World Class corps faced off head-to-head for the first time of the season July 23 in San Antonio.

Just a week later at the Georgia Dome in Atlanta, however, the Iowa corps was put on notice when Crossmen pulled up right alongside as the corps shared 16th place tied at 78.350 points.

Perhaps too close for comfort, Colts came into Sevierville, Tennessee just two days later with a chip on their shoulder, pushing past 80 points for the first time on the season and finishing a whopping 2.25 points ahead of the Crossmen. At the end of the summer of 2011, this marked the largest margin of victory in 11 matchups between the two corps.

Crossmen hacked away at that lead during the remaining weeks of the season, but Colts held onto their advantage even after a nail-biting World Championship Prelims that saw the Iowa corps just 0.250 points ahead. Colts widened that lead to 1.200 as the two corps wrapped up their seasons at the World Championship Semifinals in 16th and 17th places respectively.