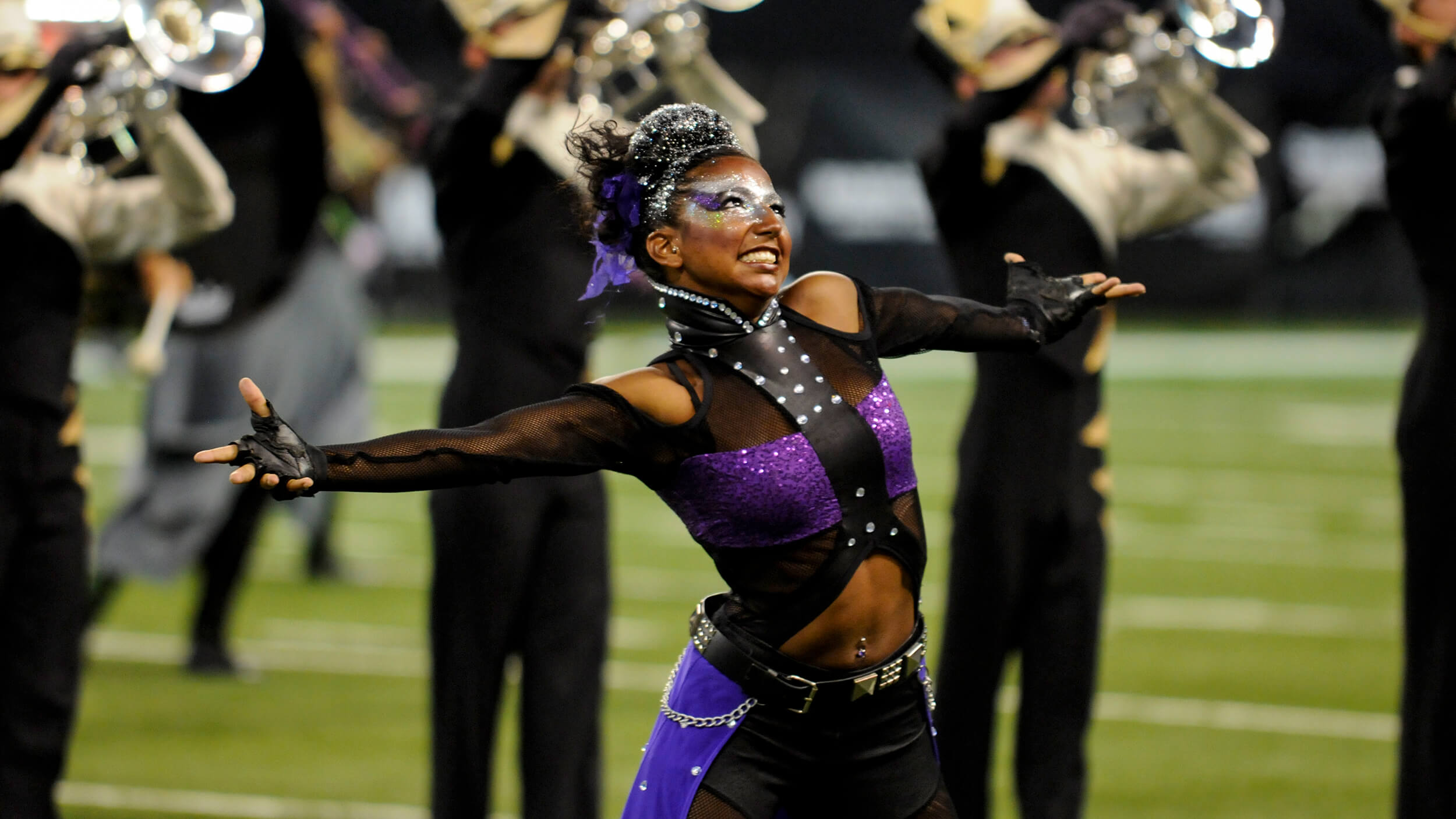 Open Class and World Class corps first competed head-to-head in the 2011 World Championship Prelims in Indianapolis. In the Semifinals at Lucas Oil Stadium, Glassmen didn’t qualify for Finals for the first time since 2004, and only the second time since 1997. Despite finishing 14th or 15th in every caption on the judges' sheets, the Toledo, Ohio corps finished in 13th.

The 14th-place Troopers finished only two tenths of a point behind the Glassmen, held back by placing 18th in percussion. The Academy finished in 15th place, followed by Colts and Crossmen. The 18th-place Pacific Crest finished 3.30 points down from the Crossmen, followed by Blue Devils B, the highest-placing Open Class corps.

Glassmen’s “My Mortal Beloved” explored matters of love and death beyond the great beyond. The show opened with eerie rustling sounds and the clanging of bells accompanying a vampire queen, who wore a long black scrim that she dragged across the field. From the other direction, a doomed male soul entered the field draped in a white scrim. The queen would soon seduce and enslave him, turning him into a fellow immortal vampire to be her forever lover.

Brass arranger Donald Hill wrote an original, untitled piece for the opening segment, “Act 1: Chasing the Moonlight.” The powerful piece musically presented a dark and ominous undercurrent, quoting briefly from Hector Berlioz’s “March to the Scaffold” from his “Symphonie Fantastique” of 1830, one of the best-known examples of composers using the “Dies Irae” Gregorian chant. At the end of the movement, the male in white met and immediately rejected the vampire queen, pushing her away.

Church chimes introduced “Act 2: Falling for the Moonlight,” based on the first movement, “Adagio sostenuto,” from Ludwig van Beethoven’s “Piano Sonata No. 14,” an 1801 work better known as “Moonlight Sonata.” Over the triplet arpeggios of mallet keyboards soared a lone mellophone playing the melody of “Can’t Help Falling in Love,” a tune that Elvis Presley recorded for his “Blue Hawaii” film of 1961.

A single trumpet player took over the melody as the rest of the horn line gathered down the 50-yard line. As the horns spread out into the night sky, the color guard members unveiled flags decorated with the same yellow orb that appeared on the back of the male love interest’s white costume. The yellow orb on the flags to the left of the 50-yard line, edged in a light blue, represented the sun. The orb on the flags on the right side of the field, edged in a dark purple, represented the moon. Each of the two love interests gathered on the side of the field filled with their corresponding flags, followed by the moon flags eclipsing the sun flags. 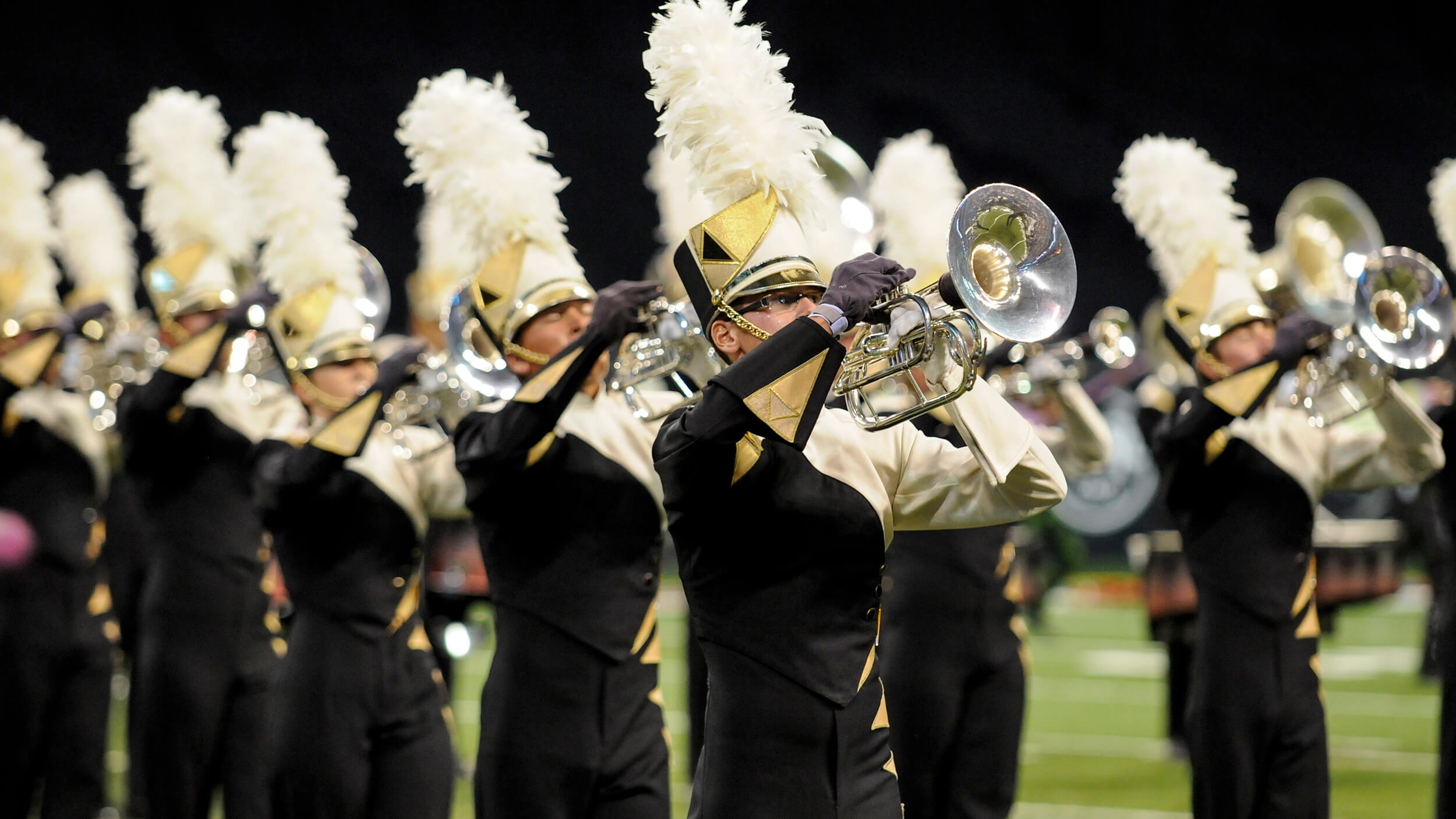 The brass section then cranked up the intensity, and after the pounding of a heartbeat, faced forward in a stationary line to express the melody at full volume. The vampire queen, spinning a moon flag, and her now-lover, spinning a sun flag, stood front and center while a large bass drum menacingly thumped out a heartbeat.

As the horns turned to the back and marched into a giant heart formation, the mallet percussion instruments played an extremely dissonant utterance of the Beethoven work. The piece ended with the guard members spread across the front sideline, spinning silver lamé flags that loudly crinkled, silencing forever any hint of the mortal heartbeat.

“Act 3: Forever Together” started with the drum line playing a menacing interlude, surrounded by flags of blood red moons. This segment also featured Peter Ilyich Tchaikovsky’s 1880 version of “Romeo and Juliet” overture, which is based on the tragic love story popularized by William Shakespeare. Glassmen designers chose the overture for the show as both the love interests in the Shakespeare play and the male character of the corps’ show were doomed to suffer for their love.

Giuseppe Verdi’s “Requiem,” written in 1874 and based on the text of the Roman Catholic funeral mass, accompanied the Tchaikovsky piece. The gloomy character of the music foretold that nothing good could come out of the relationship, even though it appeared that the two characters had mutually fallen for one another. At the movement’s end, the vampire queen ripped off the white costume of her lover and then bit him on the neck, followed by him falling to the ground as a large blood-red parachute covered the entire color guard section.

An original composition based on Verdi’s personal take on the “Dies Irae,” from his “Requiem,” accompanied “Act 4: My Im’mortal Beloved.” The apostrophe in the segment’s title emphasized the immortality of the vampire queen and the former mortality of her lover, now clad in the same dark colors as the queen.

The brass section ended the show in the form of a giant mutated heart, with the guard performers running into the middle of the formation to toss long blood red banners that they pulled from the jackets of the horn line performers as they ran past. The lead male character lifted the queen aloft on his shoulders, realizing he might as well run with the curse of immortality as he would be spending eternity with her.