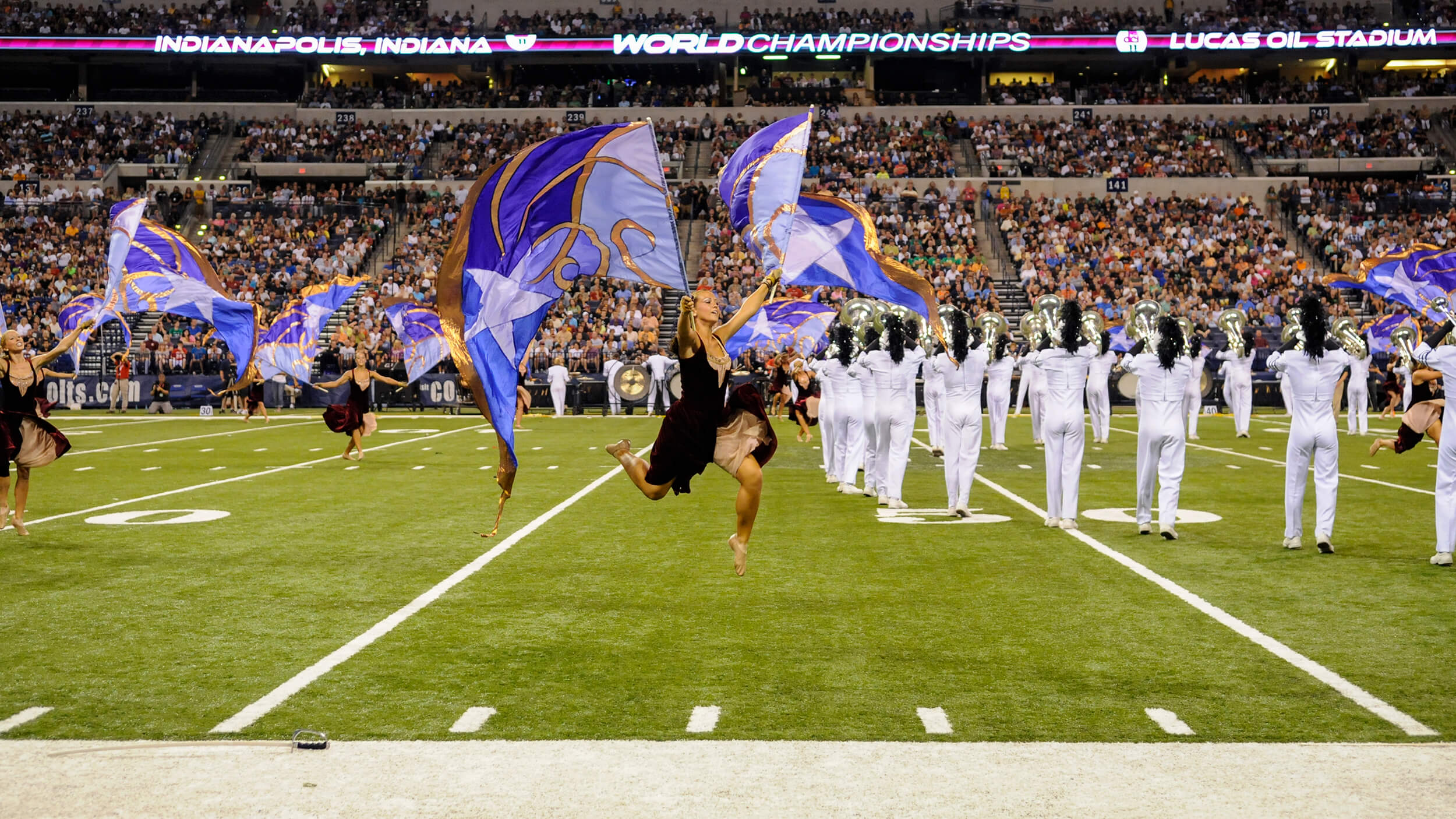 In a unique kickoff to the 2011 DCI Tour, eastern, western and midwestern corps converged in Texas to open the season in the Fort Worth area.

Carolina Crown edged The Cavaliers by 0.35 points at that first show of the summer, with The Cadets and Blue Devils in third and fourth places respectively. The Cavaliers won their next 22 shows, but ultimately finished third at the DCI World Championships in Indianapolis. Carolina Crown, despite topping all the top corps in that early-season Texas showdown, finished in fourth, scoring just a quarter of a point above the fifth-place Phantom Regiment.

The Cadets won the 2011 DCI World Championship title with a show of sanctified angels and loveable demons, while Blue Devils’ production explored the music of Burt Bacharach. The Cavaliers turned drummers upside-down and Crown took us to a “Rach” concert. But for many fans, the Madison Scouts’ “Empire State of Mind” was the closer of the year. 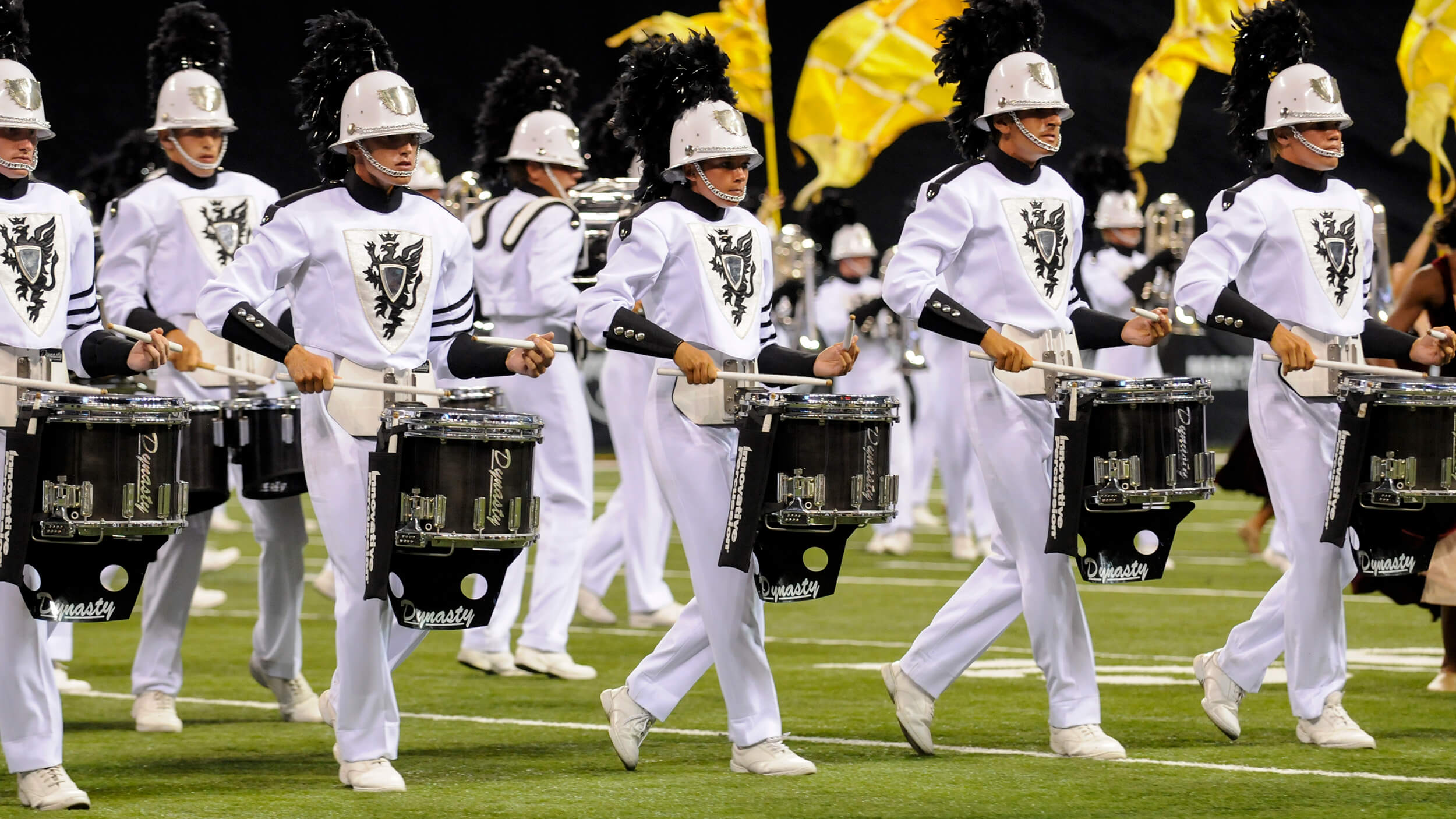 Phantom Regiment’s “Juliet” primarily played off the tragedy of one of the lead characters of Shakespeare’s “Romeo and Juliet,” though there were also musical moments that offered hope for the doomed lovers. All color guard members wore regal velvet-like formal dresses, sometimes physically representing Juliet and at other times inferring her ever-present essence. The gentle prologue to the show introduced the innocence of her naiveté.

The show opened with all but two members of the horn line entering the field from the back, facing backward while the front duet played the melody to Lee Holdridge’s main theme of “East of Eden,” the 1981 television miniseries that starred Jane Seymour and was based on the 1952 John Steinbeck novel of the same name about life in California’s Salinas Valley. Holdridge may be better known for scoring movies such as “Mr. Mom” and “Splash,” as well as the “Moonlighting” television series. This musical selection was the calm before the approaching storm that would ultimately have tragic consequences, introducing the romantic aspirations of Juliet.

Next came the dramatic “Tuba Mirum,” the introduction to Giuseppe Verdi’s 1874 “Requiem,” which Phantom Regiment delivered with what DCI Hall of Fame member Michael Cesario described as a full-bore, open-throttle intensity. This led into the angry and militaristic “Requiem” by Wolfgang Amadeus Mozart, which was left unfinished at the time of his 1874 death and was offered as the composer’s prime downfall in the Academy Award-winning “Amadeus” movie of 1984. Both settings of the Roman Catholic funeral mass were then seamlessly blended with the “East of Eden” theme, offering hope amidst the impending chaos and tragedy of the storyline.

There was bitterness as demonstrated by a high brass versus low brass theme, which represented the conflicting Montague and Capulet families as told in the Shakespeare tragedy. The members of the high and low brass sections gestured toward each other in confrontational poses while playing, the high brass accompanied by the color guard saber line and the low brass with the flag section.

A front ensemble percussion interlude introduced the flashback to a masquerade ball where the main Juliet character danced with a horn player representing Romeo. An incessant bass drum delivered an ominous heartbeat, interrupting the joy of their love.

Following was Nino Rota’s love theme from the 1968 British-Italian movie, “Romeo and Juliet,” known by many as “A Time for Us” due to a later pop song arrangement by Henry Mancini. It’s important to note that for now, the brass player was attired in an all-white uniform, as were the rest of the horns and drums. Juliet removed his white helmet and carried it with her as a sign of her undying love. 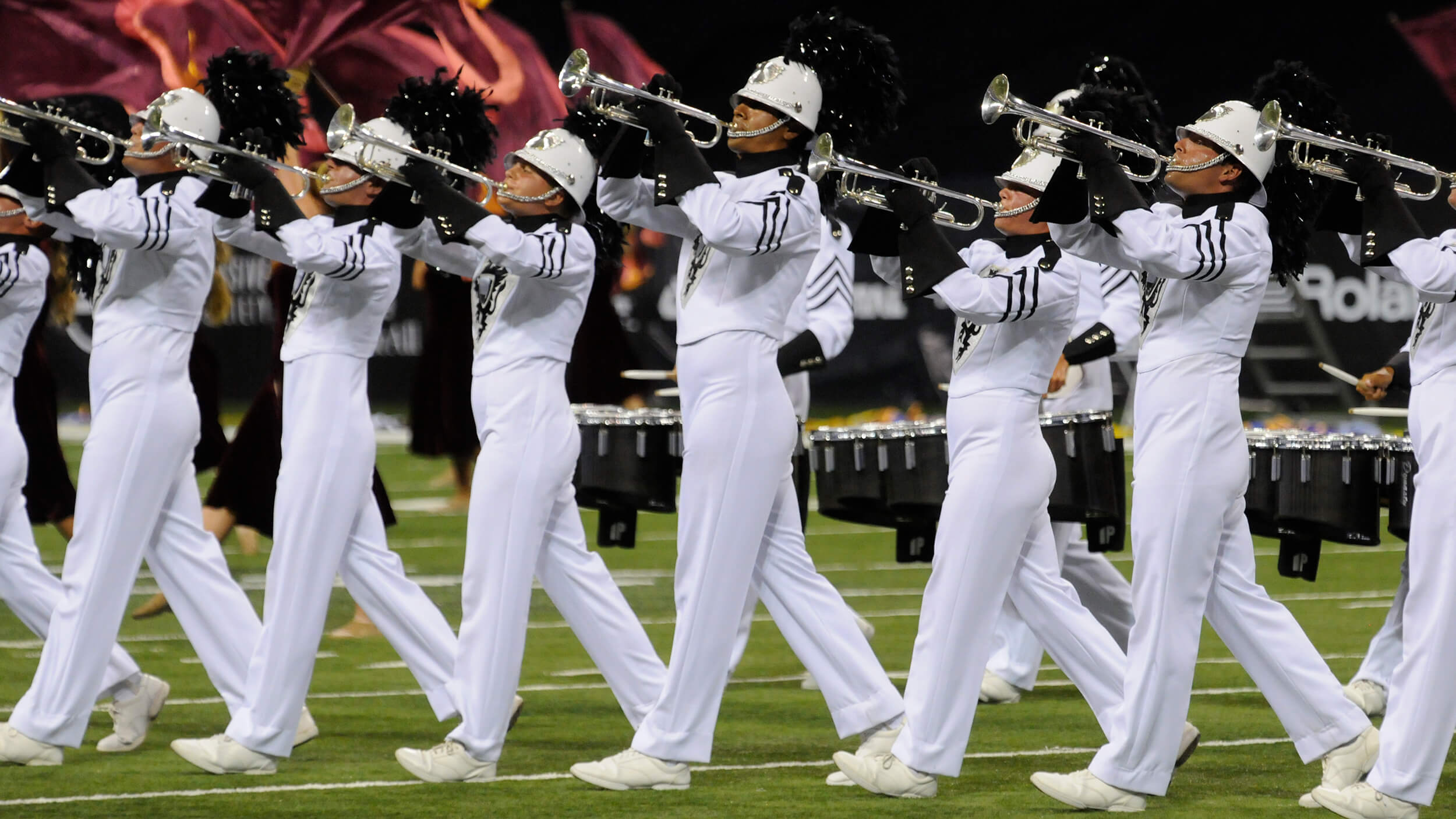 At this point Romeo was still alive, but according to the corps’ design staff, the rest of the production would be told in flashback. Consequently, Romeo was inferred to be dead — We just didn’t know it yet. A full horn line crescent moon shape formed in the upper left corner of the field represented the meeting of the two lovers on the balcony, with purple and lavender flags of twilight and stars further setting the time of day. The sudden explosion of horns accompanied the exploding passion of the two lovers.

As the formation of the moon evaporated into the steam of a new day, the horn line evolved into rays as yellow flags announced the rising of the sun. The fight was on between the Montague and Capulet clans to the furious strains Sergei Prokofiev’s 1938 ballet, “Romeo and Juliet.”

The high brass versus low brass theme again represented the bitterness between the Montagues and Capulets, as the color guard sabers hung with the former and flags with the latter. A popular corps trademark first introduced in 1975 and a must-see moment of the 2011 production, the corps’ color guard brought back a rendition of its iconic “Rockford File” down the 50-yard line, as flags and sabers sequentially spun and tossed their equipment.

Setting up the conclusion of the production, Regiment turned to the soaring strains of Richard Wagner’s “Elsa’s Procession to the Cathedral” which the corps first played in its competitive production in 1979. The work has long remained one of Regiment’s most popular encore tunes. Even though the selection is from Act 2 of the three-act 1850 opera, “Lohengrin,” it is arguably the emotional climax of the work.

On the field, the continual build of the melody led into the emotional final meeting of the two lovers as the horn line formed two heart-shaped outlines. Romeo, now clad entirely in black with a black helmet, desperately reached out to Juliet. His all-black uniform served as the equivalent of black bunting seen during ceremonial moments of mourning.

Juliet ran to Romeo’s side as the flags turned to a purplish blood color, just as he collapsed with his final breath after taking his life in desperation over the continual battling of the two families. She then fell on top of him as the horn line reached a dynamic level approaching that of a fighter jet taking off. Running to the drum major podium on the front sideline, she grabbed a long dagger and thrust it into her chest, a concluding emotional gesture of futility that was saved for the DCI World Championships Finals.