The spread between the 12th- and 13th-place corps during the Semifinals competition was just three tenths of a point, with the Crossmen coming out ahead of the Blue Stars, who had placed in the Finals the previous four years.

The Academy finished in 15th place, repeating the corps' placement from 2011. With the ferociously intense “Left of Spring,” the Arizona corps got a jump on the centenary celebration of Igor Stravinsky's 1913 Ballets Russes premiere of “Le Sacre du printemps (The Rite of Spring),” updating Stravinsky's groundbreaking music of a pagan ritual.

Stravinsky was commissioned to write the music by Sergei Diaghilev, founder of the storied ballet company and the man who launched Stravinsky into international fame. Earlier, the impresario commissioned the composer to write music for the company's 1910 ballet production of “The Firebird” and the 1911 ballet “Petroushka.” “Le Sacre,” based on ancient scenes of pagan Russia, shocked the music world and remains one of the most innovative works ever written for orchestra. Its 1913 premiere in Paris allegedly sparked a near-riot, though consensus is the anger of the audience was directed more at the dances created by Vaslav Nijinsky, which were brutally primal and barbaric, quite out of character with the historical refinement of classical ballet.

In February of 1914, 10 months after the ballet premiere in Paris, “Le Sacre” received its first performance as stand-alone symphonic music, devoid of the added stimuli of the theatrical dance. And in April that same year, Stravinsky attended a performance of the “Le Sacre” in Paris and was carried from the concert hall on the shoulders of those who recognized the work for its remarkable brilliance.

According to Academy staff members, the corps' “Left of Spring” production was a modern day screenplay of the pagan ritual, updated into the realm of contemporary society akin to what film director Baz Luhmann did with a Shakespeare classic when he created the 1996 romantic drama, “Romeo + Juliet.” 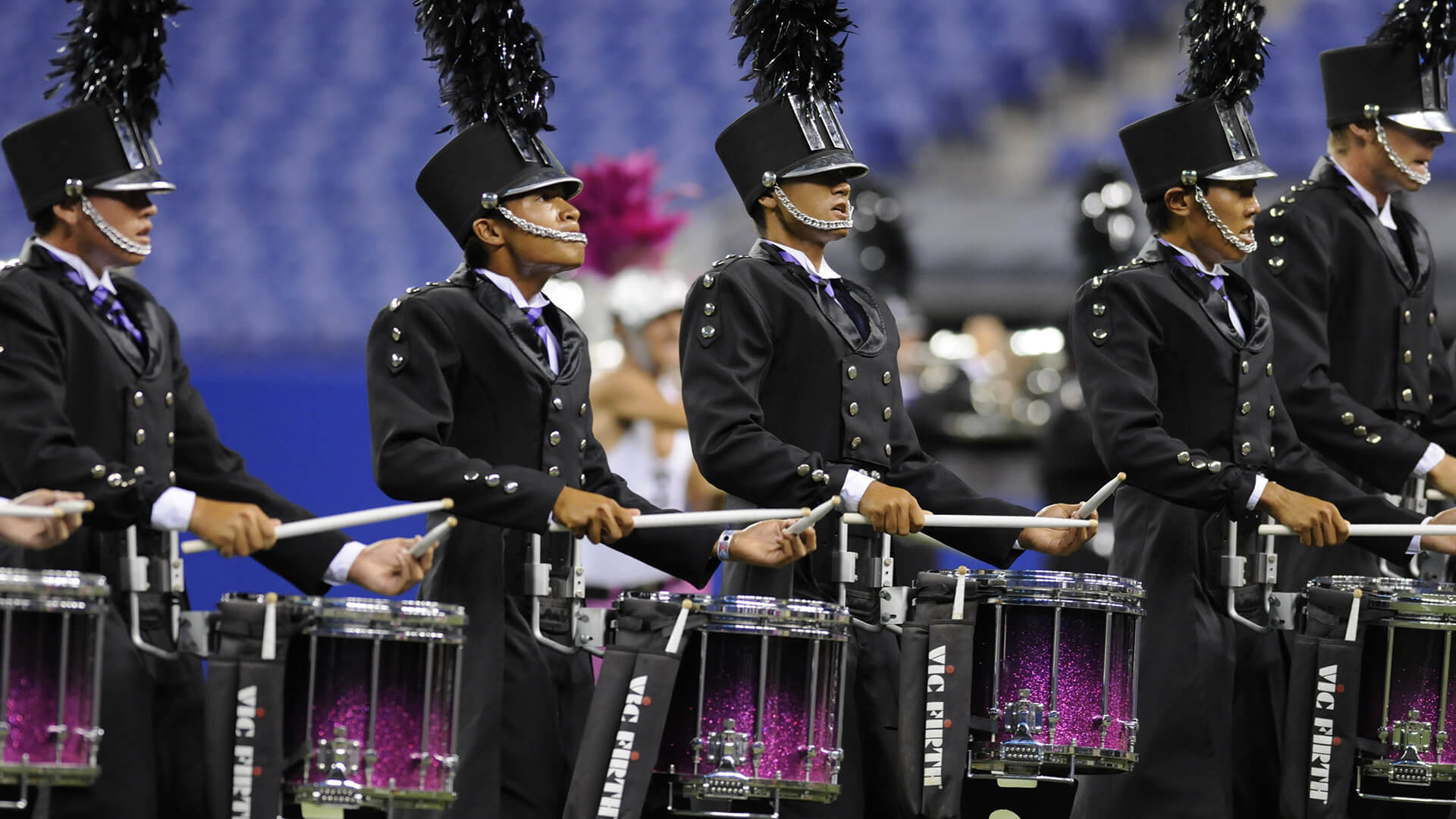 The introductory bassoon solo of the ballet bound the show together, heard six times throughout the corps' performance. Percussion was also a unifying force with the primitive savagery of the original throbbing rhythms largely left intact in the corps' arrangements.

The drum line entered from the back left of the field during as part of the corps' pre-show, accompanied by the primal thrusting of spears by color guard members. This was considered to represent the birth of a life cycle, which would eventually lead from life to death to rebirth.

The first statement of the famed bassoon solo in Stravinsky's “Introduction” was then heard from a single baritone horn. The color guard members, who eventually would remove their purple jackets to reveal sleeveless tops, often wore helmets that gave them the sort of look of the soldiers in the 1973 movie production of “Jesus Christ Superstar.” 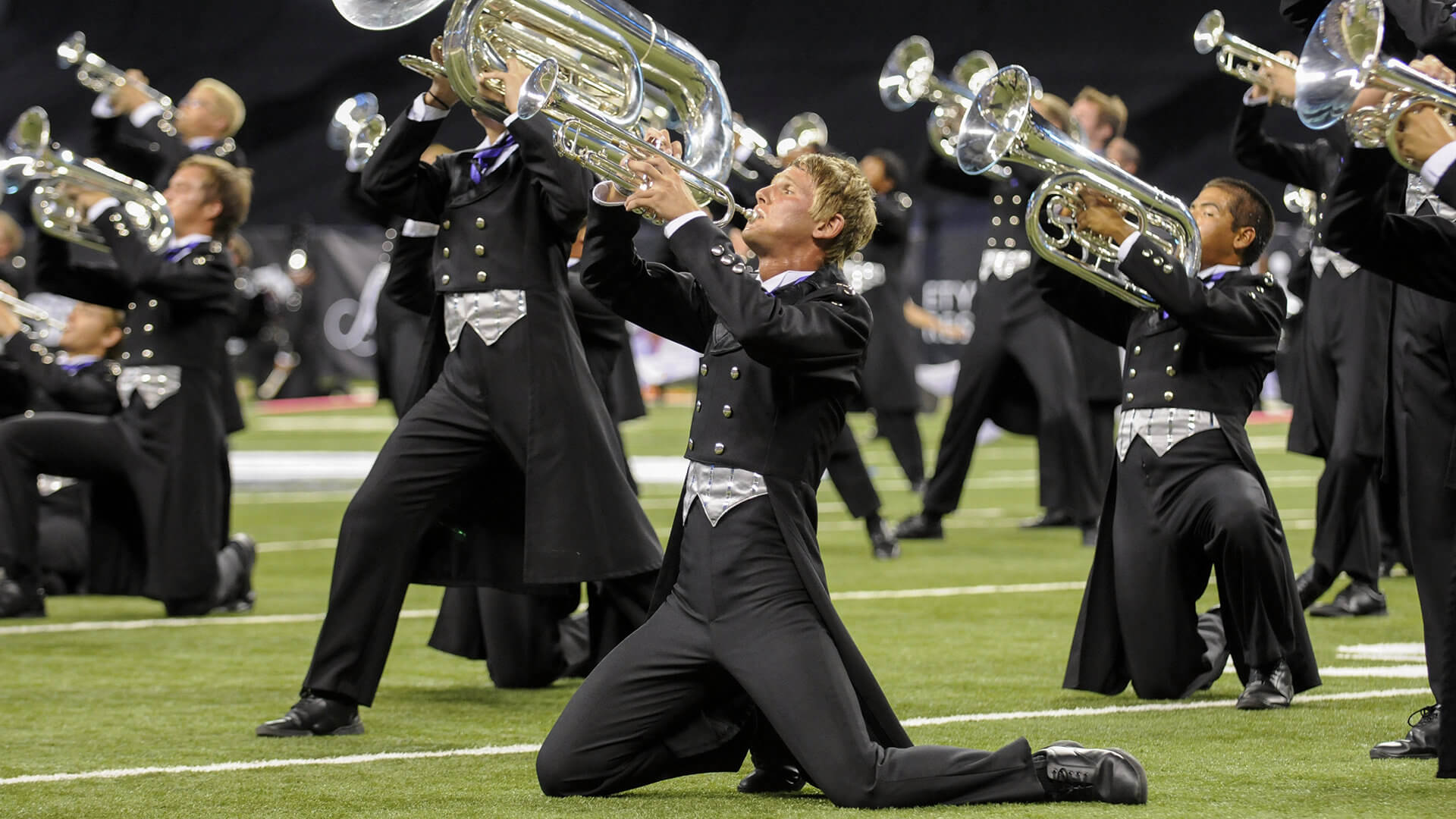 2012 Academy
Among other segments heard in the front half of the show was the pulsating “Augers of Spring” and the intensely brutal “Rituals of Abduction,” depicting the pagan ceremonies that set the blood boiling of those attending that Parisian premiere. True to form, Academy's interpretation was unforgiving. The climactic formation of arrows pointing toward each of the end zones moved away from each other, ripping the fabric of the show apart amidst an explosion of mottled reds, purples, and yellows in the flags.

The piece “Spring Rounds” brought some tranquility into the production, at least for several seconds. After the brass players coalesced into two angry pods, 10 bass drums reintroduced enraged percussive rhythms during a little bit of “Ritual of the Two Rival Tribes” and “The Kiss of the Earth.” Half the bass drummers were seen laying across the drums, legs out, with the other half spinning them around while both sections pounded out the beats.

A recurring synthesized scream heightened the passion during “The Naming of the Chosen One,” and in “Sacrificial Dance,” striped black and white flags of a modified Moiré pattern accompanied the musical violence.

And if the music wasn't intense enough, a color guard member was tossed into the air at the end of the Stravinsky music, falling backward to signify a ritual sacrifice. The two tribes of color guard members fought over her, a fight also seen visually in the drill formations in the tug-of-war between the high and low brass sections. Each section wanted her for herself, but each was also willing to sacrifice her so the other couldn't have her.

For the closer, the corps went outside “Le Sacre” to play Duncan Sheik's folk-rock ballad, “The Song of Purple Summer,” from the 2006 musical, “Spring Awakening,” based on an 1891 German play of the same name. Steven Sater, who wrote the musical's score and lyrics, stated, “For me, ‘purple summer' represents the time of maturation — A time when the fields will yield crops and the horses bear foals again. It is the time when the painful spring of adolescence reaches the maturity of summer.” The original Broadway production of the musical won eight Tony Awards, including that for Best Musical.

On the football field, Academy's sacrificed dancer was then reborn as a flower, seen as a blossom of six petals that were formed by the grounded shakos of the horn line as they moved toward the sideline. 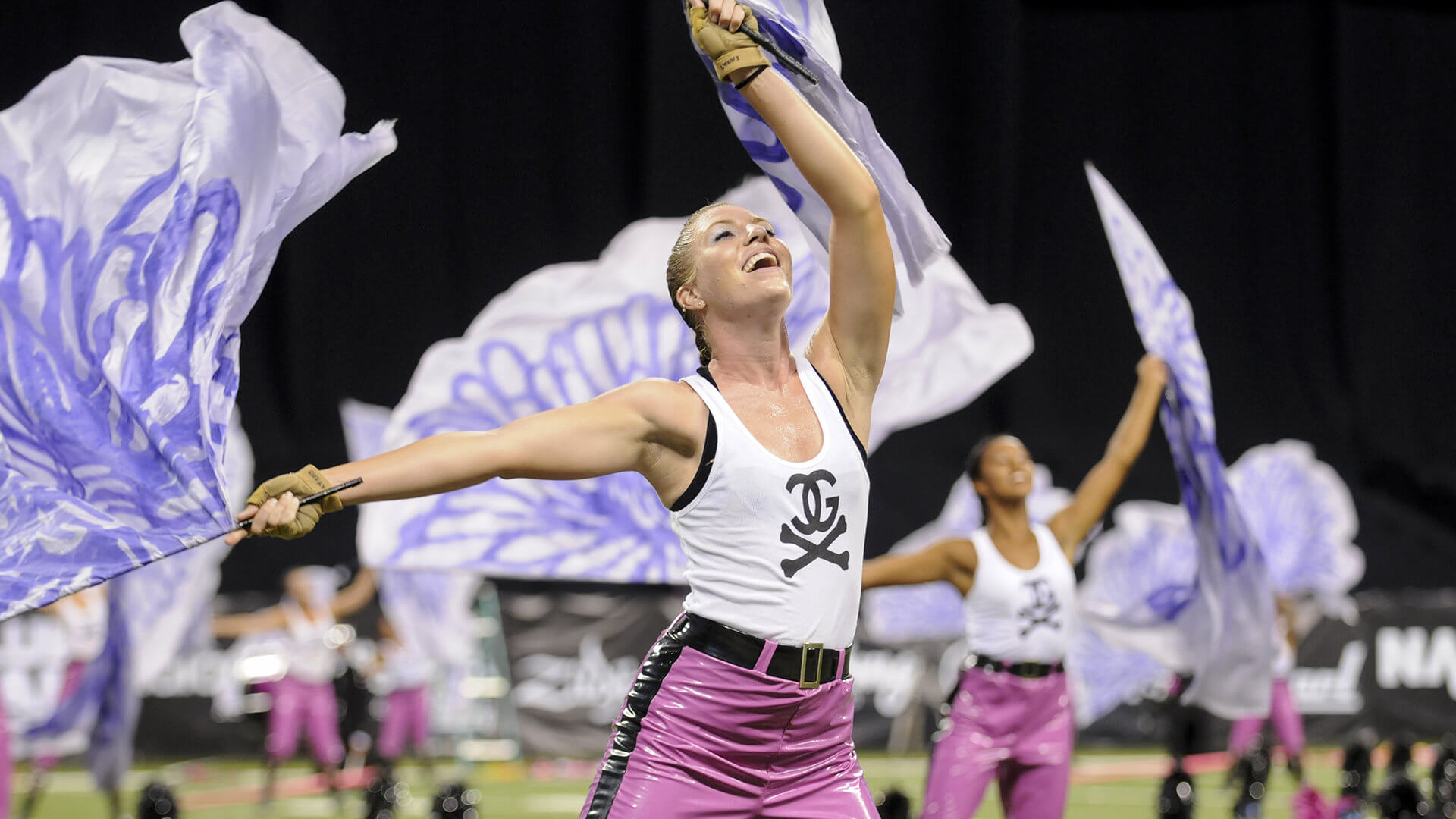 As she spun around en pointe, the brass players began to form the stem that would connect to the flower left behind, with a brief snippet of that earlier bassoon solo making another appearance, hidden amidst the lovely chords of renewal.

Giant double purple flags, in pastel versions of the jackets worn by guard members in the opening, represented the new blossoms of the rebirth and encircled the flower head formed by the corps' shakos. The horns, now the stem of the flower, spread into the end zone while facing backfield, kneeling sequentially as the newly reborn color guard member ran past.

A final statement of the bassoon solo emanated out of the speakers from a synthesizer to accompany the final moments. The members of the horn line and color guard rested on the field, exhausted from the preceding ritual, awaiting the flower to go through the cycle of life and death anew.