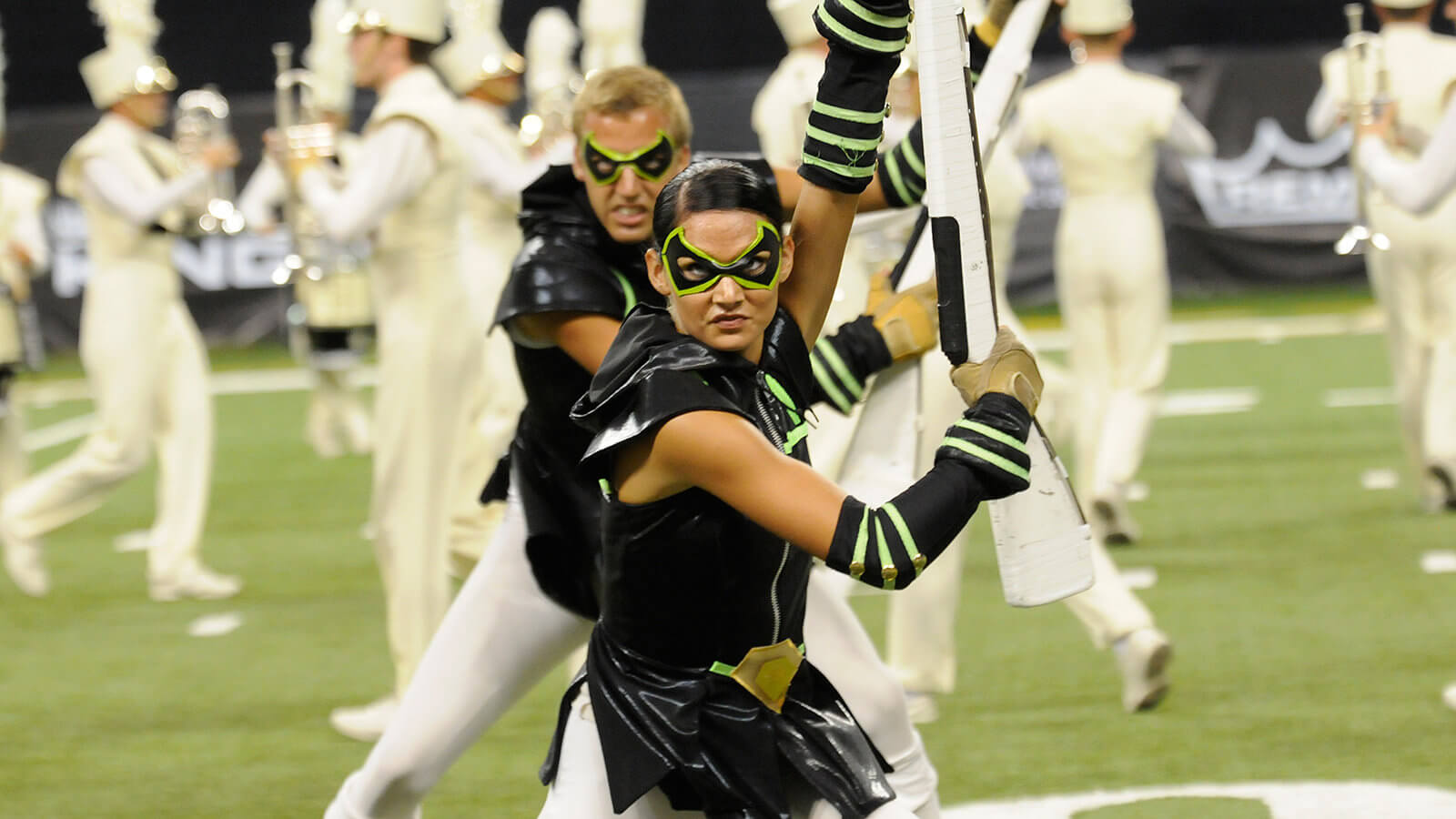 Fans following Drum Corps International’s 40th anniversary season in 2012 witnessed the Blue Devils pick up the corps’ 15th title at the conclusion of an undefeated season, as well as awards for Best Color Guard, Best Percussion Performance, Best Overall General Effect, and a co-win with Carolina Crown for Best Visual Performance. (Crown won the award for Best Brass Performance.) Further down in the rankings, but quite happy to be there, Crossmen squeaked into the Finals competition for the first time since 2004, topping the 13th place Blue Stars by a scant three tenths of a point.

Carolina Crown’s “For the Common Good” was largely based on Aaron Copland’s iconic “Fanfare for the Common Man.” More accurate, the music was inspired by Copland’s own reworking of the fanfare in the fourth and final movement of his 1946 “Symphony No. 3,” an optimistic opus composed near the end of America’s victory in World War II. Copland spent the entire final movement of the symphony working with the themes of the fanfare before unleashing its full glory in a loud and grandiose proclamation that remains among the most powerful orchestral declarations of the 20th Century.

The heritage of “Fanfare for the Common Man” began in 1942 when Copland was asked by Cincinnati Symphony Orchestra Eugene Goosens to contribute a fanfare for an 18-fanfare project he was planning for the orchestra’s 1942-1943 season. The various fanfares, written by 18 different American composers, were each to open one of the orchestra’s concerts at a time during the war when it seemed the entire world was falling apart.

Copland’s fanfare is the only one among the series that achieved massive success, and it remains the only one still regularly performed. In composing it, he was inspired by a 1942 speech by United States Vice President Henry Wallace in which Wallace, generally vastly overshadowed by President Franklin D. Roosevelt, spoke to the Free World Association during the gloomiest days of the war. Originally titled, “The Price of Free World Victory,” Wallace’s proclamation, “The future of our country lies in the common man,” resonated with the nation and became known as the “Century of the Common Man” speech.

Carolina Crown musical director and brass arranger Michael Klesch expressed how the speech and the fanfare influenced the conception of the corps’ production. “It’s about human ability, the first half being about people finding the unique superpowers within themselves,” he said. “When you get to the fanfare, everyone uses their personal abilities to work toward a common purpose, as seen by the color guard members shedding their individual costumes … people joining together for the common good.”

Perhaps the most readily identifiable unique visual element that jumped out at the beginning of the show were the 14 timpani scattered around the perimeter of the field, replicating Copland’s timpani motifs from the fanfare that are instantly identifiable by anyone who’s heard the work even once. It was a daring musical theme, seeing how difficult it was to coordinate the sets of timpani from across the field. The challenge of getting all the timpani to sound as one was noticeable earlier in the season. The percussion section placed as low as seventh at the DCI Southeastern Championship just two weeks earlier.

As the show began, performers were scattered across the field, having not yet come together for the common good. The corps members slowly coalesced to the horn line in a giant arc, with snippets of the music heard from various parts of the field. But it wouldn’t be until much later that the fanfare would be heard in a single cohesive form.

After opening statement, the corps performed “Nightmare,” the first of three movements from French composer Bertrand Moren’s “Dreams,” originally written for brass band. The corps’ rendition was intended to capture the swirling angst that led to Vice President Wallace’s speech. 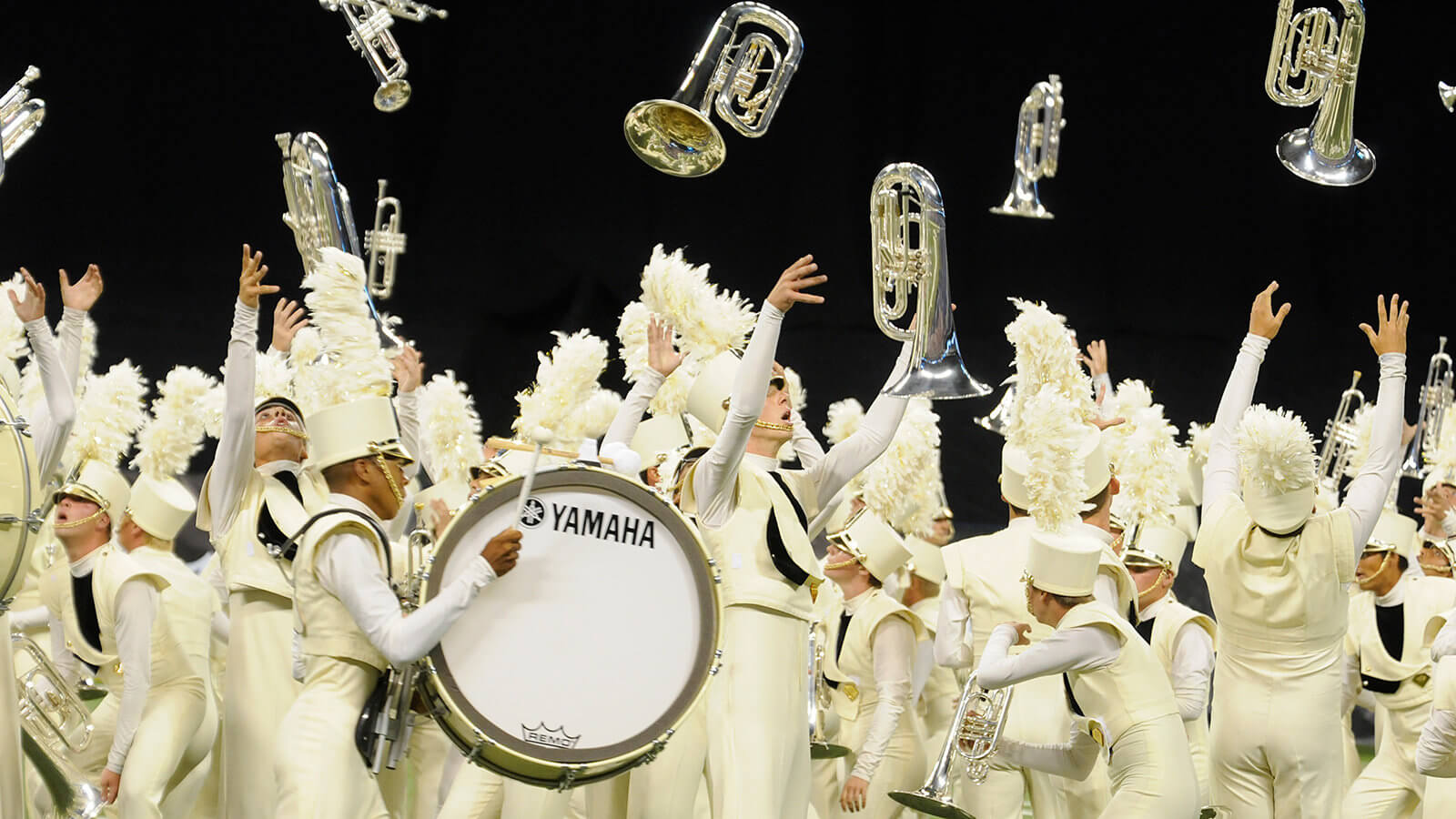 After a continuous flurry of notes from “Nightmare” that seemed to come from everywhere at once, there was a sudden change of pace that heroically introduced the theme of the fanfare. But as soon as that was heard, the corps went off on a journey of “Visions,” the jazzy tango-inspired third movement of “Dreams.” The culmination of this movement led the corps back to the Copland piece, with metallic keyboards introducing the interweaving woodwind lines from the finale of the symphony, during which members of the horn line performed a variety of choreographed movements while lying on the field.

As if growing out of the ground, the horns introduced the fanfare in its most recognizable form, accompanied by the reverberation of timpani from across the field. The color guard members shed their black accoutrements and now wore a white costume, speaking to the unity and purity of the show concept. Astoundingly, horn members continued to play the exposed lines of the fanfare while kneeling down, reclining, and standing up throughout the melodic line. The control required of their bodies while playing their instruments was staggering.

The horns then formed a full-field company front and pushed toward the front stands. The pace and volume picked up dramatically toward the end of the show, and the final drill formation of the corps’ trademark “crown” appeared. And at that point, the collective pulse of the audience, united in a common palpitation, was at risk of drowning out the standing ovation.

For this week only, you can save on the DVD or Blu-ray set that contains this complete Carolina Crown performance, along with all of the finalist corps at the 2012 DCI World Championship.

(DVD or Blu-ray set available this week only for 20% off.)