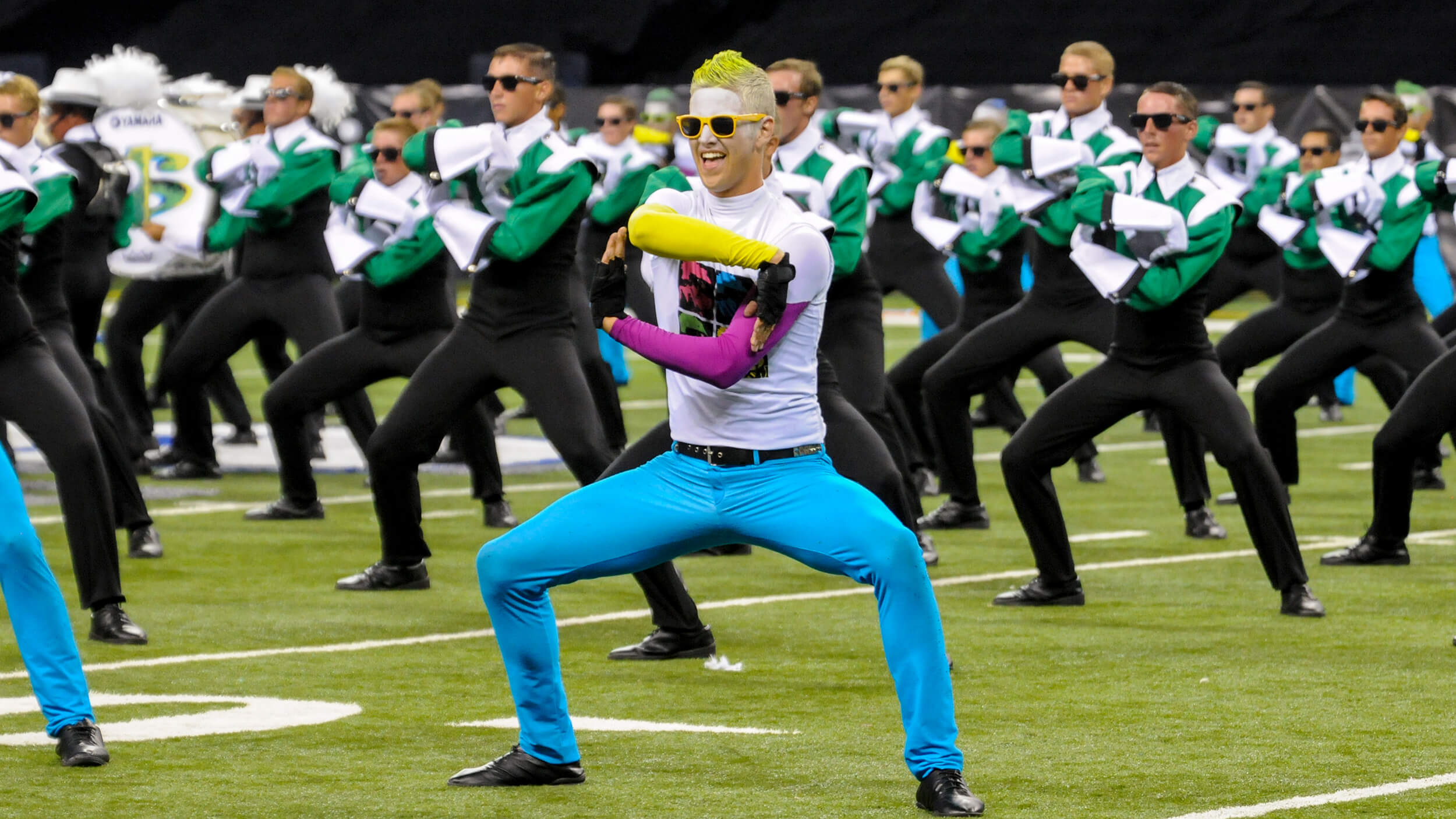 Drum Corps International celebrated its 40th anniversary during the summer of 2012 with a variety of special events during the World Championships in Indianapolis.

The Blue Devils left Lucas Oil Stadium with their 15th DCI World Championship title, putting an exclamation mark on an undefeated season. But it may have been the 12th-place Crossmen that celebrated the most, making the top-12 Finals cutoff for the first time since 2004. Crossmen’s success came at the expense of the Blue Stars, with a three tenths point spread in Semifinals knocking the Wisconsin corps out of the big event for the first time since 2008. 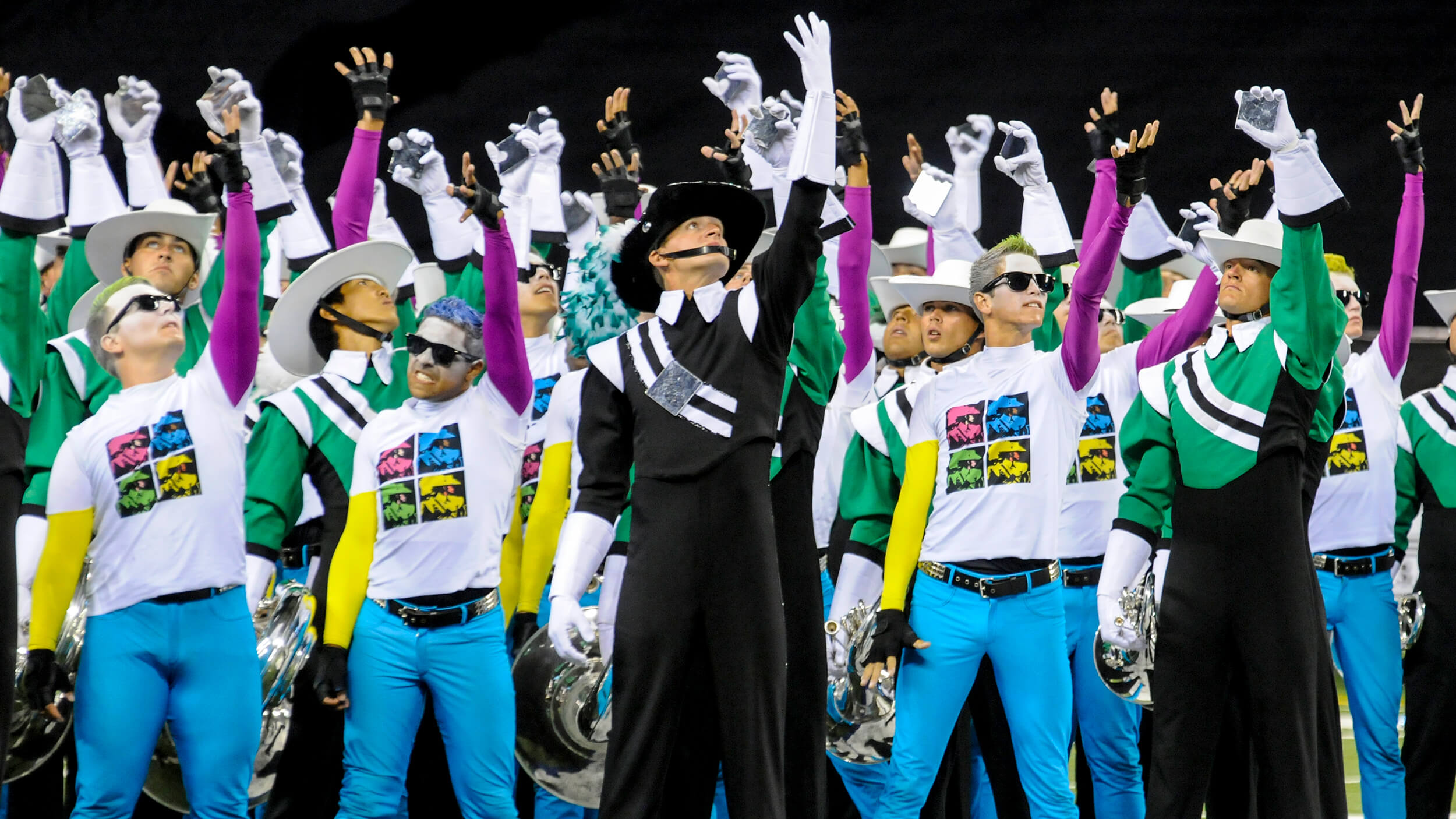 The Cavaliers’ finished in eighth place, matching the corps’ lowest placement since 1984. During the 29 years from 1984 through 2012, the corps finished among the top three corps an impressive 20 times, winning the World Championship title seven times between 1992 and 2006.

“15 Minutes of Fame” answered the question, “What does the music of classical orchestral masters Strauss, Mozart and Leoncavallo have in common with pop artist Lady Gaga and dubstep electronic dance music? And how would a sudden bestowal of fame and riches change one’s life?”

The inspiration for the title came from text printed in a 1968 program pamphlet for a Swedish exhibition of the pop art works of Andy Warhol, famed for elevating images of Campbell’s Soup cans and Marilyn Monroe to the pantheon of high art. Those words, “In the future, everyone will be world-famous for 15 minutes,” have long been attributed to Warhol alone. But it’s claimed the now-iconic statement is a combination of thoughts uttered by Warhol and an author who was interviewing him for a book.

Warhol was fond of using bright colors in his works, and the colors magenta, blue, green, and yellow became the visual focus of The Cavaliers’ show.

The corps’ production commenced with operatic overtones and moved chronologically in a musical progression from opera to dubstep. The swashbuckling opener of Richard Strauss’ “Don Juan” returned from the corps’ 1984 show, the production that launched the corps on its journey of primarily exploring symphonic music. The German composer — not to be confused with the unrelated Johann Strauss, “The Waltz King” — wrote the orchestral tone poem in 1888, basing it on the fictional story of a wealthy-but-hopeless womanizer.

The work was presented as a literal pathway to fame, starting with members lined up on either side of a corridor to clap for and eagerly welcome the appearance of a famous pop sensation, represented by color guard members wearing dark sunglasses and T-shirts with four squares of the colors mentioned above.

Further setting the theme, bass drum heads came printed with dollar signs, reminding fans that pop superstars were rich; even if their wealth would go on to destroy them. A narration repeatedly proclaimed, “In the future, everyone will be world-famous for 15 minutes.”

At this point color guard flags were divided up into four groups, each one featuring two Campbell’s Soup cans of one of the aforementioned colors. At the end of the opening number, the horn line formed the numeral “15” on both sides of the field.

The next selection, Michael Daugherty’s “Dead Elvis,” was a 1993 work for solo bassoon and small ensemble, borrowing from the “Dies Irae” musical theme of death in the Latin mass and recorded on his “American Icons” album. Daugherty is the same composer who wrote the music for the corps’ 2000 title-winning “Niagara Falls” show.

This segment of the show demonstrated the greed and corruption of fame, with dollar signs twice cropping up in the drill formations. Color guard flags featured sunglasses; required accessories for any famous person who wants to hide a bit, even when out in public.

“Paparazzi” by Stefani Germanotta (Lady Gaga) and Rob Fusari came off Gaga’s 2008 debut studio album, “The Fame.” The song told the story of Gaga’s struggle to keep a life balance during her rise to fame; its lyrics describing the discomfort of being stalked by someone obsessed with being around those who are famous. The Cavaliers treated it as the perils of isolation, the artist performing in front of an arena of screaming fans and then spending the night alone in a hotel with room service.

Next the corps turned to Mozart’s 1787 work “Don Giovanni.” This short piece quickly transitioned into “Vesti la Giubba (Put on the Costume),” from Ruggero Leoncavallo’s aria for tenor in his “Pagliacci” Italian opera of 1892. That work recounted how the lead actor, playing the part of a clown, realized he had to go on with the show after learning his wife was unfaithful. The faces of the color guard members were painted white as if they were wearing clown make-up.

Michael and Leslie Gore’s “Out Here on My Own” came from “Fame,” the 1980 musical starring Irene Cara, alluding to the future when everyone is to be famous for 15 minutes. It was combined with a contemporary semi-pop treatment of Edvard Grieg’s “In the Hall of the Mountain King,” written in 1875 for the Ibsen play, “Peer Gynt.” The work is better known as part of the composer’s “Peer Gynt, Suite No. 1,” later extracted from the incidental music for the play. This section was about the artist accepting and being at peace with his fame and the pressures of the elaborate lifestyle that fame and money brought to the table.

Cavaliers designers added an electronic dubstep closing tag during the second half of the season, with all corps members donning opaque sunglasses and moving to a large square block to perform a dance primarily based on eccentric arm motions. It was said by the staff to be a pop art impression of the 2012 Cavaliers, celebrating everyone who is famous, including the members of the corps. The staff said the final dance “spoke” to the members because it was music they could relate to off the field, allowing them to better “own” their performance.