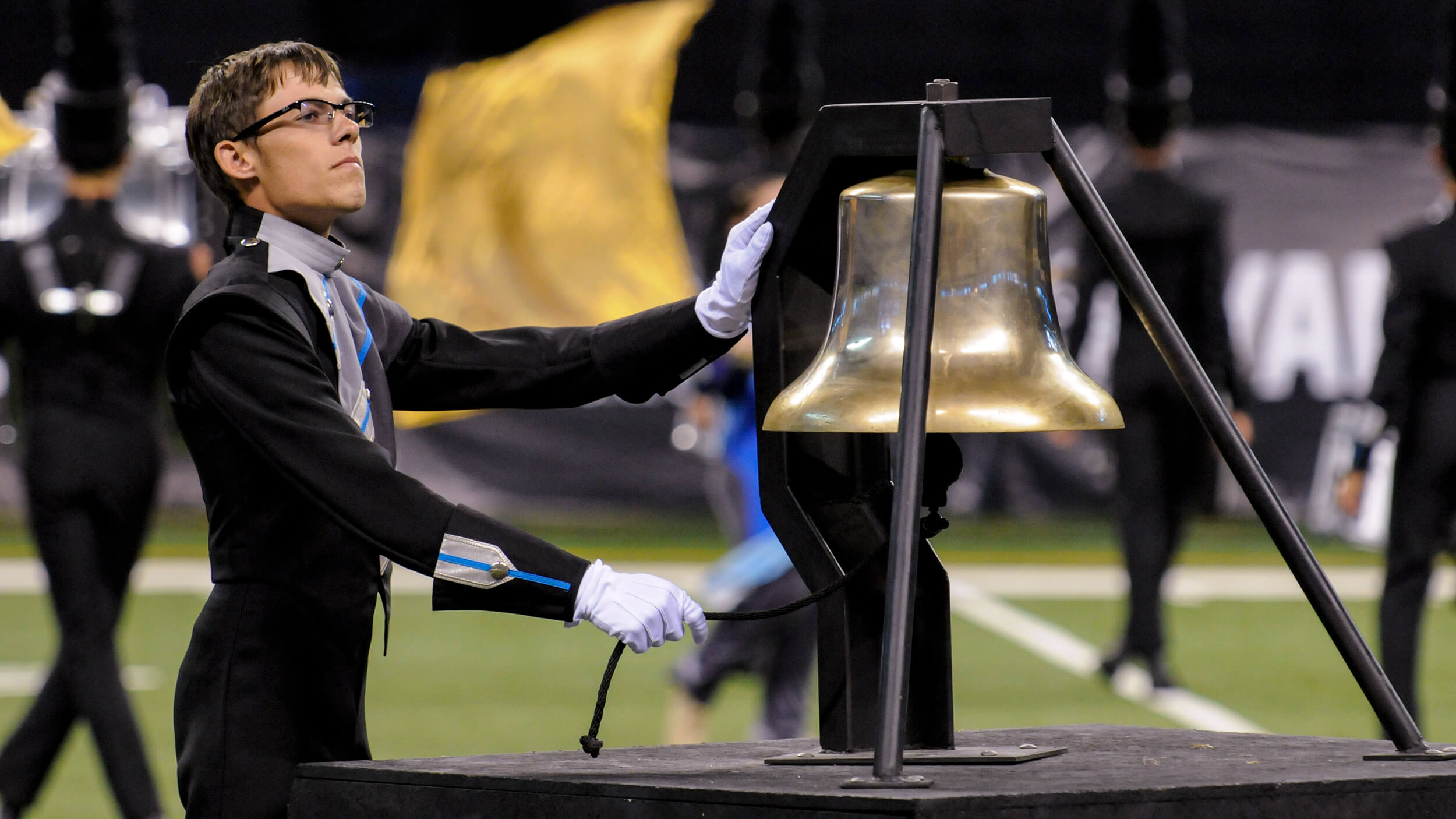 Oregon Crusaders’ “Dreaming in Color” production brought the Portland corps its second World Championship title after going undefeated in the 11 Open Class shows prior to arriving in Michigan City.

In second place, Blue Devils B won the caption award for Best Percussion for its show about a river journey, and the fourth-place Spartans took the Best Color Guard award. Vanguard Cadets, despite finishing at the Open Class Finals in third place, five hundredths of a point under Blue Devils B, didn’t win any caption awards for its show about the traditions of the organization’s iconic Aussie hat. 7th Regiment finished in fifth place, followed by Genesis, Gold, and Legends. 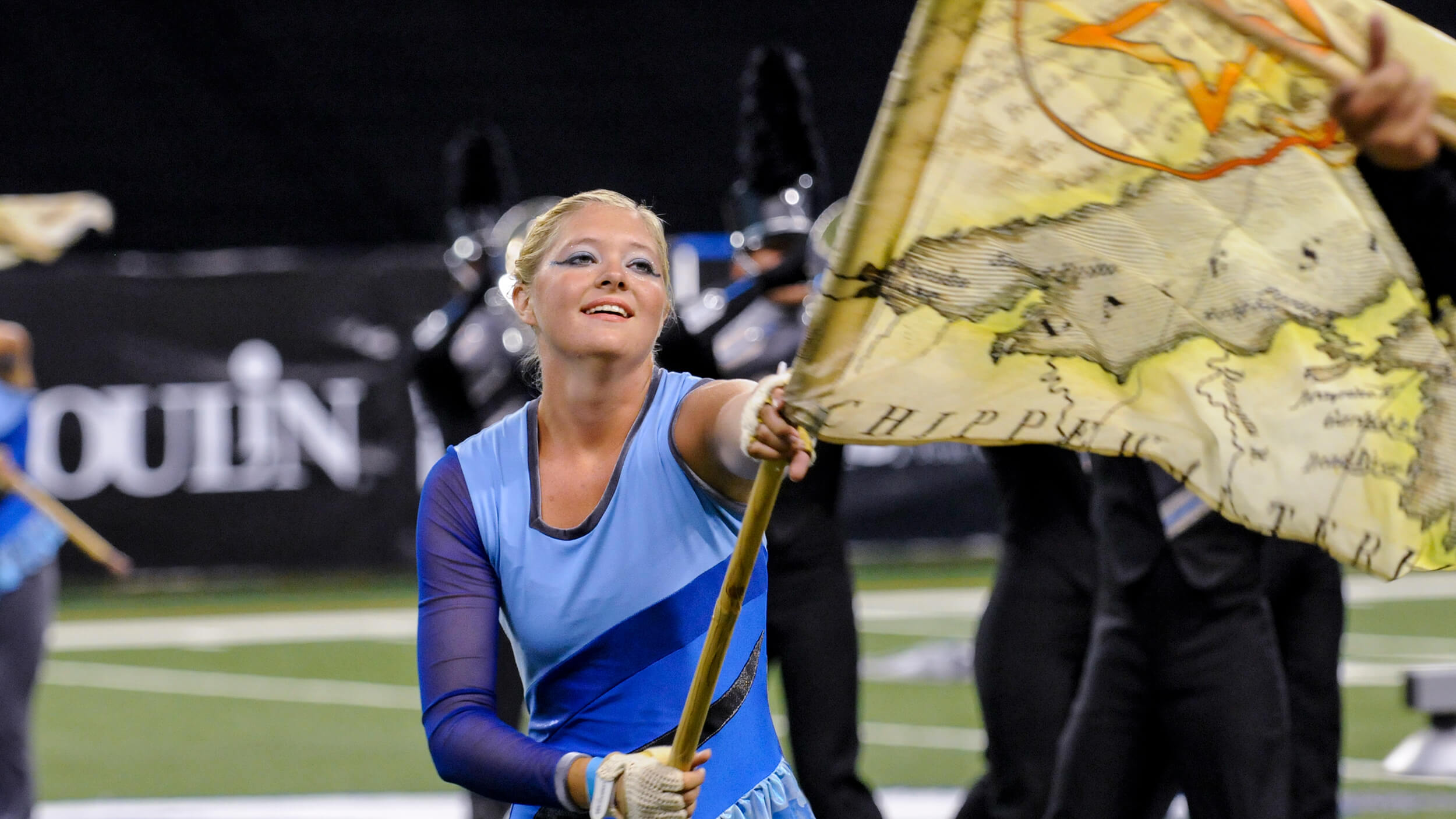 Kalamazoo, Michigan’s Legends brought a show titled “The Edmund Fitzgerald” to the field in 2012, which honored the 29 men who lost their lives when the great ship suddenly sank during a Lake Superior storm in November of 1975.

At 729 feet in length, the SS Edmund Fitzgerald was the largest ship on the Great Lakes when commissioned into service in 1958. It went under the waves in an area that has claimed more than 240 ships, just 17 miles from the Great Lakes Shipwreck Museum at Whitefish Point, Michigan. The museum displays the 200-pound bronze wheelhouse bell that was recovered in 1995 at the request of the families of the lost sailors.

To help the corps connect with the tragic event in their home state and the theme of this production, the members and staff of Legends took a trip to the museum during the corps’ return trip from the DCI Minnesota competition in mid-July, paralleling from the safety of dry land the ship’s final route from Superior, Wisconsin to a steel mill outside of Detroit.

The Fitzgerald's bell served as an inspiration in Legends’ production, with the corps having a ship’s bell sitting near the front sideline throughout the production.

The corps opened the show with “Dawn,” the first movement from Benjamin Britten’s “Four Sea Interludes.” The composer extracted the suite from his 1945 opera, “Peter Grimes,” with “Dawn” conjuring the calmest moments of the sea off the coast of his native England.

Over the melody of the backfield-facing corps, the mallet percussionists introduced a snippet of Gordon Lightfoot’s “The Wreck of the Edmund Fitzgerald,” written about the sinking of the ore carrier and originally appearing on his 1976 album, “Summertime Dream.”

The show progressed into Britten’s second interlude, “Sunday Morning,” which in the original work radiantly captured the spirit of an English community gathering at the local church. The piece, accompanied with flags of different colored blue waves echoing the various blue strata of the color guard costumes, was conceived by the corps staff as representing the enthusiasm of the dock workers loading the ship prior to it leaving port. 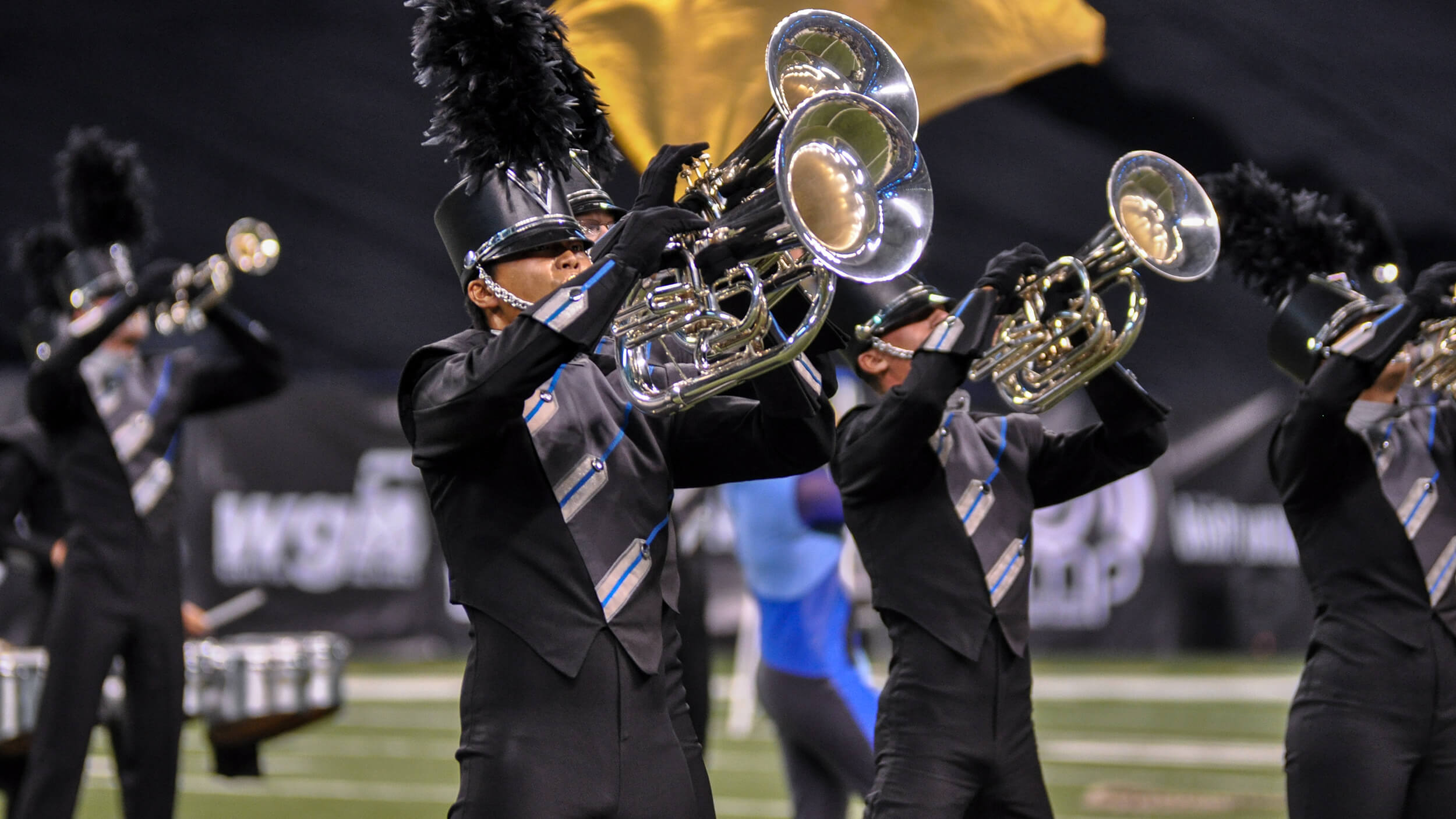 A banner with the ship’s name, a rope utilized by the dockworkers, and an anchor chain rhythmically slammed against a wooden box led to a blow of the ship’s whistle as it was about to depart the harbor on its fateful trip. Yellow flags utilized at this point conveyed the impression of a sunny day that held no foreboding notions about what was to come.

Sounds of the impending storm were heard prior to James Horner’s “Coming Home from the Sea” from his score to the 2000 movie, “The Perfect Storm,” about the sinking of another maritime craft. The music presented an aural image of Lake Superior becoming increasingly roiled, leading to eight large storm cloud silks of shattered blue and gray dispersing across the field as the ship broke up on its way to the lakebed.

A large billowing fabric of blue swept over the horn line, in essence swallowing up the ship, followed by two loud bass drum beats signaling the two broken halves of the ship striking the lake bottom.

The slow tolling of the bell accompanied the final segment of James Horner’s “Bishop’s Countdown” from James Cameron’s “Aliens” film of 1986, a tender ballad evocative of the loss of life. The bell rang 29 times, one time for each of the lost souls. This continued into Lightfoot’s “The Wreck of the Edmund Fitzgerald,” heard for the first time in a more complete version rather than the snippets that poked through the earlier part of the production to anticipate the ship’s sinking.

In his lyrics, Lightfoot mentions the tolling of the bell 29 times at the church where the memory of the sailors was being honored. The 29th and final peel of the bell occurred just as Legends’ show ended.

At the shipwreck museum the corps visited, the bell continues to annually be rung 29 times during a memorial to those lost on the Edmund Fitzgerald. At the original Detroit memorial service in 1975, a 30th ringing of the bell honored all who lost their lives on the Great Lakes that are so important to the nation’s commerce, and whose waters, which brought death to many people, continue to bring life to the vibrant great cities along its shores.