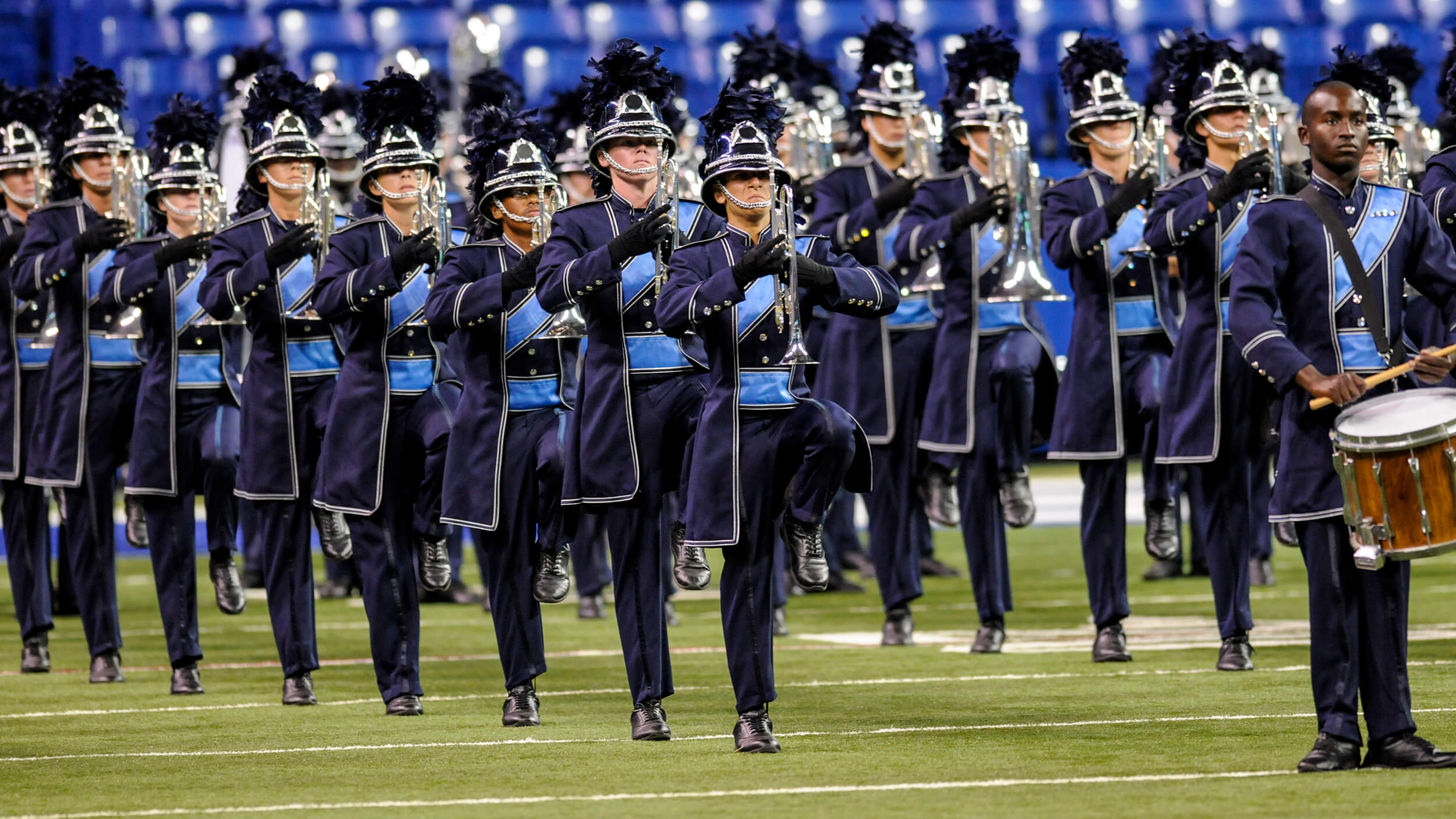 In 2013, Lucas Oil Stadium in Indianapolis played host to the Drum Corps International World Championships for the fifth time.

2013 also marked the first time since Phantom Regiment tied for the title in 1996 that a new corps was declared World Class Champion when Carolina Crown took first place with a perfect score in the brass performance caption. Crown also earned top scores in visual performance and general effect.

Blue Devils’ homage to the 100th anniversary of Stravinsky’s “Rite of Spring” finished in second, just a quarter of a point behind Carolina Crown. The California corps captured top caption honors for color guard for the sixth consecutive year. The Cadets finished third with a Samuel Barber show, taking the award for top percussion while edging Santa Clara Vanguard by just a tenth of a point. 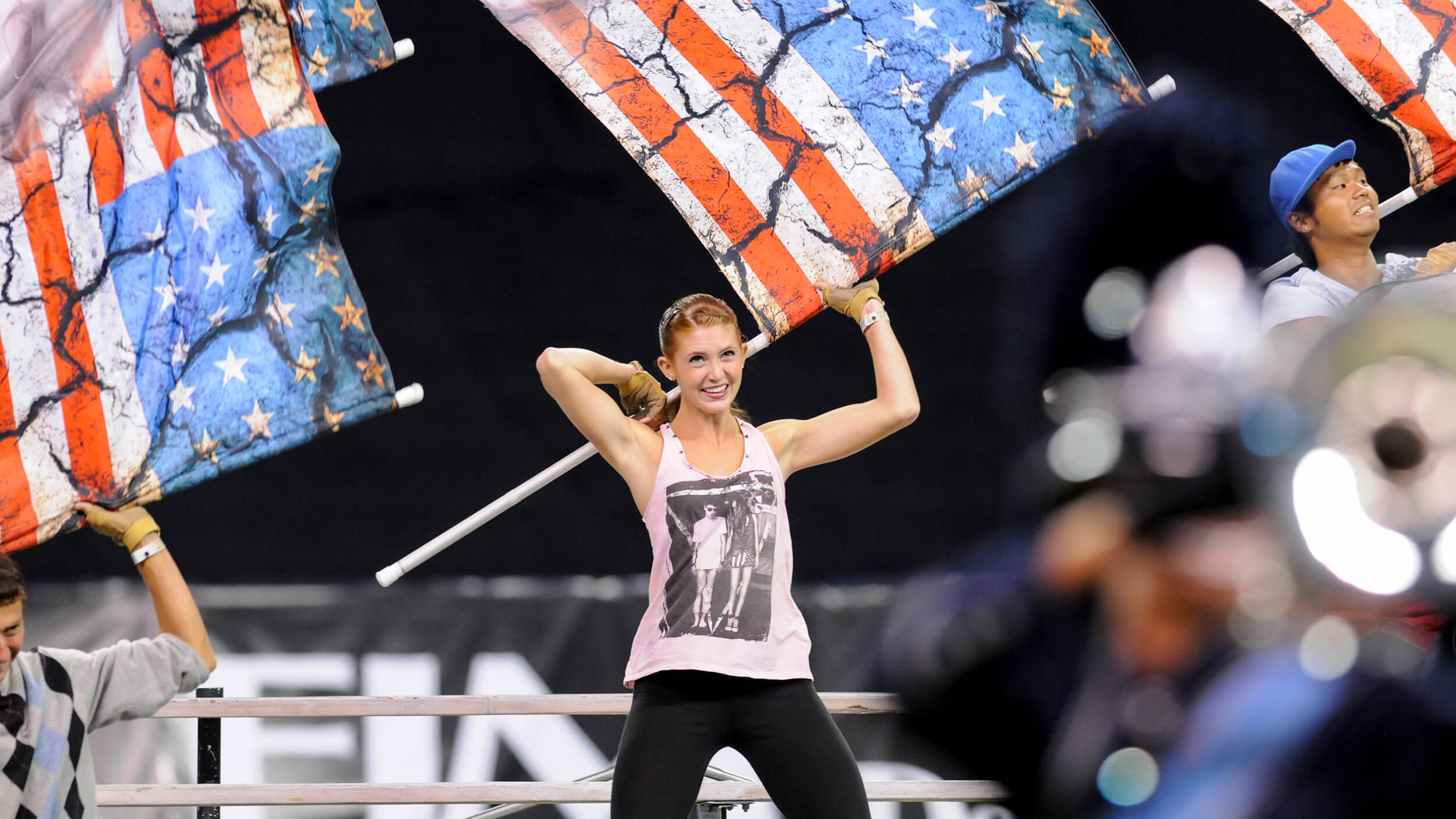 In fifth place, ending the season just a tenth of a point above Phantom Regiment, Bluecoats visited Main Street USA with “… to look for America.”

The show didn’t tell a literal story, but conveyed the aesthetic of life in the United States, presenting a set of snapshots of American culture. References to local parades along the way created a unifying theme. Color guard members wore different civilian costumes while populating four sets of moveable bleachers staged on the football field. Scenes changed with each new locale, linking together different peoples in an anthem of national unity and accord.

Watch Bluecoats' "... to Look for America" on Blu-ray disc

Inspiring the show and coming up several times throughout the production, the corps utilized Simon and Garfunkel’s song “America.” Written by Paul Simon in 1964 and recorded for the duo’s “Bookends” album of 1968, the song caught the essence of the nation during what was a troubling time of anti-war protests and dissatisfaction in the “system.”

Bluecoats’ journey commenced with the brass and percussion in a parade block, led by two color guard members carrying a “Bluecoats: Canton, Ohio” banner. Utilizing traditional close-order drill maneuvers, the horns and drums countermarched through each other in front of the reviewing stands as the color guard section spun silks representing the American flag. Traditional drumming permeated the block until the marching members formed “Old Glory,” the image of the American flag unfurled in the wind, with tubas as the upper left corner stars.

The corps performed brief snippets of Sousa’s “Washington Post” and “Stars and Stripes Forever” marches as they trooped off in four different directions. This was superimposed upon the solemn strains of Rufus Wainwright’s “Agnus Dei,” written in 2004 as the lead track on his album, “Want Two.” Typically part of a sacred mass, Wainwright said he created the song and the rest of the album in regards to the complications of “the world we live in.”

Noted minimalist Steven Reich utilized multiple digital samples of everyday sounds recorded around New York City for his 1995 “City Life,” a symphony for piano and digital sampler. The corps utilized the first movement, “Check it out,” the opening chorale of the piece, as well as more hypnotic elements of the work. The frenetic nature of this tune seemed to highlight the tensions between different peoples across the nation, superimposed over the solemn chorale of Reich’s first movement. 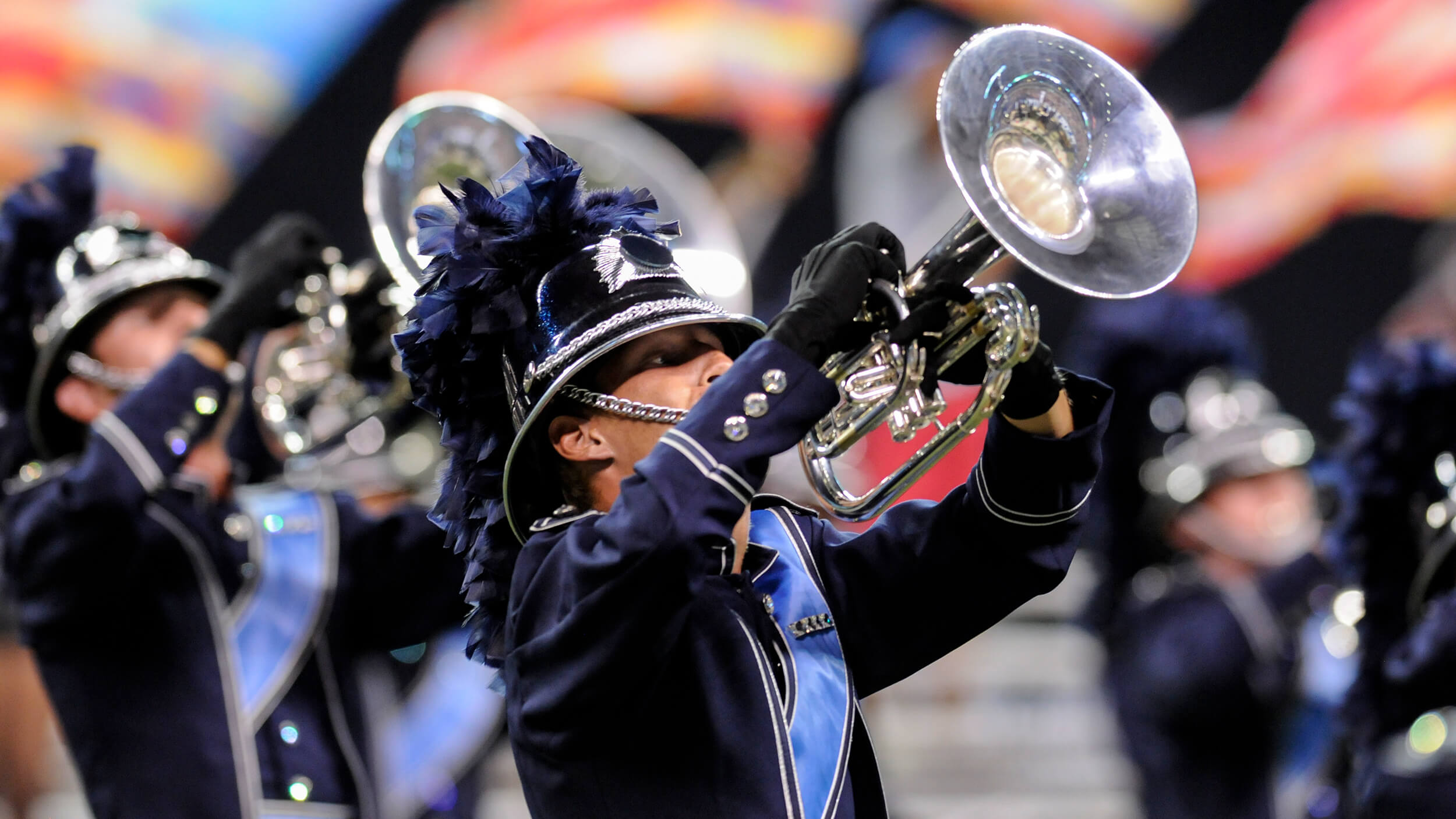 Color guard members laid out picnic blankets for a summer music festival concert in a park to “Spring,” the first movement of Duke Ellington’s “The River,” written on commission of the American Ballet Theatre for famed choreographer Alvin Ailey. The title, “Spring,” referred not to the season but to the physical stream that gave birth to the river. This movement was interrupted by an old-school drum cadence heard during that community’s parade.

A short snippet of Igor Stravinsky’s “Ebony Concerto” came next, written in 1945 for jazz clarinetist Woody Herman’s “First Herd” jazz band. That title refers to Africa, as Stravinsky was enamored with blues musicians.

This show segment created the ambience of being at a local carnival, further suggested by flags emblazoned with multiple-colored balloons and ending with tuba players facing backfield while punctuating the last note with their instruments between their legs.

The show closed with a rock concert complete with crowd surfing in a mosh pit, performed to “Concerto for Wind Ensemble, Mvt. V” by Steven Bryant, written in 2009. Perfect for putting an exclamation mark on the show, the composer wrote that this movement has “a simmering vitality that burns inexorably to a no-holds barred climax.”

Two parades collided as if ideas running into one another, coming together as different types of people resolved into a single parade block moving toward the audience. This act signifying Americans coming together to make the country work as one, with “America” and a tiny bit of Leonard Cohen’s “Hallelujah” heard in the background.

In the final visual of the production, the corps rebuilt the “Old Glory” set from the beginning of the show and marched past the bleachers, coming full circle in a demonstration that the commonness Americans have with each other is more important than the things that separate us.