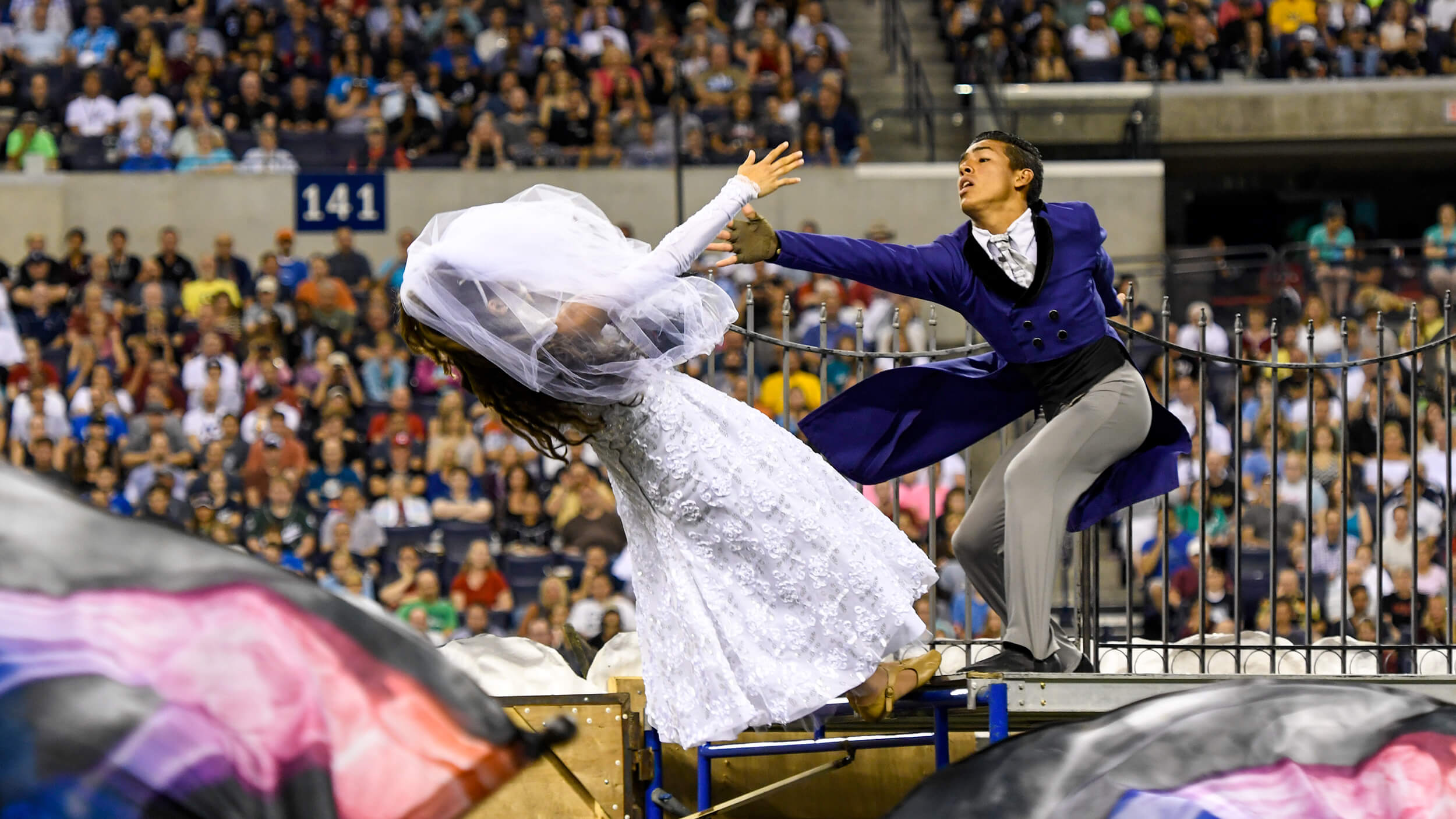 Brandt Crocker decided to have a little bit of fun when The Academy took the field for the last time in 2016.

By that point in the season, the DCI Hall of Fame public address announcer had introduced the Arizona corps at least a small handful of times. He and everyone else had watched the corps’ breakout summer that ended with history made in Indianapolis.

As such, before he could have his fun, he had to give The Academy its moment in the sun. After all, the corps had earned it.

So first thing was first — he reminded the crowd that this was the first time they’d ever seen The Academy perform as a World Class finalist since first fielding a corps in 2001.

Once that was over, and it was show time, the creativity came out.

Download audio and video from The Academy's "Drum Corpse Bride"

Over the years, there have been a handful of corps that have taken a leap and had special competitive seasons; almost always, it seems, those same groups become crowd favorites, both in terms of support for their scoring and response to their on-field production.

The Academy in 2016 was no exception; “Drum Corpse Bride” was an audience favorite from the get-go. It was a story most knew and many loved, told with music that many knew and loved, by a corps that many had grown to love through several years of whimsical, accessible and endearing designs.

In many ways, as was often the trend in the mid 2010s, The Academy kept its uniform look intact year to year, with slight changes in accents and features to match the one of its production.

2016’s presentation took the corps’ “tuxedo” look of the previous several years — a long, black jacket, black pants, and black shako — and added purple accessories by way of a vest, necktie and a ribbon wrapped around the headgear. All in all, the 2016 uniform was a blend of classy and spooky that perfectly welcomed The Academy’s identity into the Tim Burton aesthetic and world.

“Drum Corpse Bride” opened on a wedding scene, introducing the show’s main characters as a man and woman in love.

As brief, subtle front ensemble melodies from The Righteous Brothers’ “Unchained Melody” transition into Danny Elfman’s title music from "Corpse Bride," the two lovers and their many wedding guests dance their way into a sideways heart shape prior to the show’s opening impact.

It’s on that impact — which features compelling blasts of Chopin’s “Sonata No. 2, Op. 35 (The Funeral March)” — that the bride character meets her demise. She’s pushed off a tall prop — designed to look like a stone arch bridge — by a character cloaked in black, presumably representing death itself.

The story of the bride and groom’s journey into the land of the dead unfolds during the following movement, centered around Prokofiev’s “Romeo & Juliet.”

In the third movement, though, The Academy’s playful design creativity really begins to come to life — pun not intended. What had once been a set of chairs for the opening wedding scene have now been turned around to reveal gravestones, which bore the names of several fans, donors, and stakeholders within the corps’ community.

This sets the scene for a lively interpretation of Paul Dukas’ “Sorcerer’s Apprentice.” The recognizable melody is first presented by way of an intricate low brass feature that takes place throughout the graveyard.

Then, members of the front ensemble take center stage atop the many headstones, wearing — and playing on — vertical xylophones that are painted to look like rib cages. Ultimately, the skeleton front ensemble feature would go down as one of the more widely remembered moments from The Academy’s 2016 production.

Dark tones of “Funeral March” once again signify another death, rounding out an eventful and energetic middle section of the show with the groom character’s descent from the bridge that sealed his bride’s same fate.

In death, though, the two are reunited, and the song played at their wedding makes its fitting return. “Unchained Melody” fills out the final four minutes of the production, opening with a gorgeous flugelhorn solo before fading into lyrical chords from the hornline and eventually a full-corps impact finish.

As the final push reaches its climax, the corps forms a heart surrounding the two main characters, who embrace once again between the same rows of chairs from their marriage ceremony, bringing the story to its perfect full-circle ending.

Playing their characters even after the judges stopped their recorders and entered their final scores, the bride and groom enjoyed one final moment in the Finals night spotlight, when coming off the field the bride climbed atop the drum major podium to toss her Drum Corpse Bride bouquet into the stands, a souvenir for one lucky audience member.

The Academy spent the 2016 season racing — and, of course, winning — against history.

A year prior, the corps had finished in 15th place, meaning there were three corps along the leaderboard separating the Arizona corps from the Top 12 and a spot in World Championship Finals.

Early signs of potential began to glimmer when The Academy scored within two points of consistent finalists like Madison Scouts and Blue Knights. The Arizona corps got its first shot at one of the corps standing between it and a Finals bid — Troopers (13th in 2015) — in mid-July, and opened up a strong lead of about two points.

Ultimately, though, in order to make it to the Top 12, The Academy was going to have to knock out a 2015 finalist. That first head-to-head victory over a returning Top 12 group came at the DCI Southwestern Championship San Antonio, as the corps topped Boston Crusaders (10th in 2015) by about 0.7 points.

First-ever for The Academy after unpredictable Semis

That’s when it was abundantly clear — The Academy was on a mission. Coming out of the first meeting of all World Class corps, the Arizona corps held the position of 12th. It never looked back, and actually kept moving forward, ultimately pushing its way into 11th place by way of an early-August leapfrog of Madison Scouts which first occurred in Allentown.