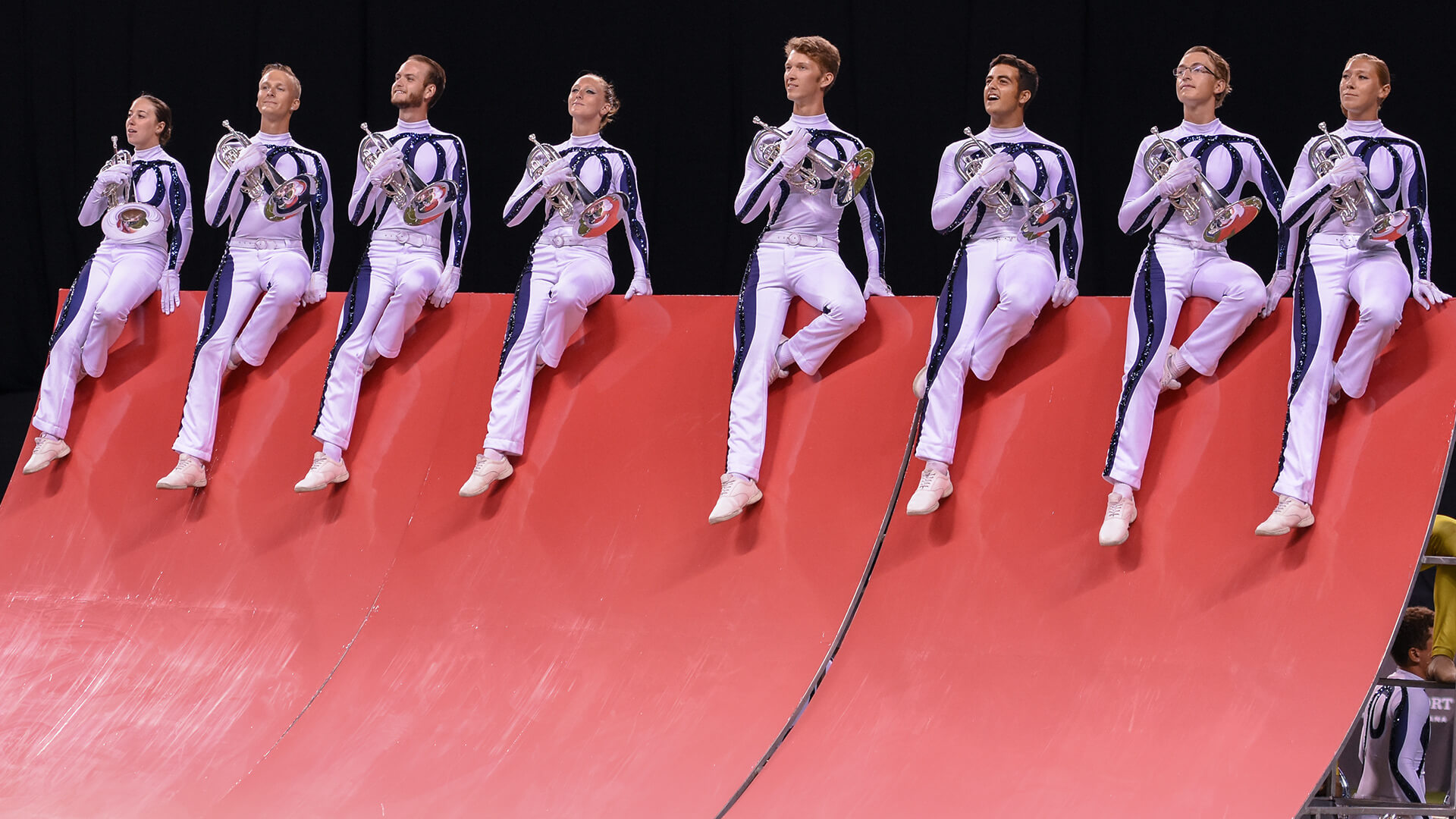 A lot of talk during the 2016 Drum Corps International Tour was about the unexpected charm of The Academy's "Drum Corpse Bride" production, which put the World Class corps among the top 12 of the DCI World Championship Finals for the very first time.

In 13th place after the Prelims competition, Boston Crusaders rallied to 12th, at the expense of the Madison Scouts who finished their season after the Semifinals for the first time since 2009.

Bluecoats owned the top spot for most of the 2016 DCI Tour, finishing first in 25 of 29 shows. The innovation of the corps' "Down Side Up" production helped the group earn top marks in the general effect caption on the score sheets, giving the corps a fourth tenths of a point edge over the second-place Blue Devils. 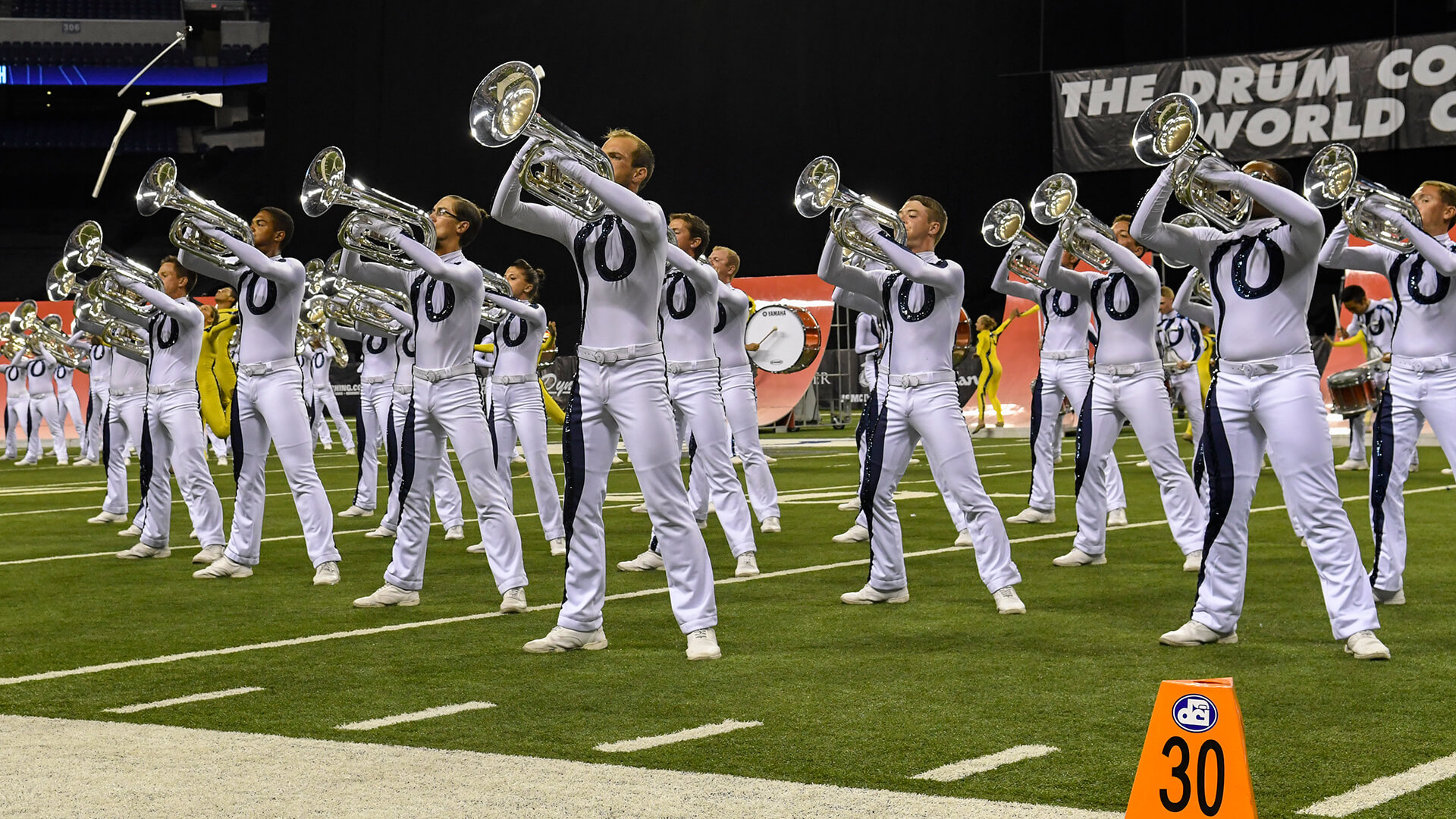 There were multitudes of unique elements to the "Down Side Up" visual program, many inspired by the contemporary British dance company, Motionhouse.

Some of the innovations included the corps ditching its traditional uniforms and headgear for slim-fitting white body suits. The corps also utilized massive red ramps that moved around the field throughout the production and created various different setups from which corps members could perform on and around.

Own Bluecoats' "Down Side Up" on Blu-ray disc.

The musical production integrated an eclectic variety of contemporary pieces that utilized 116 different brass instruments throughout the production including tenor and bass trombones.

The show got underway with "José/BeFORe John 5" by Hungarian composer Aurél Holló. The percussion work, which combines diverse Arabic and Gypsy musical styles with Spanish flamenco, opened with a single Bluecoats percussionist clapping an intricate rhythm. That expanded to include nine clappers atop four of the ramp segments, plus five additional percussionists off to the side on the field.

Most of the horn line then ran out from behind that set of ramps without their horns and performed an extensive series of angular body movements. The color guard members, attired in the same design of body suit as the brass and percussionists, but in yellow instead of white, gradually appeared from behind the ramps.

Meanwhile, mellophone players slid down the ramps and also ran into view from behind, playing the rhythmic keyboard theme from the original work that was based on traditional xylophone music of Uganda. 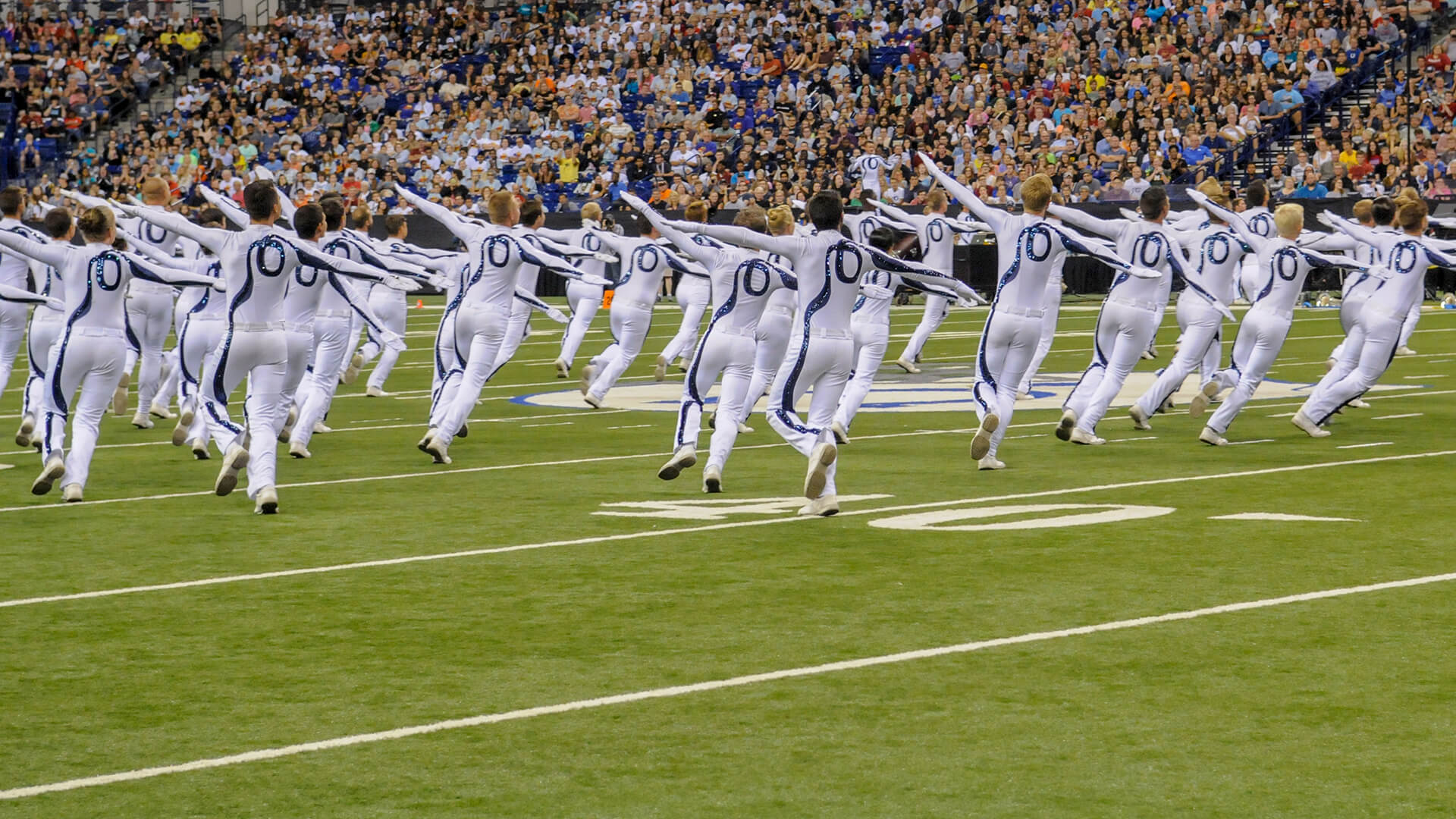 A blend of three more tunes were heard in quick succession next, starting with "Heat of the Day" by Pat Metheny and Lyle Mays, off the Pat Metheny Group's "Imaginary Day" album that won the 1999 Grammy Award for Best Contemporary Jazz Album. Metheny claimed the rhythmically complex piece, reflecting Balinese gamelan music, is "a journey into a musical zone that lets you imagine your own scenario and stories."

Bluecoats' arrangement of "Raga Raja" by Project Trio represented the second blended tune of this section. The piece came off the New York City chamber group's "When Will Then Be Now" album of 2012, which was inspired by the Hindu and Buddist lore of Rāgarāja, a wrathful god often pictured with many heads and arms. 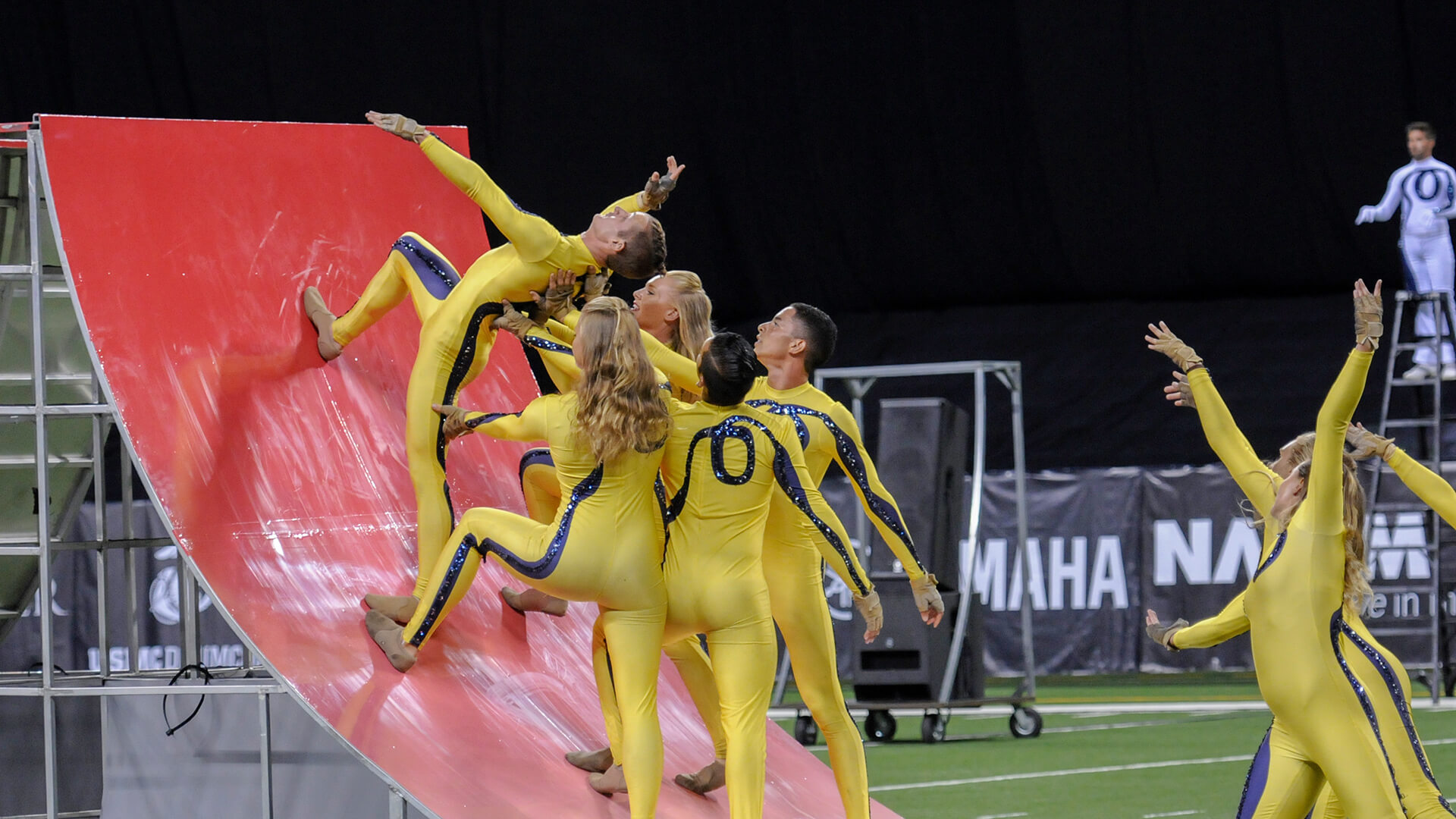 Various musicians and color guard members continued to climb up the ramps and slide back down. Throughout the production, the 10 ramps were often repositioned in different locations and at different angles, also configured in different combinations.

In an intriguing and seamless musical transition, the show segued into the emotive and haunting "Great Gig in the Sky" from Pink Floyd's famed 1973 concept album, "Dark Side of the Moon." The fifth track off the album grew out of the "Mortality Sequence" chord progression by band member Richard Wright.

Bluecoats opened the piece with that simple chord progression played on a synthesizer in the front ensemble percussion section, which led into an evocative flugelhorn solo played atop one of the ramps. The piece reached a climax with a screaming trumpet solo, immortalized for fans when the performer winked at the on-field camera during the live broadcast of the corps' Prelims performance, reaching a nationwide audience.

Rounding out the production, corps brass arranger Doug Thrower composed "Down Slide Up," which started with an amplified trombone quartet. That quickly led into the furious "Todo Tiende" that came off "Techari," the 2006 flamenco/hip-hop album by Ojos de Brujo, a nine-piece band from Barcelona.

A memorable moment featured color guard members sequentially climbing six adjacent sections of ramp and sliding down as if riding the crest of a wave, followed by flags that were tossed from behind and caught in front of the ramps.

The ending of the show was a glorious cacophony of trombone smears and in-your-face brass. Horn line and color guard performers climbed and descended the ramps, and thundering percussionists were on the verge of breaking their drumheads.

When the dust settled, members of the Bluecoats earned their very first World Championship title, becoming just the 10th corps to do so since DCI's founding in 1972.

"Down Side Up" audio and video downloads