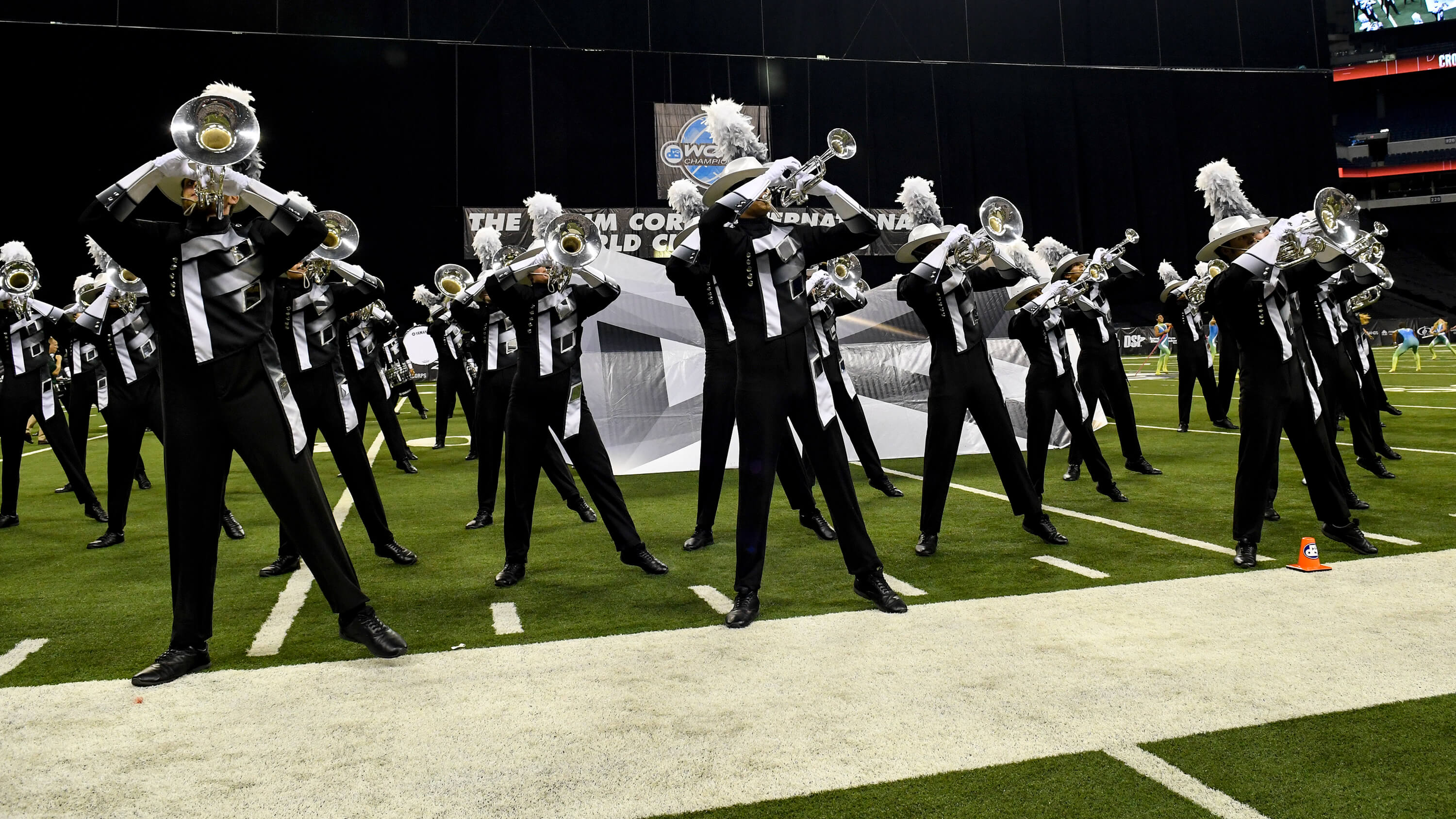 No corps dominated the 2016 Drum Corps International Tour like the Bluecoats, winning 25 of their 29 contests.

Still, Bluecoats won the DCI World Championship Finals by only four tenths over Blue Devils’ take on Shakespeare’s “The Tempest” and scored just over a half a point ahead of Carolina Crown’s tale of vengeance and mercy in the Old West. Despite the fact that Bluecoats won all 11 shows heading into the Finals, the title looked to be up for grabs until the very end.

Fourth, fifth and sixth place went to Santa Clara Vanguard, The Cavaliers, and The Cadets, while The Academy earned its very first top-12 finish as a World Class corps with its popular “Drum Corpse Bride” production.

Finishing in 10th place, the Crossmen presented their show titled, “Continuum,” inspired by the mystifying visual patterns of 20th-century Dutch graphic artist M.C. Escher, the illustrator who amused fans with staircases that rise up while descending, upward-flowing waterfalls, and multitudes of equally baffling images. With music and visuals walking the line between the fresh and the familiar, this was possibly Crossmen's most innovative show ever.

Watch the 2016 Crossmen on Blu-ray disc

Arranger Andrew Markworth based his original music on melodies from Italian Baroque composer Antonio Vivaldi’s “The Four Seasons” from the early 1720s. Vivaldi attempted to evoke images of the four seasons through his melodies, inspired by paintings created by an Italian artist. Consequently, his four concerti for solo violin accompanied by string ensemble and harpsichord are regarded as one of the first examples of program music.

Markworth also drew inspiration from “Recomposed by Max Richter: Vivaldi—The Four Seasons,” a 2012 album by contemporary composer Max Richter. Like Markworth, Richter received inspiration from Vivaldi’s four concerti, but put an indelible modernist stamp on the music by running melodies and various musical segments through assorted electronic effects, looping the music into repetitive patterns and creating phasing by having performers play the same music, but slightly off from one another. Markworth had Crossmen duplicate the phasing through stereo panning effects, having the sound move across the field from left to right and vice versa, which required intense communication between the music and visual creative teams.

Markworth wrote, “My idea was to do my own version of [the Vivaldi] and make it more modern and appropriate to the Crossmen style. Sometimes I would just use a fragment of a Vivaldi melody and create a new melody off of it. Sometimes the Vivaldi only appeared in a background voice.” 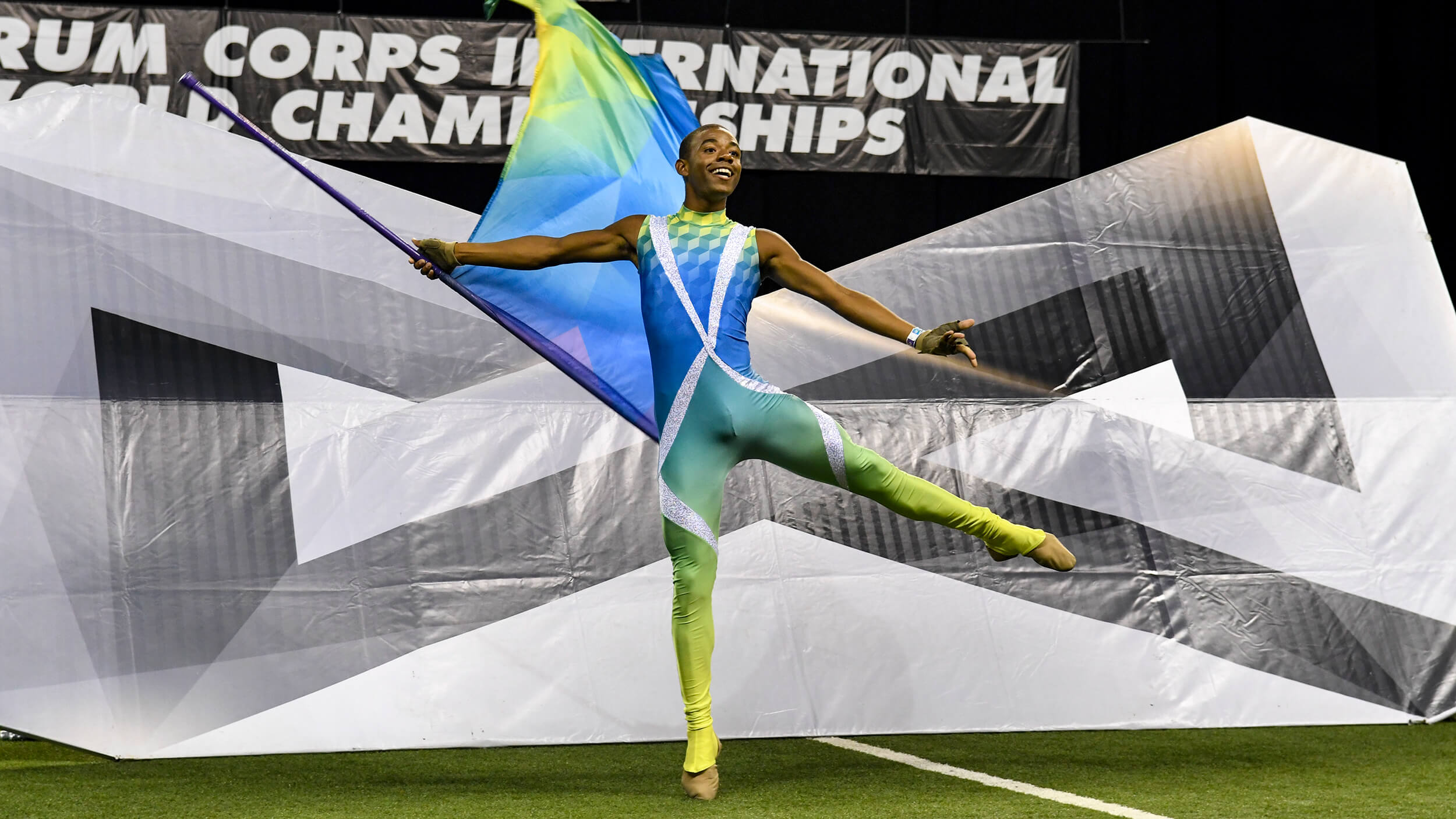 “Continuum” ran as one continuous piece that followed the same order as Vivaldi’s sections; “Spring,” “Summer,” “Autumn,” and “Winter.” Markworth's music teetered between the sublime and glamor worthy of a Hollywood production, the erudite and kitsch.

It was a joy ride of perpetual motion through many moods, punctuated by a rainbow of colors from the color guard performers who floated into view and then seemed to morph into a sea of minimalist whiteness. Six large sets depicting squared off infinity signs helped to create an aural image of infinity on the football field.

The show opened with the brass section spread across the entire length of the field in a straight line that morphed into a continuous sine wave, followed by several horns creating a typically-rounded infinity loop (a sideways figure 8) on the way to pinching the corners to duplicate the six large sets that dotted the field. The music layered a canon atop Vivaldi’s recognizable “Spring” motif, with the drumbeat turning the piece into something resembling progressive rock.

The movement influenced by Vivaldi’s “Summer” saw the entire horn line create another squared off infinity symbol, leading into a front ensemble feature based on the original’s virtuosic violin lines, laid over a wobbling dubstep bass sound. During this the brass players mutated the corps’ Maltese Cross logo with quick-paced geometric forms.

The segment influenced by “Autumn” strayed the furthest from Vivaldi’s original with a breezy light jazz feel. The color guard members in the backfield broke out large banners of various pastels and long white triangular silks that united to form the outline of a squared infinity symbol. An amplified jazz trombone solo sailed over the chordal background, leading into the most intriguing moments of the color guard presentation. Flags up front stretched across the field in a shifting spectrum of the color wheel, spun one direction to display the changing colors left to right, then turning to display the same colors right to left. Although it was apparent that silks of back-to-back colors made the effect possible, the simplicity of the effect never failed to mesmerize.

The final movement based on “Winter” commenced with a descending electronic drum pattern, leading into an extended percussion feature. The brass section came in with the articulate motif recognized from so many television commercials, but enunciated in a quick 7/8-time signature. Another squared infinity symbol in the drill formations eventually led to yet another such form, the horn players moving back into the sine wave that appeared near the start of the program and running the opening maneuver backward into a straight line.

The show ended with the brass performers spread across the entire length of the field in a straight line that morphed into a continuous sine wave as flags, each dyed with the same color spectrum, sequentially spun across the line left to right. A lone color guard member ran off the field into a tunnel with a large billowing white silk fluttering behind her, the colors of the spectrum dissolving into pure white as if light was processed through a prism in reverse.