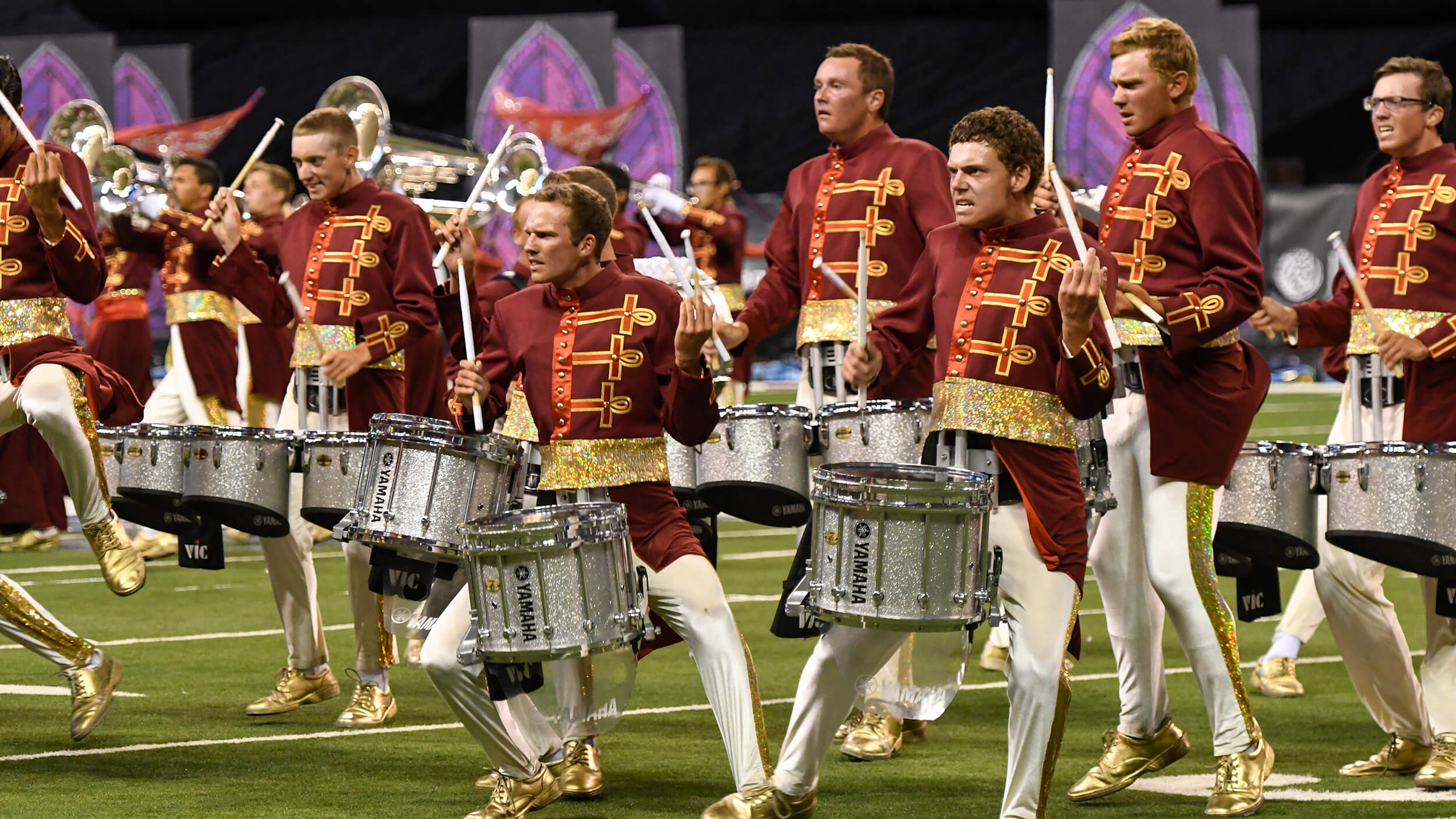 An eight-person vocal choir may have been the most obvious ingredient of The Cadets’ seventh-place “The Faithful, The Fallen, The Forgiven” production. It was something the corps’ creative staff had considered for years, but only a revisit of Leonard Bernstein’s “Mass” made it possible.

Watch "The Faithful, The Fallen, The Forgiven" on Blu-ray disc

A familiar composer to the corps, The Cadets first played music from “Mass” in 1983, the year of the corps’ first DCI World Championship title. They once again played selections from the theater production during their 1990 title-winning “A Bernstein Celebration” show.

Bernstein originally titled the 32 movements of his work as “Mass: A Theatre Piece for Singers, Players, and Dancers.” President John F. Kennedy’s widow Jacqueline Kennedy commissioned Bernstein to compose the work for the 1971 grand opening of Washington D.C.’s enormous John F. Kennedy Center for the Performing Arts. Jacqueline had expected Bernstein to compose a traditional mass, and so did Bernstein himself. But then Andrew Lloyd Webber’s 1970 “Jesus Christ Superstar” rock opera shook up the music world, leading Bernstein to turn to pop composer and lyricist Stephen Schwartz of “Godspell,” a smash hit Gospel musical that had also opened earlier in 1971.

Most initial reviews of “Mass” were unrelentingly savage; the reviewer for the New York Times accused Bernstein as being “a musician who desperately wants to be with it.” Numerous Roman Catholic churches condemned the work and some even succeeded in keeping the travelling production from playing in their communities. Time has been much kinder and now “Mass” is generally considered an important link in the evolution of American musical theater. And in 2000, Pope John Paul II requested and received a performance of “Mass” at the Vatican.

Cadets’ show opened with the full corps in the formation of a diagonal cross in “Devotions: Kyrie Eleison.” 32 muted purple stained glass windows were spread across the back of the field and 24 risers doubling as church pews were set off to the left of the front sideline. 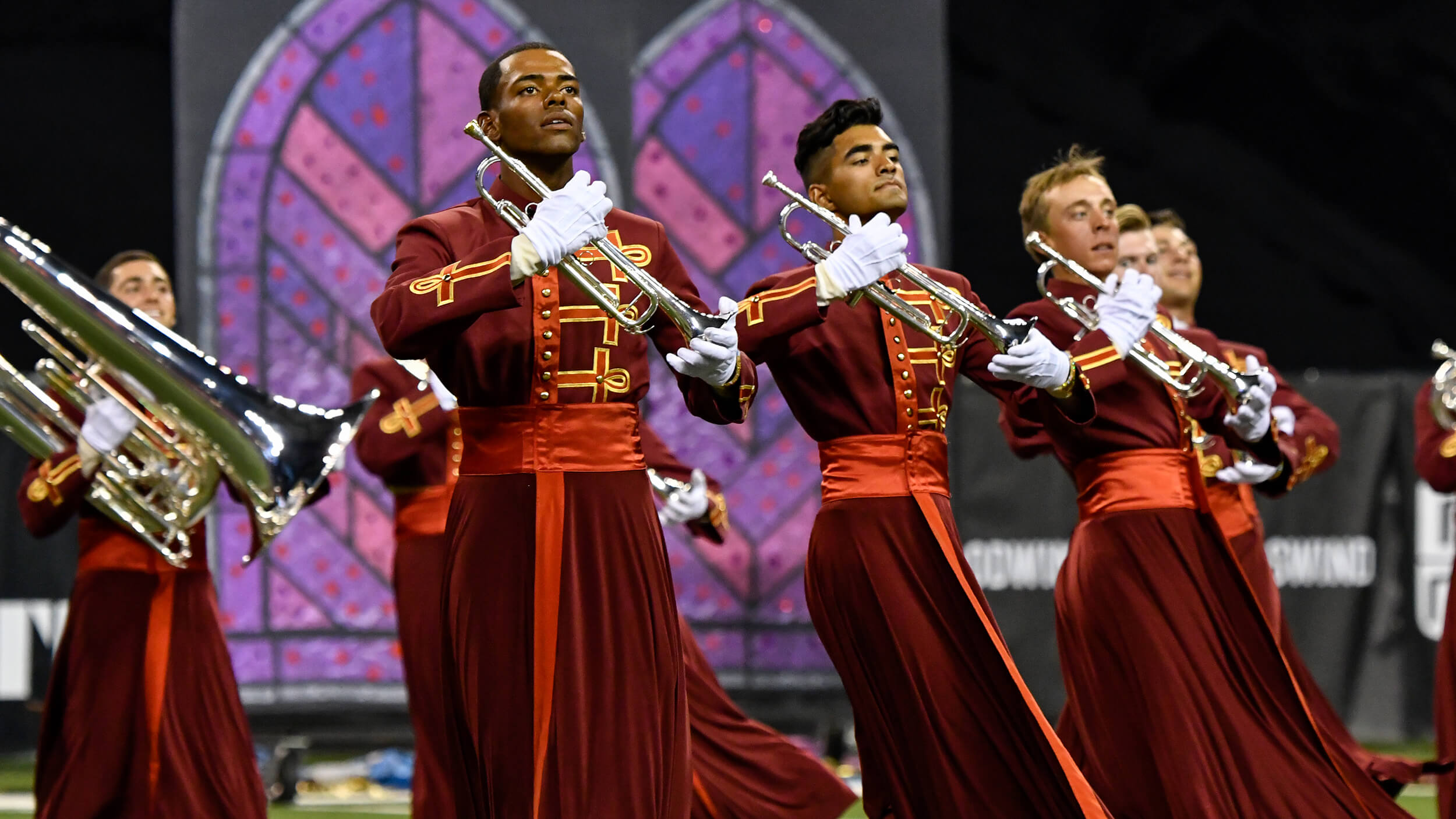 A robed Celebrant kicked off the show by proclaiming, “In the name of the Father, the Son, and the Holy Spirit.” As the corps rapidly scattered to the unfurled golden flags printed with Scripture, the chorus sang lyrics from “God Said,” the corps’ concert standstill production from 1983.

During the first part of the show, the corps’ horn line wore long priest-like maroon robes, with the drums wearing maroon pants and the color guard members attired in long flowing golden skirts.

A female vocalist next sang the lyrics to the lovely ballad, “Simple Song.” With the guard dancing at the pews, the horn line formed an Ichthus, the ancient Greek symbol of two intersecting arcs resembling a fish. 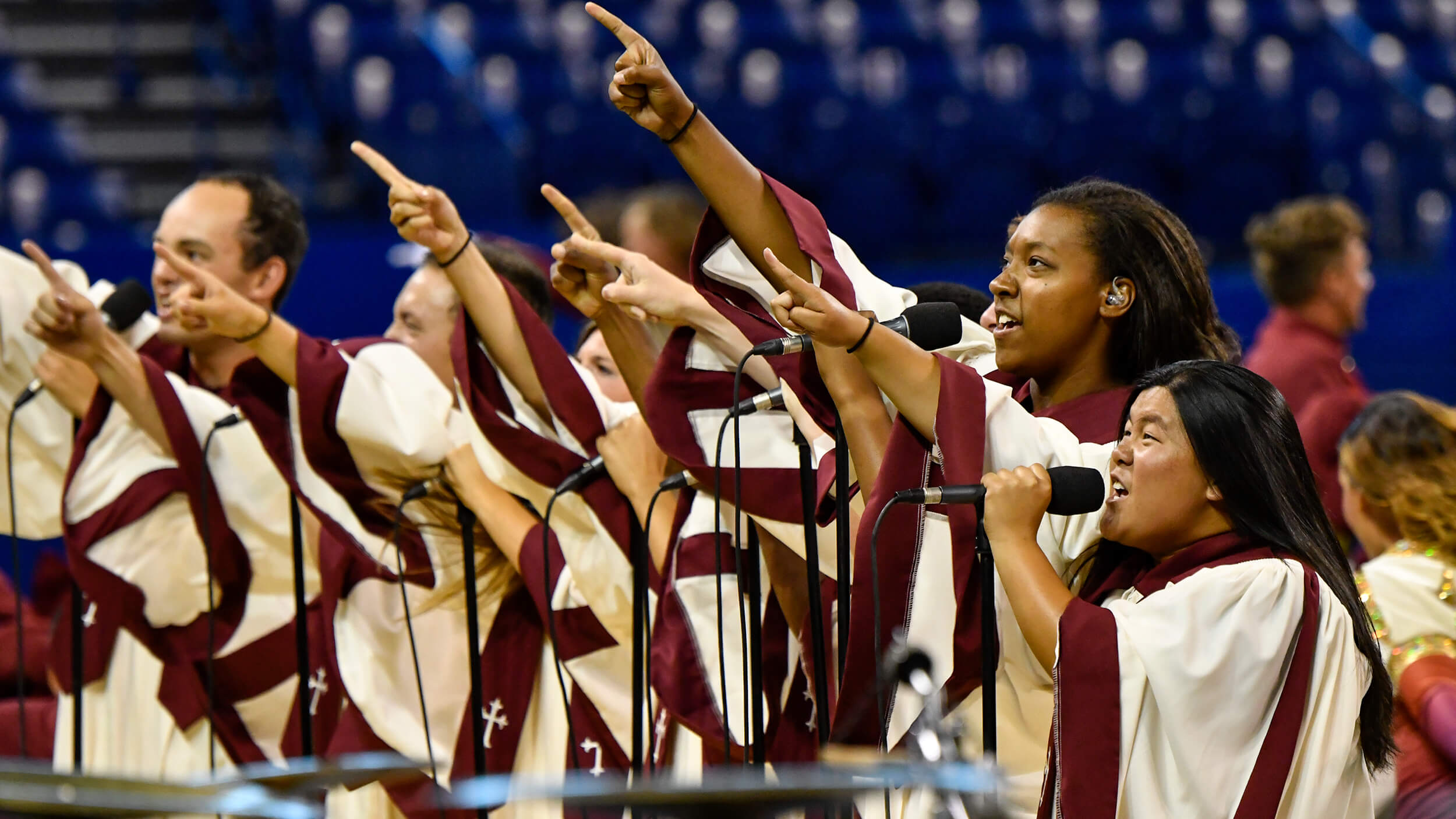 The return of the Celebrant introduced “Agnus Dei,” the most purely drum corps-like tune in the show, rather angry in character. Due to the quicker movement, the color guard members lost their skirts, revealing leggings printed with scripture.

A piccolo trumpet introduced the Celebrant intoning the words of “Meditation No. 3, De profundis,” the Latin term meaning “from the depths,” typically, an intense cry expressing deep feelings of distressful torment. Several trombones atop the pews conveyed brassy angst as members of the upper brass came out from behind the stained glass windows wearing white pants with wide golden stripes earlier hidden under the long robes. The drums were now also wearing the same type of pants for their big extended feature of relentless fury.

“Dona Nobis Pacem” was interspersed with some of the extremely raucous and flippant horn parts as the vocal ensemble proclaimed their increased separation from the Creator they no longer understood or respected. This was one of the more controversial elements of “Mass” during its early years. People were shocked that even a creative take on the Roman Catholic mass would include an extended section of people pulling away from God. However, as in Cadets’ show, people and their deity were pulled apart so the shattered elements of faith could be put back together in a spiritual rebirth. 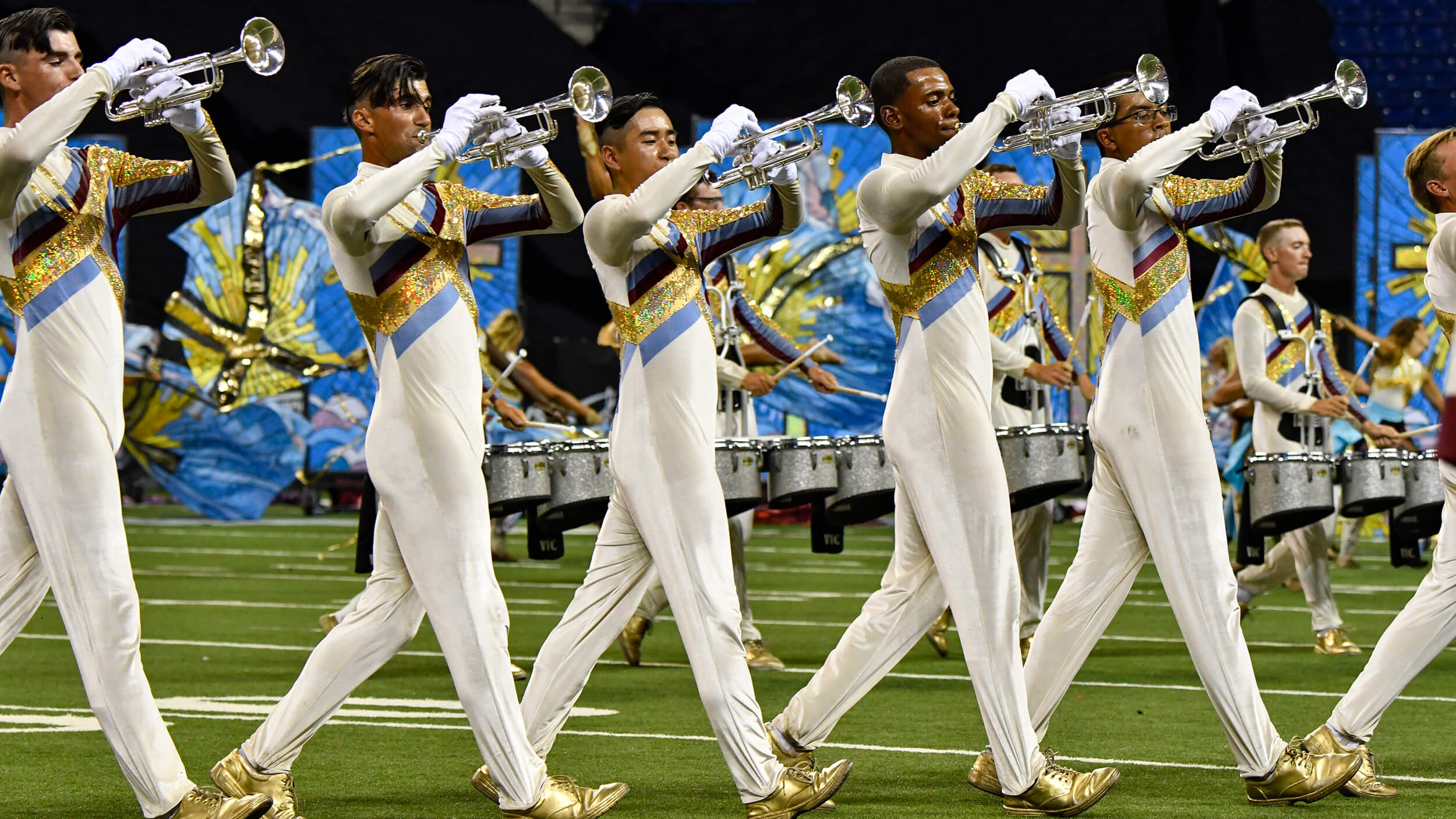 By now the guard uniforms transitioned to a plain top and some musicians were starting to rip apart their costumes in front of the audience. It was total anarchy with boisterous brass outbursts and a feeling that things had gone so far that faith could never be restored. But as quickly as the discordant music and lawless visual eruptions reached a feverish pitch, a single cross was thrust in the air and many fell to the ground as the vocal ensemble rose out of the ashes with “Almighty Father,” a sweet and haunting chorale of simple praise that ended Bernstein’s original production.

The corps now wore simple body suits emblazoned with an Ankh, the Egyptian cross with a closed loop at the top instead of a continuation of the straight line from the bottom. The same form was subtly referenced in the termination of the horizontal braids of the musicians’ original costumes.

As the Celebrant asked for the forgiveness of the sins of all, the corps transitioned into “Pax: Communion (Secret Songs),” an emotionally plaintive piece that reestablished spiritual roots just as witnessed in the original version of “Mass.” Two vocalists re-created the duet between the Celebrant and his young assistant in an emotional proclamation that brought tears to the eyes of many in the audience.

Plain purple flags, the same colors as the stained glass window stage sets, gave way to immense flags duplicating the illuminated cross design of the large posters that appeared when the windows were flipped over. The costuming throughout the corps was now mostly white, symbolizing purity and forgiveness.

After the Celebrant proclaimed, “The mass is ended. Go in peace,” the horns formed and dissolved three crosses representing those of the crucifixion on Calvary outside the wall of Jerusalem. Six huge bells rang out as the horns played a loud and victorious plagal (Amen) cadence in a company front to end the show.

Interestingly, the show was not intended to be a statement about religious values, but fans inevitably attached their own meanings based on their own experiences. Some regarded it as a celebration of devotion while others didn’t feel quite so warm and fuzzy. As such, “The Faithful, The Fallen, The Forgiven” replicated the myriad emotions and meanings individuals bring to their own sense of faith.